Sen. Rand Paul’s Wife: ‘I Now Keep A Loaded Gun By My Bed’

Sen. Rand Paul’s Wife: ‘I Now Keep A Loaded Gun By My Bed’ – We Are Not Heading Toward Civil War, We Are Already Fighting It – Prepare Now Because it Is Going To Get Far Worse By Susan Duclos – All News PipeLine

The latest hysteria over the upcoming vote to confirm Judge Brett Kavanaugh to the Supreme Court can be seen in the over-the-top reaction to Senate Majority Leader Mitch McConnell’s decision late Wednesday night to file a motion to invoke ‘cloture’ on Kavanaugh’s nomination, a step which will lead to a final weekend vote, but in the bigger picture look at events, this whole Kavanaugh spectacle is just another phase of the civil war this nation is now in the midst of.

Civil war is simply a war between citizens of a country and that is exactly what we are seeing. It is time to stop saying we are heading towards a civil war and to admit that we are already fighting it. There has already been blood in the streets, literally, as we have seen a mass shooting at a baseball practice where an unhinged leftist opened fire on GOP members of Congress back in June 2017, critically injuring House Majority Whip Steve Scalise, R-La., and injuring three others.

We have seen countless videos and images of Conservatives harassed, beaten, attacked and bloodied. Bike locks to the head, property destroyed during riots, women maced, teenagers attacked for wearing a MAGA hat in public, Republican politicians attacked in their own yards, heckled and driven out of restaurants.

Breitbart’s Rap sheet of media approved harassment and violence against conservatives, shows 567 incidents since September 2015 until September 11, 2018, with 169 in 2018 alone.

Since September 11, 2018, as Stefan Stanford highlighted on Wednesday, the harassment and violence has continued unabated and is occurring with increasing frequency.

This morning I read a heartbreaking open letter to Booker from Kelley Paul, the wife of Senator Rand Paul. A woman who was terrified when news of the GOP baseball practice shooting broke until she heard her husband was alright, followed by her husband being attacked in their own yard, suffering five rib fractures including three displaced fractures.

She had her open letter published at CNN (archive is link here) and the very first paragraph includes the quote I used to begin my headline when she explains to Booker “It’s nine o’clock at night, and as I watch out the window, a sheriff’s car slowly drives past my home. I am grateful that they have offered to do extra patrols, as someone just posted our home address, and Rand’s cell number, on the internet — all part of a broader effort to intimidate and threaten Republican members of Congress and their families. I now keep a loaded gun by my bed. Our security systems have had to be expanded. I have never felt this way in my life.”

Think about that…. A mother of three, a woman that maintains a board position at Helping Hero, a charity that builds homes for wounded war veterans, so terrified that she has to sleep with loaded gun by her bedside.

Mrs. Paul goes on to describe what the last 18 months of constant threats and intimidation have been like for her and her family, and she concludes with a plea to Booker:

Senator Booker, Rand has worked with you to co-sponsor criminal justice reform bills. He respects you, and so do I. I would call on you to retract your statement. I would call on you to condemn violence, the leaking of elected officials‘ personal addresses (our address was leaked from a Senate directory given only to senators), and the intimidation and threats that are being hurled at them and their families. 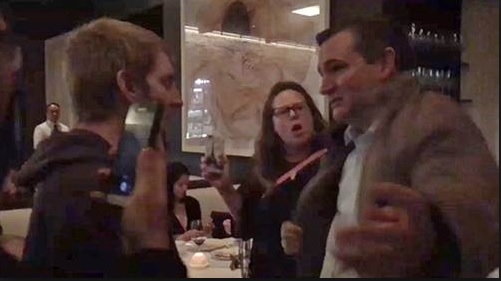 A week-and-a-half ago Republican Senator Ted Cruz and his wife were harassed at a restaurant by anti-Kavanaugh protesters from the Antifa group Smash Racism DC, and Mitch McConnell was accosted at an airport. Other Senate members are being accosted  and threatened in the Senate building by protesters, which has forced Capitol Police to boost their security.