Media Terrorizing America: Inciting Liberal Rage Over Kavanaugh Confirmation Is A Perfect Example Of Why Millions Consider The MSM To Be The ‘Enemy Of The People’

Media Terrorizing America: Inciting Liberal Rage Over Kavanaugh Confirmation Is A Perfect Example Of Why Millions Consider The MSM To Be The ‘Enemy Of The People’ By Susan Duclos – All News PipeLine

Google defines the term terrorize as “create and maintain a state of extreme fear and distress in (someone); fill with terror. Merriam Webster’s first definition is “to fill with terror or anxiety.”

Both definitions accurately describes the tactics used by the majority of the liberal, establishment media, from the biggest online publications such as NYT, Washington Post, ABC, NBC etc… to the TV talking heads over at CNN, MSNBC, etc… with the latest example being the whole confirmation circus surrounding Supreme Court nominee Judge Brett Kavanaugh.

The MSM has terrorized millions upon millions of Americans consistently over the past two years, from blaring headlines about tens of thousands dying if the (insert any actions taken by the Trump administration or GOP-controlled congress) or how the Internet will die if Net Neutrality is repealed, yet here we all are, on the Internet, nearly four months later.

The examples go on and on, but after watching this whole Kavanaugh saga play out, resulting in violence, death threats, screaming protesters, much of which was detailed on Wednesday by Stefan Stanford, by people who have been incited by the MSM on behalf of the Democratic party.

When Democrat politicians vowed to oppose Kavanaugh with “with everything I’ve got,” what many still do not understand to be part of the Democrats’ arsenal is, and has been, the liberal establishment media.

Flashback to the headlines when Judge Kavanaugh was first nominated, how the media instantly knew how to terrorize feminists across the nation by claiming Judge Kavanaugh would be the end of Roe Vs Wade, without any proof of such an assertion. We’ll use the liberals favorite word for that, the MSM blew the “dog whistle” to steer the angry liberals in the direction they wanted them to move, which was right into protests.

They turned in their pink pussy hats and changed into “hand maiden” costumes to imply that if Judge Kavanaugh was confirmed to the Supreme Court, he would automatically send women’s rights back 100 years. Because nothing seems to be more important to liberal feminists than the unhindered ability to murder babies in the womb. 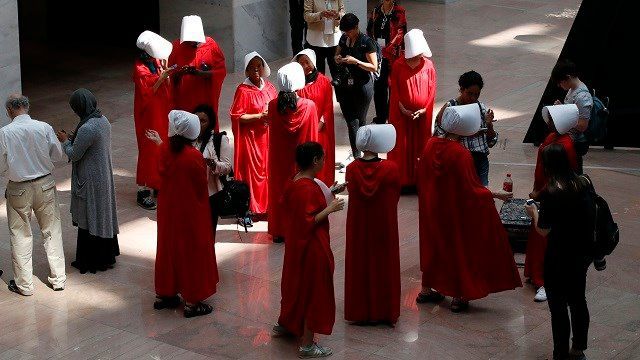 After Judge Kavanaugh sailed through the confirmation hearings, the next phase of the establishment media’s opposition campaign began, we will call it the “character assassination” phase.

Washington Post launched “campaign character assassination” by reporting on Christine Blasey Ford, claiming that over 35 years ago,  she was assaulted by Kavanaugh while at a party. No details were provided as to where the party was, when the party occurred, how she got to the part, how she got home….nothing, she didn’t remember any of it, and the Washington Post didn’t bother trying to validate or debunk her claim in any meaningful manner, because it didn’t matter to them, just smearing Judge Kavanaugh mattered.

Had they done even the most basic research before charging ahead with that report, they would have found out that none of the witnesses Ford claimed were present would corroborate her story.

There is also no mention in the Wapo report that when Ford originally spoke with them via text on July 6 she described the incident as happening in the mid-1980s, (which was highlighted in Ford’s senate testimony by the sexual crimes expert prosecutor who was questioning Ford for the GOP) yet in the September article on Wapo, the story had already changed and it is described as “one summer in the early 1980s.” They ignore that Ford’s therapists notes, which the writer of the Wapo article claims Ford showed her, but Ford says she doesn’t remember showing her, also highlighted the mid-1980s.

Via PowerLine, we have a visual representation of these changing timelines:

Margot Cleveland over at USA Today highlights the significance of this and why Ford’s stories changed in regards to the years in question from 2012, 2013, and the the July 6 references to “mid-1980’s, while she was in her “late teens” to suddenly changing it to the “early 1980s.”

First, Ford’s testimony that the assault occurred in the summer of 1982, when just 15, conflicted with both her therapist’s notes and the text message Ford sent to the Washington Post. According to reporter Emma Brown, Ford claimed she had been assaulted in the mid-1980s; and the therapist’s notes stated Ford had been the victim of an attempted rape in her late teens. But by that time, Kavanaugh was attending Yale, so Ford’s recasting of the attack to the summer of 1982 is suspect.

Her story changed after Senator Dianne Feinstein “recommended” an attorney to Ford.