After the Senate Judiciary Committee voted to move the Supreme Court nominee Judge Brett Kavanaugh to the full Senate for a confirmation vote, President Trump gave the Democrat politicians exactly what they asked for, ordering a “supplemental”  FBI investigation to update Judge Kavanaugh’s file.

“I’ve ordered the FBI to conduct a supplemental investigation to update Judge Kavanaugh’s file,” Trump said in a statement. “As the Senate has requested, this update must be limited in scope and completed in less than one week.”

This one week delay sent conservatives heads’, mine included, collectively crashing to our desks, but after seeing the FBI immediately start contacting the first two accusers, as well as the collective whining by liberals and Democrat politicians, I have begun to see the method behind the madness.

Senator Jeff Flake, the spineless Republican on the Judiciary committee, who delayed the committee vote then requested the FBI be given a week to supplement their FBI report on Judge Kavanaugh, before voting with the committee Republicans to move the nomination forward to the full Senate,  is a blight on the party, and one that thankfully will not be running for reelection.

With that said, his request could have been ignored, but it did manage to offer other spineless RINOs (Republican In Name Only), such as Susan Collins and Lisa Murkowski, political cover to vote for Judge Kavanaugh after the FBI is finished, something that was not guaranteed before President Trump’s calculated decision to order the limited FBI action.

With the GOP only holding a slim 51-49 majority in the Senate, there isn’t much wiggle room for Senate Majority Leader Mitch McConnell to lose any Republican votes. If there were to be a 50-50 vote, then VP Pence would be the tie-breaker. 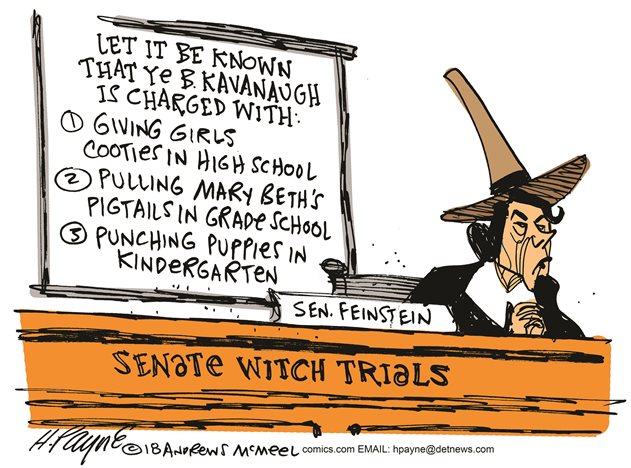 PULLING THE RUG OUT FROM UNDER THE DEMOCRATS

Since the first accuser, Christine Blasey Ford, crawled out from under her rock, Democrats and liberals across the internet consistently screeched that the FBI should “investigate.”

Since the four people that Ford claimed was present when she was allegedly assaulted (she claims she was held down, groped and Kavanaugh put his hand over her mouth) all denied knowledge or memory of the “party” or gathering she described, and all are willing to tell the FBI the same thing, and since Ford could not remember exactly where or when this alleged incident happened, the FBI really doesn’t have much to “investigate.”

Ms. Leland Keysey, Ford’s longtime friend has issued another statement, under penalty of perjury, to the Senate Judiciary Committee, stating she would cooperate with the FBI investigation, but that she still has no recollection of the incident in question. 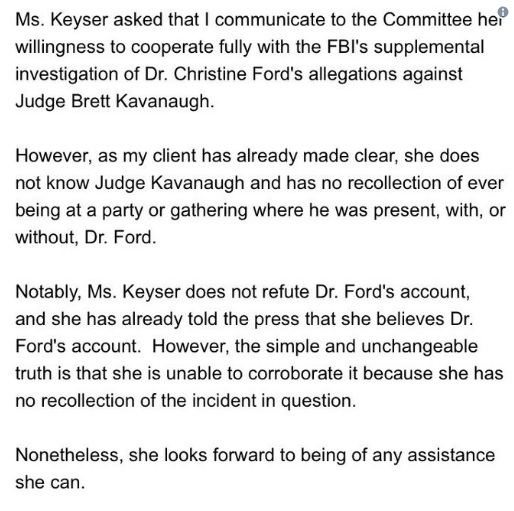 As to the second accuser, Deborah Ramirez, who is part of the scope of the FBI investigation, her claim was that at a college party, while she was drunk and on the floor, Judge Kavanaugh exposed himself to her, an event that no one else could corroborate ever having happened, nor could anyone say Kavanaugh was even present, again we have a situation where the FBI is left taking her statement, but unable to “investigate” any details. According to the NYT, Ms. Ramirez had also told friends she could not be sure it was Kavanaugh who exposed himself, and only “remembered” it was him after six days of having her memory “prodded” by Democratic operatives and her lawyers.