In this September 20th story over at Technocracy News & Trends which Steve Quayle linked to on his website days ago they reported that China’s new dystopian ‘social credit system‘ has been fully switched on and as we see in this must-read new story over at ABC News in Australia, China’s new system is something straight from a science fiction movie or the ‘fictional’ TV show “Person Of Interest”.

Featuring artificial intelligence within cameras using facial recognition technology following EVERYBODY, where ever they go, as we see in the gif images we’ve created from that story embedded above and below, ‘social credit scores‘ are also updated in real time as the people of China shop and go about their daily business, with a bottle of alcohol or beer merely placed into one’s shopping cart triggering an immediate lowering of one’s score while purchases of ‘healthy’ items raises one’s score in real time.

Also penalizing people for behaviors such as jaywalking, stealing or other crimes caught on camera, this recent story from News.com.au reported China’s chilling new dictatorship has been constructed to quite literally control everyone there, with citizens in China now monitored 24 hours a day, 7 days a week and scorecards ranking the Chinese people on ALL of their behaviors.

Also reporting that this ‘digital dictatorship‘ being constructed all around China’s 1.4 billion people will bring privileges and rewards to those who ‘behave themselves‘ while ‘punishing‘ others who may step out of line, they also warn that China’s vast network of over 200 million CCTV cameras spread throughout the country will ensure that there are ‘no dark corners in which to hide‘.

And while one might ask ‘why should we care‘ about something happening now half a planet away from us, it’s easy to see why America may not be too far behind China, with a similar vast array of CCTV cameras already set up all across the nation and what appeared to be a totalitarian global government being created all around us before our eyes.

And one could easily argue that we’re witnessing the rollout in China of the ‘mark of the beast system’ as while the people there haven’t all been voluntarily microchipped, the results of the social credit system there are largely the same. As Skywatch TV reported back in July in their story titled “MORE BETA TESTING FOR THE MARK OF THE BEAST? Welfare Recipients To Undergo FACE SCANNING In Order To Receive Payments—Complete “Digital Government” Within 7 Years“, we too are rapidly going in that direction.

As Jeremiah Johnson reports in this new story over at SHTFPlan, the three phases from surveillance to totalitarianism are happening right now right here in America and sadly, should we allow them to play out to their end game, the result will be a boot forever stamping upon our human faces.

And as we see detailed below, the system in China is absolute ripe for abuse with one journalist who exposed high level Communist party corruption having his life destroyed by ‘the system‘, making him one of nearly 10 million who’ve already been ‘blacklisted’ by ‘the beast’. First, from Johnson’s must read story:

Over the past year and a half, I’ve written many pieces on the surveillance state and how we are one step away from the inculcation of technological “omniscience” pertaining to control. The objective is not simply “control,” as they have already obtained that for the most part: limiting cash withdrawals from the bank, restricting your movements and business outside of the country, and new laws being created by the day. This latter part is akin to a “tag team” event of WWF: what the feds can’t or won’t do, they “tag” off for the states to accomplish, with local governments following suit.

The objective is total control: over everything you read, hear, and watch in the (so-called) media, and an eyeball on you in every facet of your life.

Mac Slavo released an article on SHTFplan entitled Apple is now giving people trust scores based on their calls and emails on 9/21/18. This is an example of how tech firms in the U.S., in conjunction with one another and other American business entities are instituting social engineering by controlling our communications via social media.

The big picture is much more frightening, as this article comes on the heels of another, more insidious occurrence: a nationwide “scoring system” instituted in the largest surveillance state in the world…communist China. 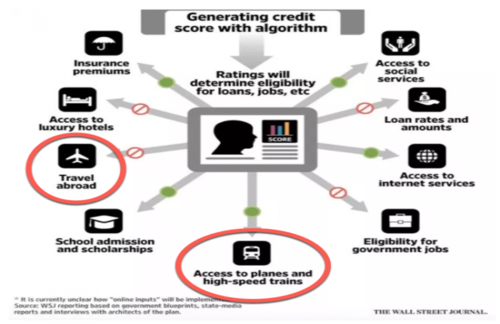 And while America hasn’t yet fallen to the same level of technical tyranny that China has, as Johnson’s story pointed out, we’re rapidly being herded like sheep in that direction with Apple already giving people ‘trust scores’ while Conservatives in various areas across America are treated as 2nd class citizens while being completely censored by social media websites such as twitter, facebook and youtube.