In a very important recent story over at the Daily Mail that has been totally censored by the mainstream media, they report that according to President Trump’s Housing Secretary Ben Carson, a long-running socialist plot to take over America has been behind the recent Brett Kavanaugh sexual assault allegations.

While the mainstream media and big tech will do everything in their power to stifle Carson’s claims, quite literally calling anyone who believes them a ‘tinfoil-hat-wearing conspiracy theorist‘, a closer look at Carson’s warnings finds not only a shadowy conspiracy that has existed in America for over 100 years, but brings us straight to a cryptic warning recently given by Julian Assange of Wikileaks who eerily stated in his last pre-blackout interview: “This is the last free generation“.

And while Assange warned of the technological prisons that have been constructed all around us in this age of never-ending surveillance cameras capturing the every move of Americans both out in the world while google and big tech’s A.I. captures and records everything going on online, Assange adds in quite the understatement: “It smells a bit like totalitarianism – in some way.” You can see Assange’s entire last interview before his information blackout began in the first video below from Real.Video. 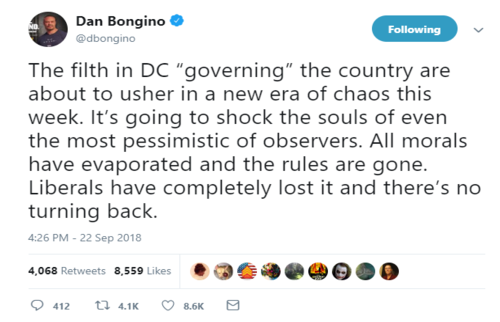 And with America now in what promises to be one of the biggest political weeks in this country since the 2016 election with a seat on the US Supreme Court hanging in the balance and a huge revelation awaiting America with the forthcoming declassification of the FISA court documents and the firing/resignation of Assistant US Attorney General Rod Rosenstein further dividing Americans, former US Secret Service Agent Dan Bongino recently warned the American people on twitter to hold on to our hats as the corrupt left are preparing to usher in an entirely new era of chaos and crazy this week.

Warning that the extreme left will surely sink to entirely new low levels of depravity with Kavanaugh potentially being voted into the Supreme Court by the end of the week, the fact that Dianne Feinstein and the left have gone to the extent of attempting to give credibility to a rumor of something that may or may not have happened 36 years ago to destroy a good man and to further enrage the left shows us just how desperate they now are to stop Kavanaugh, and they’ll resort to the dirtiest tricks to do so.

With Bongino warning in his series of tweets that it’s about to get very ugly in DC and on Capitol Hill, with protestors likely becoming more and more unhinged as the week moves on and closer to a vote, and violent and aggressive ‘protests’ being quite possible, this could be a make or break week for both political parties. With a block of Kavanaugh’s nomination surely to send the left into shrieks of uncontrollable madness and soy-induced glee ahead of the mid-terms while a Kavanaugh confirmation would surely complete the left’s detatchment from reality as Bongino warns as they complete their meltdown into madness. 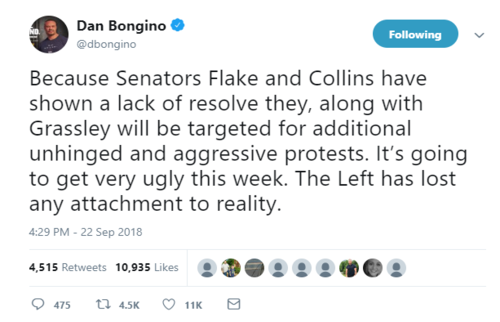 While we’ve long believed when it comes to rumored forthcoming indictments and arrests of corrupt deep state officials that “we’ll believe it when we see it“, in this new story from Mike Adams over at Natural News and the 2nd and final video below from Adams at Counterthink, he argues that already signed Executive Orders indicate that President Trump is planning mass arrests and military tribunals for deep state traitors such as James Comey, Hillary Clinton and Barack Obama.

And while we still say “we’ll believe it when we see it” and not until then, and we certainly won’t be holding our breaths waiting for it to happen, should such mass arrests happen it would be easy to understand why that would be the straw that broke the camel’s back, sending the already enrage left into full-scale meltdown’s all across the country, with the potential of extreme violence, perhaps even leading to martial law being declared ahead of civil war.

And while we’d love to see such mass arrests of the traitors who sold out America for some kind of totalitarian, luciferian ‘new world order’, and Americans are clearly overdue seeing justice served, we should also be paying very close attention to the manipulated breakdown of the masses on the left, pushing for mob rule, as if Hillary and the Congressional leaders on the left are some kind of ‘pied piper’, playing a tune driving the left over the cliff of insanity. All eyes and ears open moving forward.