End This Freak Show Right Now – Fourth And Final ‘Witness’ And ‘Longtime Friend’ Of Kavanaugh Accuser, Denies Attending Party Where She Claims She Was Attacked

End This Freak Show Right Now – Fourth And Final ‘Witness’ And ‘Longtime Friend’ Of Kavanaugh Accuser, Denies Attending Party Where She Claims She Was Attacked By Susan Duclos – All News PipeLine

The fourth and final “witness” named by Christine Blasey Ford that supposedly attended the get together 35 or 36 years ago, where Ford claims that Supreme Court nominee Judge Brett Kavanaugh attempted to sexually assault her, has now issued a statement, through her lawyer, to the Senate Judiciary committee, denying attending a party where Kavanaugh was present.

“Simply put, Ms. Keyser does not know Mr. Kavanaugh and she has no recollection of ever being at a party or gathering where he was present, with, or without, Dr. Ford,” said Howard Walsh, who said he has been “engaged in the limited capacity” of corresponding with the committee on behalf of Keyser.

The woman, Leland Ingham Keyser, has been described as a “longtime friend,” of Ford, and the only other woman that Ford claims was at the party in question. Mark Judge, Patrick J. Smyth (PJ), and Brett Kavanaugh were also named by Ford, and all three of them have also denied knowledge of the party in question, with statements to the Senate Judiciary committee.

Smyth: “I am issuing this statement today to make it clear to all involved that I have no knowledge of the party in question; nor do I have any knowledge of the allegations of improper conduct she has leveled against Brett Kavanaugh.” Smyth added: “Personally speaking, I have known Brett Kavanaugh since high school and I know him to be a person of great integrity, a great friend, and I have never witnessed any improper conduct by Brett Kavanaugh towards women. To safeguard my own privacy and anonymity, I respectfully request that the Committee accept this statement in response to any inquiry the Committee may have.”

Judge: “I have no memory of this alleged incident. Brett Kavanaugh and I were friends in high school but I do not recall the party described in Dr. Ford’s letter. More to the point, I never saw Brett act in the manner Dr. Ford describes.” In a follow up statement given to the Weekly Standard, Judge called the accusation “Absolutely nuts.”

Kavanaugh has consistently maintained that he never attempted to assault Ford, or any woman, and immediately volunteered to testify in front of the Judiciary committee in order to clear his name.

As Charles Cooke over at NRO points out, “Under 18 U.S.C § 1001, letters to the Judiciary Committee are subject to criminal penalty if false.” 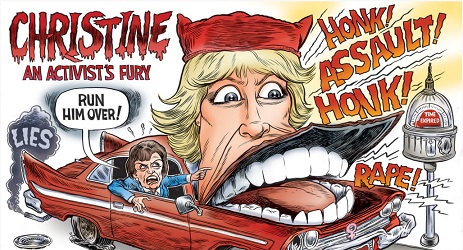 WHAT IS THERE TO INVESTIGATE?

I see liberal hashtags in support of Ford, Hollywood celebrities claiming they “believe” her, despite her admitting she doesn’t remember how she got to the party, how she got home, where the party was held or even what year the incident occurred. Some of the same people that claim to “believe” her, have never met her and insist there be an “investigation,” into her allegations, and most have been very vocal in their opposition to Kavanaugh being confirmed to the Supreme Court.

Okay, lets run with that “investigation.”

The first thing any investigator would do is get the details of the alleged incident, where it happened, when it happened and who was present.

According to the only account by Ford, at the Washington Post the “when” is described as “one summer in the early 1980s,”  and the “where” was “at a house in Montgomery County.” Later in the article, it states that Ford does not remember some key details, and believes the alleged incident occurred “in the summer of 1982.” The article also states “She also doesn’t recall who owned the house or how she got there.”

Then there are the discrepancies in the original Wapo article:

Ford said she told no one of the incident in any detail until 2012, when she was in couples therapy with her husband. The therapist’s notes, portions of which were provided by Ford and reviewed by The Washington Post, do not mention Kavanaugh’s name but say she reported that she was attacked by students “from an elitist boys’ school” who went on to become “highly respected and high-ranking members of society in Washington.” The notes say four boys were involved, a discrepancy Ford says was an error on the therapist’s part. Ford said there were four boys at the party but only two in the room.

Ford claims the therapists notes were incorrect in stating that four boys were involved, but then maintains that there were “four boys at the party,” yet now we find out that she only named three, Kavanaugh, Judge and Smyth and other person she claims attended the party was her “longtime friend,” Leland Ingham Keyser.’