What The Heck Are They Hiding From The Local Law Enforcement And The Public?

Following up on mysterious and sudden evacuation of the Sunspot Solar Observatory on September 6, 2018, which left the public, and local law enforcement in the dark after the FBI rushed in and forced employees and residents to evacuate the site, leaving the sprawling facility as nothing more than a ghost town for 11 days.

Brief Recap: Below are a few quick key points over the original mysterious evacuation for those that did not see ANP’s previous article:

• The facility is owned by Association of Universities for Research in Astronomy (AURA). AURA is not a federal or government group, it is a consortium, a corporation.

• On September 6, 2018 the FBI showed up in force, ordering employees and residents that live on-site to evacuate. The U.S. Post Office for the area was also told to vacate their facility.

• Local law enforcement was brought in, without being told what was going on, to “standby” while residents and employees were forced to leave. Otero County Sheriff, Benny House, who is responsible for the safety and security of those residents and employees, stated at the time “The FBI is refusing to tell us what’s going on. We’ve got people up there (at Sunspot) that requested us to standby while they evacuate it. Nobody would really elaborate on any of the circumstances as to why. The FBI were up there. What their purpose was nobody will say. But for the FBI to get involved that quick and be so secretive about it, there was a lot of stuff going on up there. There was a Blackhawk helicopter, a bunch of people around antennas and work crews on towers but nobody would tell us anything.”

• A week later an internet videographer casually bypassed the yellow tape at the entrance and the stop sign and provided video footage of the area as he walked through. There were no guards posted, no security personnel and the whole facility, which includes laboratories, a gas station, a laundromat, and residential homes, was like a “ghost town.” (That footage can be seen here) 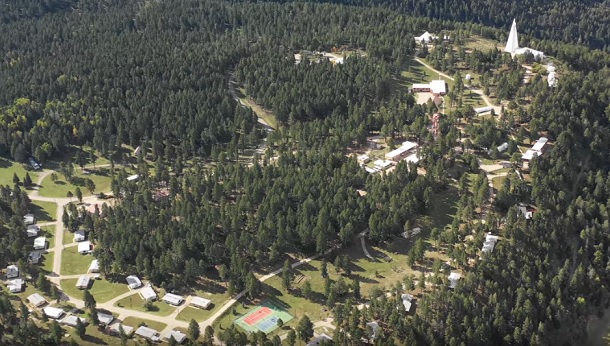 THE ‘OFFICIAL’ STATEMENT INTENSIFIES THE MYSTERY OF THE EVACUATION AND CLOSURE

In the absence of any transparency from AURA or the FBI, internet speculation ranged from alien invasion to espionage, but once the “official” statement from AURA was released, supposedly explaining the evacuation and closure, the mystery intensified.

According to AURA the site was evacuated “as a precautionary measure while addressing a security issue.”  AURA then claimed they had been “cooperating with an on-going law enforcement investigation of criminal activity that occurred at Sacramento Peak.” AURA claims they “became concerned that a suspect in the investigation potentially posed a threat to the safety of local staff and residents.”

Note: Sheriff House was not informed of any security threat, nor criminal activity,  nor is aware of any “suspect,” all of which would have fallen under his purview since the FBI investigates federal crimes and national security issues.

More from AURA’s statement below:

The decision to vacate was based on the logistical challenges associated with protecting personnel at such a remote location, and the need for expeditious response to the potential threat. AURA determined that moving the small number of on-site staff and residents off the mountain was the most prudent and effective action to ensure their safety.

In light of recent developments in the investigation, we have determined there is no risk to staff, and Sunspot Solar Observatory is transitioning back to regular operations as of September 17th. Given the significant amount of publicity the temporary closure has generated, and the consequent expectation of an unusual number of visitors to the site, we are temporarily engaging a security service while the facility returns to a normal working environment.

We recognize that the lack of communications while the facility was vacated was concerning and frustrating for some. However, our desire to provide additional information had to be balanced against the risk that, if spread at the time, the news would alert the suspect and impede the law enforcement investigation. That was a risk we could not take.

So, let’s break this down because AURA’s statement is full of inconsistencies, and frankly brings up more questions than it answers.

1) According to AURA, they couldn’t adequately protect their personnel or residents at “such a remote location,” yet the Sheriff and his department, which would have been responsible for protecting said personnel and residents, were never informed and were not consulted, so how could AURA even begin to determine whether adequate protection could be provided without any input from local law enforcement?

2) AURA claims it was the most “prudent and effective action,” to force residents from their homes and off the mountain, and to ceaseall science activities at the location, rather than just call the Sheriff and have his department provide protection to said residents and employees? That doesn’t even pass the smell test.

3) They claim that informing residents, employees, and the community at large would “alert the suspect,” and they couldn’t take that risk,” as if the FBI converging on the facility, evacuating it and the local Post Office, with a Black Hawk helicopter flying around above, and “a bunch of people around antennas and work crews on towers,” wouldn’t “alert the suspect?”

We at ANP, along with others across the internet discussing this, are not the only people thinking AURA’s statement is utter nonsense, as Sheriff House, when informed of AURA’s statement and assertions, is infuriated, and publicly, on-air, called the FBI’s handling of this situation “chicken sh*t.”