Groups Are ‘Pulling Out All The Stops’ To Manipulate Midterm Elections

There is an old idiom “pull out all the stops,” which references the use of all the resources or force at one’s disposal in order do everything they possibly can to make something happen in the way that they want it to, and a look at some of the news we are seeing this past week, shows us that the media, big tech and liberals (Yes, I know they are all the same thing) are doing exactly that ahead of the midterm elections in order to manipulate the outcome.

THE DAMN IS BREAKING

A number of seemingly unrelated events are occurring simultaneously which when one takes a step back and looks at them all as a whole, rather than separate occurrences, indicates something huge is coming as we near the midterm elections.

On Wednesday we detailed the flurry of recent attacks against conservatives, online and off, including, but not limited to; The attempted murder of a GOP candidate in California, and;  Rape and death threats against a female conservative writer, forcing her to hide out in her own home. (Read more on that in the ANP article here)

Since that article, we have noted another strange form of protest by an unhinged, deranged Las Vegas, liberal professor who thought that shooting himself on school property was a good way to protest President Trump.

Big Tech Censors #WalkAway Founder: As many know by now there is a new movement that has become huge after a gay hairdresser from New York, Brandon Straka, created a viral video explaining why, after voting for Barack Obama, twice, he walked away from the Democratic party. Thousands started using the #WalkAway hashtag on Twitter to tell their stories of when they too felt the need to #WalkAway from the Democratic and why.

The media then went into full damage-control mode and started claiming that “Russian bots” were behind the #WalkAway campaignand hashtag.

Then Americans started using video to explain that 1) They are not Russian bots, and; 2) Why they needed to #WalkAway. Powerful testimonials, citing liberal media bias, the violence being perpetrated by the left against MAGA supporters and conservatives, lies they had been told and only discovered them after they started to research on their own and stopped trusting the liberal establishment media.

The movement exploded online and offline and the founder, Brandon Straka decided to organize a #WalkAway March for October, and has been working towards that goal for weeks.

Now big tech has stepped in to prevent Mr. Straka from promoting his rally, with Facebook banning him from promoting his event and his interviews, because he dared promote his own interview with Alex Jones. (Facebook and over a dozen others colluded to block Alex Jones on their platforms, all on the same day in August in one of the most blatant acts of censorship against an entity ever)

Straka said the suspension comes ahead of his planned march on Washington, D.C. and cuts him off from over 180,000 members of his #WalkAway campaign (the #WalkAway Facebook group has just over 76,000 likes).

“I’m devastated right now. WalkAway Campaign is a grassroots movement. We don’t have corporate sponsors. We don’t have backers. We are raising the money and the awareness for our event ourselves. We use GoFundMe to raise money. And today Facebook took away my ability to communicate with the 180,000 members of the campaign leading up to the March,” Straka told right-wing outlet the Gateway Pundit.

“This is going to smash my ability to provide information, answer questions, raise money, and rally with my people,” he continued. 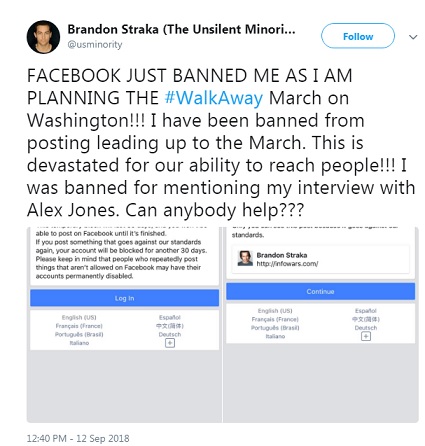 Note: One does not have to agree with Alex Jones to be disturbed by the coordinated censorship and the deliberate attempts to limit his online visibility, because big tech disagrees with his messaging and his opinion. The banning of Straka for nothing more than promoting his own interview regarding his #WalkAway movement is even more blatant as big tech attempts to prevent more Democrats from awakening to his message and perhaps deciding to #WalkAway themselves.