“A variety of investors provided capital to financial companies, with which they made irresponsible loans and took excessive risks. These activities resulted in real losses, which have largely wiped out the shareholder equity of the companies. But behind that shareholder equity is bondholder money, and so much of it that neither depositors of the institution nor the public ever need to take a penny of losses. Citigroup, for example, has $2 trillion in assets, but also has $600 billion owed to its own bondholders. From an ethical perspective, the lenders who took the risk to finance the activities of these companies are the ones that should directly bear the cost of the losses.”– John Hussman – May 2009 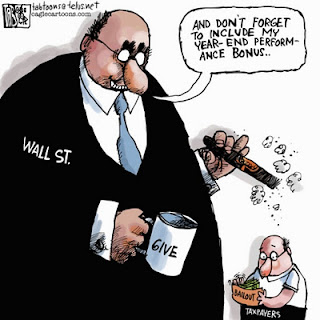 This month marks the 10th anniversary of the Wall Street/Fed/Treasury created financial disaster of 2008/2009. What should have happened was an orderly liquidation of the criminal Wall Street banks who committed the greatest control fraud in world history and the disposition of their good assets to non-criminal banks who did not recklessly leverage their assets by 30 to 1, while fraudulently issuing worthless loans to deadbeats and criminals. But we know that did not happen.

You, the taxpayer, bailed the criminal bankers out and have been screwed for the last decade with negative real interest rates and stagnant real wages, while the Wall Street scum have raked in risk free billions in profits provided by their captured puppets at the Federal Reserve. The criminal CEOs and their executive teams of henchmen have rewarded themselves with billions in bonuses while risk averse grandmas “earn” .10% on their money market accounts while acquiring a taste for Fancy Feast savory salmon cat food.

I find the cognitive dissonance and normalcy bias regarding what has actually happened over the last ten years to be at astounding levels. As someone who views the world based upon a factual assessment of financial, economic and global data, I’m flabbergasted at the willful ignorance of the populace and the ease with which the ruling class has used their propaganda machine to convince people our current situation is normal, improving, and eternally sustainable.

When confronted by unequivocal facts, historically accurate comparisons, and proof our economic system is unsustainable and headed for a crash, the average person somehow is able to ignore the facts and believe all will be well because some “experts” in the propaganda media said not to worry. Those who present factual arguments are declared doomers or conspiracy theorists. They are scorned and ridiculed for being wrong for the last ten years.

The vast majority of math challenged citizens in this country don’t understand the concepts of real interest rates, real wages, debt to GDP, deficits, national debt, or unfunded liabilities. As long as their credit cards are accepted and they can get that pack of smokes with their debit card, all is well with the world. They’ve been convinced by the propagandist corporate media machine that acquiring stuff on credit makes them wealthier. They think their wages are increasing when they get a 2.5% raise, when they are falling further behind because true inflation exceeds 5%.

Their normalcy bias keeps them from grasping why their credit card balance rises even though they have slightly higher pay. They actually believe bloviating politicians when they declare we have the best jobs market in history. Suddenly, formerly skeptical conservatives who rightly believed the government drones at the BLS and BEA cooked the books to make the economy appear better than it really is, believe Trump’s declarations based on the same data. Root, root, root for your home team. Why let facts get in the way of a good story?

“The President says this is the best economy in “15 years”. Kudlow says we’re in a “boom”. But in the first 18 months of the Trump presidency, private nonfarm payrolls averaged 190k, the same rate of job creation in the last 18 months of the Obama tenure.” – David Rosenberg

The unemployment rate was falling during Obama’s entire presidency and has continued to fall under Trump. It’s the same story. In order to keep up with the demographic growth of the labor market we need to generate 200k new jobs per month. But even though we’ve added less than 200k per month for the last three years, the unemployment rate has fallen because the BLS drones say a few million more working age stiffs have willingly left the labor force, bringing that total to just below 96 million people with their feet up on the couch watching The View.

They must be living off their non-existent savings and accumulated wealth. The cognitive dissonant masses, who believe the BS peddled by CNBC, etc., don’t seem to question why their real wage increases have ranged between 0% and 1% since the Trump reign began (it was 2% during Obama’s last two years). Real wages couldn’t be falling if the unemployment rate was really 3.9%. But, why spoil a good narrative with inconvenient truth.

With stagnant real wages since the Wall Street created financial crisis, a critical thinking person might wonder how an economy whose GDP is 70% dependent on consumer spending could grow for the last nine years, with corporate profits at all-time highs, consumer confidence at record highs, and the stock market at record highs. The Deep State/Ruling Class/Powers That Be or whatever you want to call the real people pulling the strings behind the curtain boldly assumed their propaganda machine and the years of dumbing down the populace through their public education system could convince the American public to utilize cheap plentiful debt to re-inflate a new bubble to replace their last criminal enterprise.