The Pentagon Has Confirmed: Man Can Now ‘Play God’ With The Weather

The Pentagon Has Confirmed: Man Can Now ‘Play God’ With The Weather By Stefan Stanford – All News Pipeline

TDC Note – And we all know how well it works out when we, the humans, begin proclaiming we can “play God”. Yeah, that always works out great!

With this new story from the Weather Channel reporting that the hurricane season in the Atlantic Ocean may be heating up with a tropical depression heading towards the Gulf of Mexico that is expected to spread a huge amount of rain coming at a time when news stories across America warn of an unbearably cold winter bearing down upon us, we thought we’d take a look at prepping for disastrous weather at a time when the Pentagon has finally admitted that government’s are using powerful energy beams to control the weather.

While weather modification programs have long been called ‘conspiracy theory’ and those speaking of such  urged to wear tinfoil hats, Steve Quayle had warned the world years ago in his book “Weather Wars & Un-Natural Disasters” that technologies that had secretly emerged would allow the leaders of major nations to control the weather and conduct secret weather warfare that could be used to produce lengthy periods of drought or disastrous storms. So if man has the technology, why wouldn’t they attempt to ‘play God?’

As the South China Morning Post recently reported, we have proof that China is building a powerful radar system in the South China Sea that could: knock out communication systems, manipulate the weatherand even cause natural disasters. And now this from their very important story.:

The system, which sounds like something out of science fiction, uses pulsed energy beams to study and manipulate electrically charged particles in the high atmosphere. It has civilian and military applications and could challenge US dominance in both spheres.

The US military has already been working on similar technology, but it has proved controversial with critics warning that it could allow governments to play God by causing disasters such as hurricanes, typhoons and tsunami.

Still think that weather modification programs and man attempting to play God is a ‘conspiracy theory’? While their story also reports that many scientists still claim that such programs are impossible, all one needs to do is look at the US Air Force written all the way back in 1996 titled “Weather As A Force Multiplier: Owning The Weather In 2025” to understand they’ve long been on their way to doing so for a very long time now and an extensive list of weather modification patents can also be found on the website of Dane Wigington.

Well whether man-made weather or God-created weather in the months ahead, ANP reader Linda Smith recently made an excellent comment about the warnings now coming out from the mainstream media of an extremely cold winter ahead. Linda’s comment: “NEWS PIECES ARE NOW WARNING US OF A “NIGHTMARE” WINTER AHEAD…just a thought, but thinking like “they” do, might they intend to take the grid down during the season to freeze us out and stall normal living?”

Might they take down the grid to freeze out Americans as Linda warns with a bitterly cold winter ahead? Certainly anybody without the ability to heat their own homes should the grid go down for an extended period of time during a brutally cold winter could nearly instantly become a ‘statistic’.

With the years 2017 and 2018 bringing a countless and seemingly endless number of disasters to big cities and small towns all across America, and with these disasters not discriminating between rich or poor or white or black or Democrat or Republican showing that all Americans are indeed succeptible to such tragedies, President Donald Trump has just issued a Presidential Proclamation on August 31st declaring September to be National Preparedness Month. 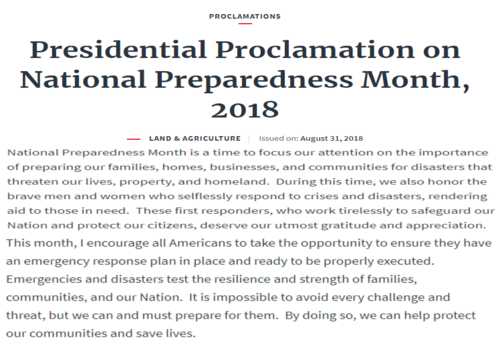 Reporting within his proclamation that national preparedness month is the time to focus upon the importance of preparing our families, homes, businesses and communities for potential disasters that not only threaten our property but our lives, President Trump’s proclamation also reminds us to honor those 1st responders who consistently put their own lives on the line in such times of danger and trouble to save others, people they don’t even know. ANP humbly thanks all 1st responders for your service to America!