#BuildTheWallNOW: How Many More American Dreamers Must Lose Their Lives?

#BuildTheWallNOW: How Many More American Dreamers Must Lose Their Lives? by Rory – The Daily Coin

Editor’s Note – There is an autoplay video that I feel is an important part of this overall story. The code is setup in a way that will not allow me to turnoff the autoplay. I’m sorry about that but I feel this is too important to not include. Thank you for your understanding.

It seems like the Democrats have crossed a line and may not be able to recover. 2020 Presidential Candidate, Democrat, Elizabeth Warren, drove home the point of open borders upon the announcement of charges being brought against the illegal immigrant killer of Mollie Tibbetts.

How anyone could support what this woman, a supposed American, says is beyond me. Black, white, red or blue it should not matter, Mollie is now permanently separated from her mother and father, while Elizabeth Warren believes in her heart that illegal immigrants, murderers or not, have the right to come to this country for any reason at any time they choose and we, the tax paying citizens, are suppose to fund their arrival, house them, educate them and provide them with health care while we, the tax paying, law abiding citizens are told to sit down, shut up and pay up.

While the scum at MSNBC may see this beautiful young lady as “a girl in Iowa” she is in fact named Mollie Tibbetts and had a family and her whole life in front of her.

MSNBC panelist Christina Greer disgracefully refers to Mollie Tibbetts, the 20-year-old murdered by an illegal alien, as “a girl in Iowa.” pic.twitter.com/8JnD9nZBmP

You can hear the pain and suffering in the voice of Mary Mendoza as she explains the impact of being permanently separated from her husband by a drunk driving, illegal immigrant.

The democrats have no standards, have no morals and are exposing themselves as the power hungry, bought and paid for puppets that they are. If you don’t believe me simply review the two articles we recently penned exposing their hypocrisy at the highest level – click here and click here

As JD Heyes, Natural News explained it from his perspective the democrats “don’t care about you, your family or your children” and that about sums up it.

The Democratic Party doesn’t care what happens to you, your family, or your children if any of you get in the way of their political objectives and attempts to retake power. If you do, well, then you’re just casualties of the movement.

That’s the only message you can glean from top a Democrat who has responded with criminal indifference to the news that an illegal alien allegedly confessed to murdering 20-year-old University of Iowa student Mollie Tibbetts, “blacking out,” then dumping her body in a cornfield three miles away from where he’s been working – illegally– for years.

Sen. Elizabeth “Fauxcohontas” Warren, D-Mass., a much-talked-about potential candidate for president in 2020, demonstrated that political objectives for her far-Left party take precedence of having a soul and anything critical of anyone in our country illegally Tuesday evening when she dodged a question about the crime on fake news central CNN.

When asked about the Tibbetts murder, she appallingly said that the country should be focusing on “real problems” – like separating illegal alien adults from children.

I’m not sure the democrats can overcome this situation this close to the midterm elections. The damage, which is substantial, will be on the minds of people all across the nation as they are reminded of the economy and long forget any of the nonsensical “witch hunt” we have been plagued with for the past two years. 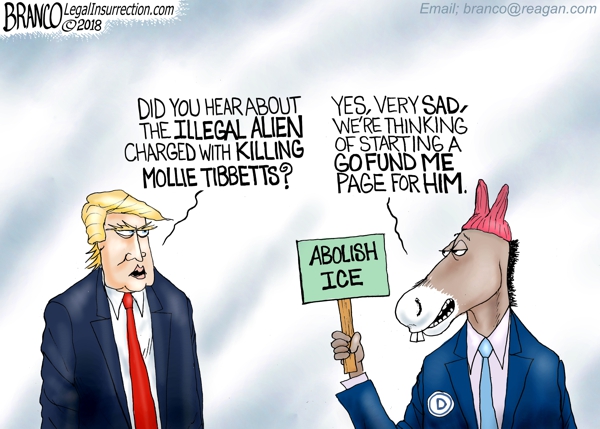 Kate Steinle, Sgt. Brandon Mendoza and Mollie Tibbets were all dreamers. They were full of life and now they are all, along with a great many others, permanently separated from their families with no opportunity to see them again on this plain. The democrats cried and cried and cried about the illegal immigrants being separated from their family and only offer solutions for the illegal immigrants as they step over the graves of American dreamers. #BuildTheWallNOW.