Social Media Censorship Targeted By President Trump, Calls It ‘Very Dangerous’ As He Puts Twitter And Facebook In The Crosshairs

Social Media Censorship Targeted By President Trump, Calls It ‘Very Dangerous’ As He Puts Twitter And Facebook In The Crosshairs By Susan Duclos – All News PipeLine

Since the 2016 presidential election conservatives across the board have noticed the censorship practices implemented by big tech and social media giants like Twitter and Facebook. Liberal news outlets claim it is a “conspiracy theory,” claiming the accusations are simply untrue, but charts, graphs and drastic revenue drops, prove the validity of those claims.

Now President Trump has not only addressed the issue in-depth using his favorite method of speaking directly to his supporters, via Twitter, but in an exclusive interview Reuters, he makes it clear that now those same platforms are in his crosshairs.

CENSORSHIP OF INDEPENDENT MEDIA IS PROVEN

Knowing that the President’s son, Donald Trump Jr. had highlighted multiple examples of Twitter censorship as far back as 2017, it is clear that would have been mentioned to his father, but the issue came to a head after it was revealed by the left-leaning website VICE reported that prominent Republicans, such as “Republican Party chair Ronna McDaniel, several conservative Republican congressmen, and Donald Trump Jr.’s spokesman no longer appear in the auto-populated drop-down search box on Twitter.”

Others that failed to appear on the auto-populated drop down search feature were Rep. Matt Gaetz, Rep. Jim Jordan, and Rep. Mark Meadows, all Republicans. According to The Hill, Gaetz’s Twitter analytics showed a significant drop in impressions and new followers, despite an increase in retweets.

VICE also found that prominent Democrats “not being ‘shadow banned’ in the same way.”

After they were busted they immediately “fixed” the problem, claiming it was not done on purpose.

President Trump weighed in the very next day, telling his followers “Twitter “SHADOW BANNING” prominent Republicans. Not good. We will look into this discriminatory and illegal practice at once! Many complaints.”

Twitter claims they do not “shadow ban,” but as Project Veritas found even before the VICE story was published, engineers and other employees of Twitter, admitted the company does shadow ban by teaching their algorithms to label the way someone “talks,” the words they used, such as God, guns, or America First, as trolls or bots.

Read some of their direct quotes at Project Veritas.

That backfired in a big way as traffic to Alex Jones website spiked, as did requests for his apps and products, as highlighted in a piece by Stefan Stanford just days later.

As the tech companies and social media platforms did this, with the majority all occurring within a 12-24 hour, period, the collusion was clear to see, despite those willing to comment on the manner claiming they each came to their decisions independently….. all at the same time.

The attempt to silence an Independent Media site backfired in another way, it brought the issue back, front and center, to President Trump’s attention. Trump apparently has been looking into options, because he was finally prepared to step into the fray.

August 18, 2018, the president sent out a series of messages to his Twitter followers, all referencing the discrimination by social media against Republicans and conservatives.

His first tweet stated “Social Media is totally discriminating against Republican/Conservative voices. Speaking loudly and clearly for the Trump Administration, we won’t let that happen. They are closing down the opinions of many people on the RIGHT, while at the same time doing nothing to others…….”

Just nine minutes later President Trump continued, “…..Censorship is a very dangerous thing & absolutely impossible to police. If you are weeding out Fake News, there is nothing so Fake as CNN & MSNBC, & yet I do not ask that their sick behavior be removed. I get used to it and watch with a grain of salt, or don’t watch at all..”

Eight minutes later, he concluded by stating “….Too many voices are being destroyed, some good & some bad, and that cannot be allowed to happen. Who is making the choices, because I can already tell you that too many mistakes are being made. Let everybody participate, good & bad, and we will all just have to figure it out!” 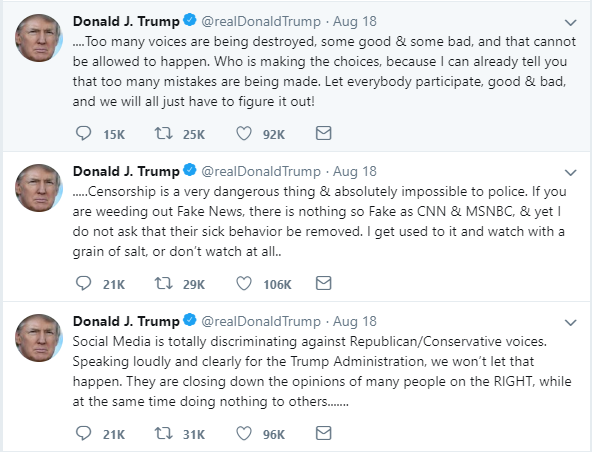 By Monday, August 20, 2018, it became clear that the plight of Independent Media websites that have been censored, blocked, shadow banned, downranked by Google, demonetized by YouTube, etc…. the very sites that collectively helped President Trump win the election in 2016, was still on his mind as he gave an exclusive interview to Reuters.