TDC Note – I wonder why we, internet only news outlets, are crushing corporate media? I just don’t understand.

Last month, an article by Fair.org went viral in republications by popular alternative media outlets ranging from Salon to Zero Hedge to Alternet to Truthdig, among many others. The article was initially titled “ACTION ALERT: It’s Been Over a Year Since MSNBC Has Mentioned US War in Yemen”, but many subsequent republications went with variations on the more attention-grabbing headline, “MSNBC has done 455 Stormy Daniels segments in the last year — but none on U.S. war in Yemen”.

The centerpiece of the article was the following graphic, which I saw shared on its own many times in my social media feeds: 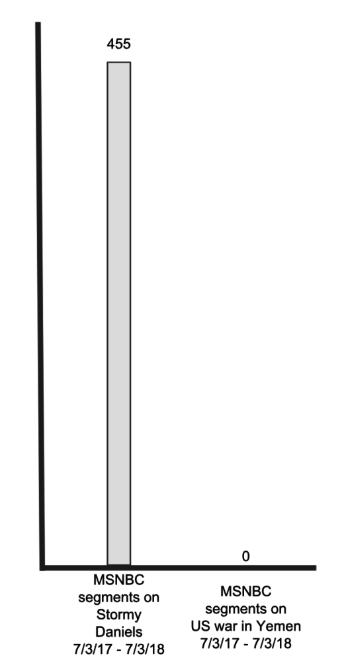 That’s about as in your face as it gets, isn’t it?

Ever since the Saudi-led assault on Yemen began in March of 2015, alternative media outlets everywhere have been repeatedly and aggressively decrying the mainstream media in the US and UK for their spectacular failure to adequately and accurately cover the violence and humanitarian disaster with appropriate reporting on who is responsible for it. After the 2016 US election, journalist Michael Tracey wrote an essay documenting how throughout the entire year and a half that Americans were pummeled with updates from the mass media about candidates and their campaigns, not one single question about Yemen was ever asked by any mainstream outlet of any candidate.

This is of course outrageous, but because of how media coverage works, mainstream attention was never drawn to the problem. It hasn’t been a total media blackout, but because it only turns up in mainstream media reports every once in a while with little if any emphasis being placed on who is behind the devastation, it occupies a very peripheral place in western consciousness. The average American would probably be able to tell you that some parts of their government appear to be concerned about Russia, Syria, Iran and North Korea, because those rival nations have been the subject of intense mass media coverage, but if you asked them about Yemen you’d likely be told something like “I think there’s some kind of humanitarian crisis there?”, if anything.

This has all changed in the last few days. Suddenly, the atrocities being inflicted upon the people of Yemen are being pushed into mainstream attention by the mass media outlets which have been ignoring them for more than three years. The Washington Post editorial board published an op-ed titled “End U.S. support for this misbegotten and unwinnable war”. CNN did some actual, real journalism for a change with a viral exclusive documenting which American war profiteers were behind some of the more devastating Saudi bombings. And yes, MSNBC finally did cover the violence in Yemen, breaking its year-long silence to report on a US-supplied bomb which killed 40 children with such urgent condemnation of those responsible you’d never know they’d been consistently ignoring such incidents which have been going on for years. Now politicians and celebrities everywhere are shoving the horror of their government facilitating the slaughter of innocents into mainstream attention.