A Smorgasbord Of New Stories From Across America Prove: There’s A Whole Lot Of Crazy Going On

A Smorgasbord Of New Stories From Across America Prove: There’s A Whole Lot Of Crazy Going On By Susan Duclos – All News PipeLine

From Hollywood to Washington DC, to grocery store “racism” to the maniacal media pundits, to a potential Chelsea Clinton presidential run, we are seeing a whole lot of crazy in the last week alone, leading me to wonder if “crazy” is now a contagious disease, or maybe we really are living in the Twilight Zone.

What got me thinking about this piece was seeing a Fox News article titled “Summertime and the media are embarrassing — from hating America to loving Antifa,” where the writer Dan Gainor, highlights a number of events that occurred in the space of a one week time frame, which included examples like New York governor  Andrew Cuomo declaring that America “was never that great,” to his brother, a CNN reporter Chris Cuomo publicly defending Antifa violence, and more…

In the space of one week, the press downplayed a Democrat governor saying America “was never that great” and watched as the governor’s brother/CNN anchor defended Antifa. Another CNN commentator bashed America and mocked a conservative while she told of the discrimination her disabled son faced. And former CIA director John Brennan, now an NBC national security analyst, recanted his claim that President Donald Trump committed treason and spent the week whining about losing his security clearance.

The article also dealt with the media’s fascination with Omarosa Manigault Newman, and the little Democratic socialist, Alexandria Ocasio-Cortez,  that the DNC chairman has called the “future of our party,” banning the press from a “public” event.

It is a good piece, but having come across it after a morning of browsing news and views from all over the internet, we see there is a whole lot more crazy going on.

I am beginning to think that to be part of Hollywood, without being penalized, they have to pass some type of “am I crazy & sick enough” test.

We now see that one of the leaders of the national #MeToo movement, where women starting calling out sexual misconduct against the men of Hollywood, then journalism, then tech companies, ending careers whether the women had proof or not, “secretly paid off a young male actor accusing her of sexual misconduct.”

What is really whacked about this is Asia Argento was one of the first and most vocal voices to accuse movie mogul film producer Harvey Weinstein of sexual assault.

According to a report in The New York Times, Argento paid former child actor Jimmy Bennett $380,000. Bennett claims that in 2013, a then 37-year-old Argento assaulted him in a California hotel only two months past his 17th birthday. The age of consent in California is 18.

According to Hollywood Reporter: “The legal documents outlining the accusations against Argento were sent not long after she went public with her own sexual assault allegations against Weinstein. ”

What makes this truly disturbing is that apparently Argento had known Bennett since he was a child, where he played the role of her son in 2004, when he was just 7 years old. Throughout the years they met up on occasion and referred to each other as mother and son on social media, according to a Daily Mail report.

‘Waiting for my long lost son my love @jimmymbennett in trepidation #marinadelrey smoking cigarettes like there was no next week,’ the Italian actress wrote on Instagram on May 9, 2013.

Then she invited him to her hotel, sent his chaperone away, gave him alcohol, read him her love letters before instigating sexual relations.

Moving along, other Hollywood names still think their opinions and activism should influence Americans, despite their coordinated efforts failing spectacularly in 2016 when they tried to get Hillary Clinton elected.

For example, Alyssa Milano, whose big claim to fame was her part in the TV series Charmed, has become a Second-Amendment hating gub grabbing resistance activist (who attends events with armed guards), and she is also protesting the nomination and likely confirmation of President Trump’s Supreme Court nominee, Brett Kavanaugh, by running around in a costume from the Handmaid’s Tale, then proudly tweeting out a picture of herself, using the hashtags #RiseUpForRoe #WeAreNotProperty #StopKavanaugh. 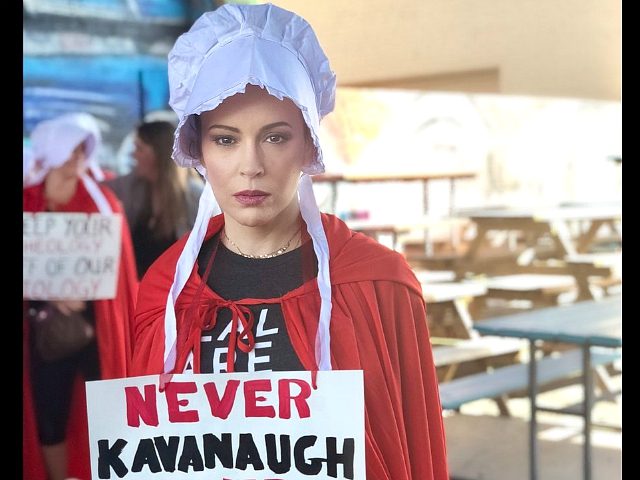 Of course conservative Twitter users had a little Meme fun by replacing the sign she is holding and posting their own images in response. Those can be found at Twitchy.