U.S. Treasury bond scheme perfect when the buyer can simply print money out of nothing to scoop them up, and does not care at all about profit

U.S. Treasury bond scheme perfect when the buyer can simply print money out of nothing to scoop them up, and does not care at all about profit by Ken Schortgen – Shotgun Economics

With Russia, Turkey, and now Japan all dumping their Treasuries (dollar reserves), one of the biggest questions haunting Wall Street is, who exactly are buying these bonds to help keep yields down?

We raise this query in light of discussions that are now occurring among analysts for not if China will start dumping their estimated $1.3 trillion worth of dollar reserves in an effort to both protect their currency, and to harm the U.S. in the ongoing trade war, but when. 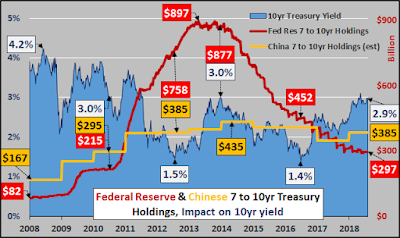 I often read that China may retaliate against US trade sanctions by further decreasing their US Treasury holdings, sending Treasury yields significantly higher, thus blowing out US deficit spending on interest payments.  Trouble is, Chinese Treasury holdings peaked in 2014 (on an annualized basis) and have been declining since.  The Chinese have not only ceased accumulating US Treasury debt, despite continued record trade surplus’ with the US resulting in significant dollar surplus’, but have been decreasing their holdings.  All this, according to the Treasury International Capital (TIC) system.

But this postulation that the Chinese could wound the US via selling a portion (or all) of its Treasury holdings (as Russia recently did) is submarined by the recent actions of the Federal Reserve.  I say this based on the magnitudes greater accumulation and subsequent dumping of specific maturities of US Treasury debt done by the Federal Reserve.

The Federal Reserve accumulated almost $800 billion in 7 to 10 year US Treasury debt (red line, chart below) from 2009 to 2013, and then subsequently dumped $600 billion from early 2014 through the most present August 2018 data.  And the impact on the 10 year yield (blue shaded area, chart below)…essentially zero.  Yes, while the Fed rolled off and/or sold off 7 to 10 year holdings, they were busy buying short term debt.  But this still meant someone had to step up in duration and buy all that longer duration debt the Fed no longer wanted. – Economica

Central banks across the board have been buying sovereign bonds going back to the original days of Quantitative Easing 1 (QE1), with the three most public entities being the Fed, the Bank of Japan, and of course, the ECB.  But with most of these institution’s balance sheets having skyrocketed at least 500% or more higher than they were at the time of the 2008 financial collapse, how exactly could they afford to buy more if nations holding these bonds began to sell them?

Perhaps this is one of the primary reasons why the Fed chose to remove its Live balance sheet accounting recently, which had been monitoring in real time their supposed ‘tightening’ of their balance sheet over the past year.  Because if they are telling the markets that they are doing one thing, and then behind the scenes doing something else, it would destroy investor sentiment in their ability to manage the system, and result in helping to accelerate market forces such as inflation and higher yields.

In short, Bernie Madoff would blush at the farce that is now the US Treasury market (further manipulating all downstream interest rate sensitive markets). A little lie or meddling led to more lying and more meddling…and suddenly the free market no longer exists. It should be clear that a buyer without profit motive is intervening in the Treasury market to maintain a bid and sustain continued low rates on US debt…all this because America has matured but those in control still want to synthetically maintain growth rates (hello China) via unrestrained debt issuance.