James Clapper was named the director of national Intelligence in 2010 by President Obama. The American people were told that Clapper understood the importance of working with Congress and to keep Congress informed.

The words of Obama have not been borne out. We now know of the perjury before Congress that Clapper performed. James Clapper lied to Congress about the metadata being assembled by the National Security Agency on American citizens. In the words of Senator Ron Wyden (D-OR) :

“One of the most important responsibilities a senator has is oversight of the intelligence communities and can not do this job if they do not get straight answers to direct questions.”

James Clapper failed this test. His response, when brought out in the open by Eric Snowden, was:

“I responded in what I thought was the most truthful, or least untruthful manner.”

And this was after Clapper was given the questions a day ahead of time. In collaboration with the media, Clapper has been shown to be a serial liar, perjurer, and leaker of classified information to reporters of CNN to the media to work towards the impeachment of President Trump. Clapper was the lead of pushing the leaks and false information forward to undermine the President of the United States. Clapper has been the primary force behind the collusion between the Deep State and a liberal infested media driven by an agenda of progressive socialism. 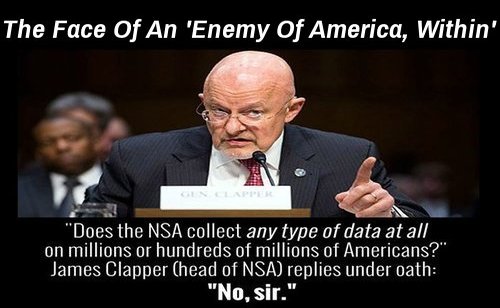 Based on foreign unverified sources, a fake dossier and anonymous sources that are basically made up to fit the agenda the Deep State in collusion with James Clapper looks to move one party’s agenda forward at the expense of the conservative agenda with lies and innuendo. It was Clapper that told Salon that significant portions of the dossier had been verified but neglected to say which parts or show the verification that he so richly espoused.

Even in May of 2018, when confronted on “The View” by Meghan McCain, Clapper once again lied and claimed he was thinking about another program. There were no limitations on Clapper when asked the original questions.

Clapper, when caught by Eric Snowden has been unremorseful about his lying. Going further, he was one of four Obama officials to attend the briefing of the President and in his official statements to the media claimed “profound dismay at the leaks” in January 2017 calling them “extremely corrosive and damaging” to national security while leaking all the information to Jake Tapper, once again in January 2017. It was the start of the allegations of collusion between the Trump campaign and Russia. Of course, Clapper adamantly denied these leaks at first to Congress until confronted with the facts and stated that he not only leaked to Tapper at CNN, but “may” have “discussed the leaks with other journalists.”

I find it interesting that the Briefing being given to Trump was performed because CNN has the story and needed a “news hook.” Clapper along with Comey was more than willing to give the dossier story the imprimatur of validity when the briefing was done and then leaked by them to the press. The media then had the excuse to move the story forward because our intelligence communities have given it the verification of validity that has since been proven false. Based on the unverified information, the media then proceeded to do their best to take Trump down. The entire briefing was a setup, scheduled by Comey and Clapper so it could be leaked.

Moving forward is the question of Clapper and a spy in the Trump campaign. Clapper claims it was “a good thing” because the spy was there to focus on substantiating the Russian influence in the election. In Clapper’s words:

“With the informant business, well, the point here is the Russians. Not spying on the campaign but what the Russians were doing”. 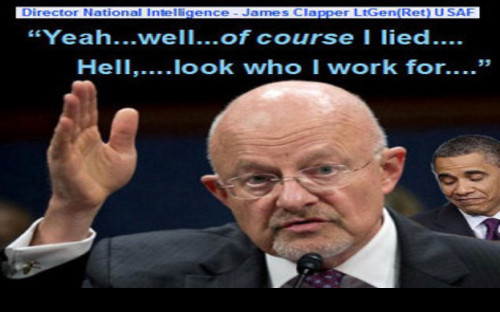 There is no question that the focus of the campaign spying was Trump. It was being used to find a way to delegitimize our duly elected President.

One question that needs to be answered is why this occurred in the Trump campaign but not Hillary’s. If it was a question of Russian interference, wouldn’t they have also placed on a spy in Hillary’s campaign? She was actually paying the Russians for the dossier but no one in all our intelligence noticed? No one knew what she had done, and the millions siphoned from the DNC to Fusion GPS and Christopher Steele?