When you think CNN cannot sink any lower than their performance in 2017, which has led them to land in 6th place, behind Fox News, Nickelodeon, MSNBC, Home and Garden Television, and Investigation Discovery, they manage in just one week to sink to their lowest levels of “fake news” and propaganda, ever.

We’ll start with CNN Politics Reporter and Editor-at-Large, Chris Cillizza, who shared a post from a fake account of Peter Strzok, the FBI agent that was recently terminated. The post Cillizza shared stated “I have been fired for expressing my personal opinion in private texts about a dictator that history will soon deem not only a Russian asset but an unhinged madman threatening the sovereignty of the United States of America.”

Not only did that fake Peter Strzok account make it clear it was fake by using the Twitter handle @notpeterstrzok, but it the profile for that account it is clearly marked as a “Parody account.”

In other words it would have taken Cillizza less than 2 seconds of research to determine this wasn’t Strzok’s real account. Not only did Cillizza not bother to do that before promoting a fake news tweet, but then admitted he had to be told it was a fake account tweet he shared like it was gospel. 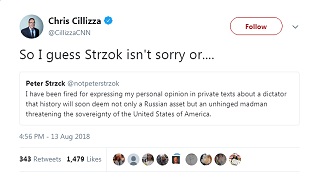 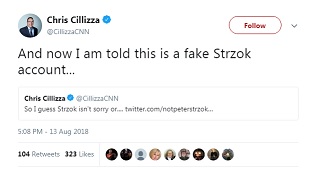 Notice in the first Cillizza tweet sharing the fake Strzok tweet calling President Trump a “dictator” and a “Russian asset,” Cillizza’s post was liked 1,479 times and retweeted 343 times, while his acknowledgement that it was a fake account that he tweeted was only liked 323 times and retweeted 104.

His fake news tweet received much more reach, aka exposure than his second one.

Speaking of Cillizza, I see he has an article out, titled “Donald Trump’s Omarosa obsession is telling,” (Archive.is link here) in where he seems to think it is shocking that “President Donald Trump sent seven — yes, seven! — tweets attacking his former aide Omarosa Manigault Newman.”

A search on CNN for “Omarosa,” brings up 60 articles about her in August alone, so if seven tweets is considered an “obsession” by Mr. Cillizza, what is 60 whole articles talking about her called?

A search of Cillizza’s timeline shows 22 mentions of Omarosa in just the last week, sometimes it was mentioned twice in one tweet or retweet.

CNN has no room to talk about obsession as they obsessed over a random internet user that generated a meme that President Trump shared, to the point where they hunted him down, then threatened him with exposing his private details if his future “behavior” online was bad. They have obsessed over strippers, Russian sex coaches and prostitutes and their Russia obsession became so bad at one point they even sent a “journalist” to Russia to dig through trash and did a whole segment about it!

Let us not forget harassing and doxing an elderly lady in her front yard for doing nothing more than sharing an event that was shared by some alleged Russian Facebook account. Never mind the event was real, or that those attending with her were Trump supporters as opposed to Russians, they accused her of helping Russia, which caused her to be targeted by liberals for abuse online and offline.

Another recent obsession of CNN personalities is Alex Jones, where they led the charge to harass big tech companies until they all terminated their association, banned Jones’ accounts, wiped out his YouTube channel, banned his Facebook pages, took his livestreams down. All within a 24 hour period, and they are still harassing those that work with Jones or Infowars.

None of those CNN personalities were as obsessed with Alex Jones and targeted harassment against anybody associated with him, than CNN’s senior reporter Oliver Darcy, who has tweeted about Alex Jones 21 times in an 8 day period. 16 individual tweets, and 5 more within some of those threads. He has also mentioned InfoWars over 20 times in August.

Cillizza doesn’t mention Darcy’s obsession with Alex Jones, or how “telling” it is, not even once.

InfoWars editor-at-large, Paul Joseph Watson, shared some private messages he sent to Oliver Darcy, calling him and CNN out on their harassment campaign, while ignoring Antifa violence (or excusing it, which we will get to below)  stating “My personal message to CNN’s Oliver Darcy, who is leading the crusade, on behalf of CNN, to have all offensive speech “banned”.