Media Spin Has Liberals Outraged Over Peter Strzok Being Fired

News broke on Monday that FBI agent, Peter Strzok, has finally been fired from the FBI, with the media carefully wording their headlines to imply it was simply because he sent anti-Trump text messages to his alleged lover, former FBI counsel Lisa Page, during the 2016 presidential campaign cycle and after the election.

Liberals on social media are already having a meltdown, claiming “Trump is abusing his power,” and that the FBI is “Caving to political pressure from Trump-enabling @GOP,” with another that lists herself as a “LifeLong PROGRESSIVE DEM,” dramatically declaring “I am feeling very rattled by Peter Strzok firing. One more successful brutal attack on a seasoned counter-intelligence, espionage expert. We are losing our checks on power one career professional at a time.”

On and on it goes, but I think you get the point, they are OUTRAGED because they think that Strzok was fired for merely having a political opinion and was “anti-Trump.”

I kid you not. 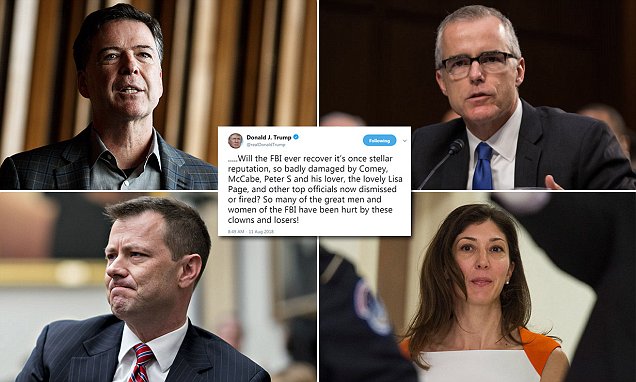 In the DOJ’s Inspector General Report from June 2018, which was a review of various actions by the FBI and the DOJ in advance of the 2016 election, Strzok was referenced throughout the report, for his bias against President Trump

Strzok played key roles in both the Hillary Clinton investigation into her use of a private server, and the initiation of the Russia probe, which he called an “insurance policy,” in the event that Donald Trump won the election. The IG cited multiple text messages between Strzok and Page, including one where Strzok told Page in August 2016 that “we’ll stop” Trump from being elected.

“[I]t is not only indicative of a biased state of mind but, even more seriously, implies a willingness to take official action to impact the presidential candidate’s electoral prospects,” the IG said. “Strzok’s decision to prioritize the Russia investigation over following up on the midyear-related investigative lead discovered on the [Anthony] Weiner laptop in October 2016, these text messages led us to conclude that we did not have confidence that Strzok’s decision was free from bias.”

The “midyear-related investigation,” referenced was the code-name the FBI had given the Hillary Clinton investigation, which was Midyear Exam.

Strzok was also part of special counsel Robert Mueller’s team before the IG found the text messages between him and Page, and was subsequently removed from Mueller’s team. Strzok was the one that changed former FBI director James Comey’s initial statement exonerating Hillary Clinton and recommending no charges be filed against her.

One source told the news outlet that electronic records reveal that Strzok changed the language from “grossly negligent” to “extremely careless,” scrubbing a key word that could have had legal ramifications for Clinton. An individual who mishandled classified material could be prosecuted under federal law for “gross negligence.”

With the revelation from hundreds of pages of previously unreported emails and memos that were recently turned over to congress, that the FBI and DOJ was actively working with employees of Fusion GPS, which was reportedly paid $1 million by the Hillary Clinton campaign and the DNC, more and more evidence is mounting that members of the DOJ and the FBI were actively working to 1) Prevent Donald Trump from winning the 2016 presidential election, and; 2) Making sure they had their “insurance policy” in place in the event he did win the election so they could overthrow his presidency.