A search for CNN and Alex Jones shows they have been constantly harping about the Infowars app still being available at Google, Apple stores, and they have blatantly been attempting to force Twitter CEO Jack Dorsey to remove Jones/Infowars from from that social media platform as well. 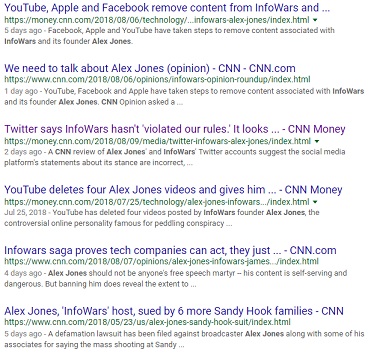 Senior CNN reporter Oliver Darcy has been leading the charge on Twitter, to the point where he appears to be creepily obsessed with 1) Alex Jones, and; 2) Censoring opinions and voices he does not agree with.

Darcy proudly boasted on August 6, 2018, that “Important to note that tech platforms did not enforce their own rules and take action against Alex Jones / InfoWars on their own accord. It took media outlets to point out for weeks that InfoWars was skirting the rules on these tech platforms for them to enforce own standards.”

As shown by another of Darcy’s tweet, where he linked to a CNN article, which details how CNN, obviously not having any real news to report, has decided to use their resources to scour Jones’ Twitter account and the videos on it, in their crusade to get Jones kicked off of Twitter.

Via the story Darcy linked on August 9: (Archive.is link here)

But a CNN review of Jones’ accounts show that all of the videos that initially led the other tech companies to take action against Jones were in fact posted to Twitter by Jones or InfoWars. All were still live on Twitter as of the time this article was published. CNN noted this in a request for comment from Twitter on Wednesday morning, before Harvey’s email was made public. The company declined to comment at the time.

Those videos were not the only content CNN found in its review of Jones’ and InfoWars’ Twitter accounts that suggest the social media platform’s statements about its stance are incorrect, or that its rules are not being applied to Jones and InfoWars.

It is very interesting that in that CNN piece, written by Darcy, he highlights Twitter rules against targeted harassment:

Twitter’s policies prohibit users from abusing others. “You may not engage in the targeted harassment of someone, or incite other people to do so,” Twitter’s rules say. “We consider abusive behavior an attempt to harass, intimidate, or silence someone else’s voice.”

The irony of Darcy writing that as he has, and still is, targeting Jones with harassment, with 14 tweets since August 6, in an attempt to force Twitter to “silence someone else’s voice,” namely Alex Jones.

A small sample below.

August 10:  Hey @jack, since you’re responding to stories in the press, maybe you can offer your thoughts on our story that shows Alex Jones / InfoWars appear to have repeatedly violated Twitter’s rules, despite statements from you otherwise.”

August 7: Add MailChimp to the list. The company told @mmfa that it has terminated the accounts for InfoWars: “We don’t allow people to use our platform to disseminate hateful content.”

Apparently it is alright for CNN and Darcy to target someone for harassment to silence their voices on the platform, if it furthers their campaign to have Alex Jones censored. 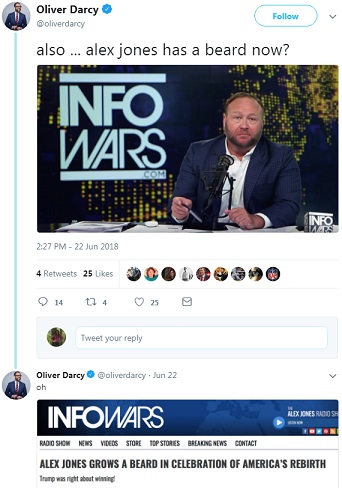 Remember, Darcy is a senior reporter for CNN.

The obsession with Jones is not just by Darcy, but by CNN as an entity. A search for “Alex Jones” on the CNN website brings up 315 results, with 12 separate articles since August 6th alone, when the tech companies all colluded to wipe him off their platforms collectively.