Just a few weeks ago we published China’s Oil Futures Contract Is Beginning to Show Its Teeth where we pointed out the astronomical growth of the yuan backed oil futures contracts. The number of contracts China is capturing on a daily basis is the key to damaging the petrodollar. We speculated, all the way back on July 24, 2018, that China would move into second place, globally, with the number of oil futures contracts by years end or no later than the end of Q1-19. We also stated:

We should have better data and a better view after the July numbers print. My guess is, the new China contract is going to continue growing and petrodollars are going to continue waning. Does it really matter if this new contract actually threatens the petrodollar? What if this new contract just takes enough business to sustain the Chinese need to move away from Federal Reserve Notes? You know, 10%, 20% – what about 50%? What if this new contract allows China to simply add more gold to their vault or another “leg” to the Belt and Road Initiative or another 15 nuclear plants/solar farms? Then what? Does it matter if it is a global force in the oil world? How much damage would a 35% (780,000 monthly contracts) decline in petrodollars create in the western economies? I’m guessing unrecoverable.

Chinese oil futures contracts denominated in yuan hit their daily limit with a 5-percent spike on Tuesday as the US kicked off the first round of sanctions against Iran.

Washington’s decision to withdraw from the Iran nuclear deal and target the country’s oil sector with sanctions is expected to significantly boost China’s leverage to demand crude imports be priced in yuan.

The first round of anti-Iran sanctions, targeting the country’s automotive sector and metals trading, took effect on Tuesday after midnight US Eastern Standard Time (4:01am GMT). Tougher restrictions, scheduled for early November, will reportedly be focused on Iran’s oil and shipping industries. Source

All eyes should be on November futures contracts to see what the impact could potentially be on the dollar backed oil contracts. If we are seeing a 5% spike on the first day of sanctions, when this round of sanctions has zero effect on oil or shipping, how will this translate when it does effect oil and shipping? WOW! This could seriously create a monetary shake up that reverberates through all markets.

Iran is a major crude supplier to China. US sanctions on Iran pushed China’s yuan-denominated oil futures contract nearly five percent higher, the biggest daily move since the petro-yuan’s inception in March. The main contract SC1809 closed at 537.2 yuan per barrel, rising by 25.5 yuan or 4.98 percent, according to Shanghai International Energy Exchange.

China is expected to become a chief beneficiary of the US unilateral sanctions against the world’s biggest energy producers, including Russia, Iran and Venezuela. The petro-yuan would save China the cost of exchanging dollars, the main global currency used in oil trade. It would also increase the use of the Chinese national currency in global financial trade, challenging the greenback. Source 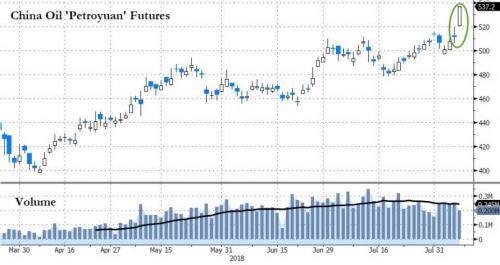 As we have already noted, it doesn’t take an absolute shift away from petrodollars to petroyuan. It only takes a fair percentage, like 25%, 30% or 35% and the damage would be far reaching. The Chinese contract is already performing far better than anyone anticipated and all this new action – which no one has priced in at this point – could potentially shake the global economic foundation.

With three of the worlds largest oil producers moving away from using Federal Reserve Notes, U.S. dollar backed oil contracts to a Peoples Bank of China, renminbi/yuan backed oil contract this may prove to be a devastating blow to the flow of dollars into the global economic system. Will this create a back flow of U.S. dollars to America and would that mean more inflation here at home? The Federal Reserve may be able to divert those dollars onto their balance sheet to keep them out of the overall economy which would protect the people but hurt the Fed but how long would that last? Or will the Fed have the option, since they own the literally worthless Federal Reserve Notes, to simply remove them from existence?

Will we see love bombs for Iran in the near future? Is this the main reason for all the Iran rhetoric of late? Can the U.S. seriously attack China, Iran or Russia or all three at the same time or even over a few months time? Sounds like suicide to me.

We already know the Iranians are acquiring gold to the tune of a four year high and with this news, and the potential impact, will the Iranians be lining up at the gold market creating an even greater flow of gold into Iran? My guess is they will be grabbing for even more of the shiny as November approaches.