The Purge Is In Full Swing

First They Came For Infowars……. Tomorrow We Will All Be Alex Jones: Independent Media Silenced – They Are Coming For Us All Now

The same liberal media that has been bitterly whining about their First Amendment right of a free press for the last week, claiming that is somehow endangered because rally attendees screamed #CNNSUCKS at them, are now celebrating the decision by Facebook to permanently remove Alex Jones and InfoWars pages from their platform on the same day that Apple has removed the entire library for five of Infowars’ six podcasts from its iTunes and Podcast apps.

This comes just days after YouTube removed multiple Alex Jones videos and gave him a community strike for alleged “hate speech,” which is the catch-all excuse being used by Apple, Facebook, and Spotify as their justification to silence him. A YouTube strike effectively prevents Jones from livestreaming his broadcasts on the platform. (I just clicked the Alex Jones Channel on YouTube, and received the message “This account has been terminated for violating YouTube’s community standards.”)

Apple, Spotify, Facebook and YouTube all banned Infowars within 12 hours of each other, illustrating how last night’s purge was a coordinated effort and has nothing to do with these platforms enforcing “hate speech” rules.

I don’t care if one agrees with Alex Jones or disagrees with him, if they love him or hate him, this coordinated attack against him and his InfoWars broadcasts and social media presence should severely concern everybody that sees the abusive liberal media bias and uses Independent Media to find information the establishment media won’t report.

In The Friends of Voltaire, Evelyn Beatrice Hall wrote the phrase: “I disapprove of what you say, but I will defend to the death your right to say it,” to illustrate Voltaire’s beliefs. 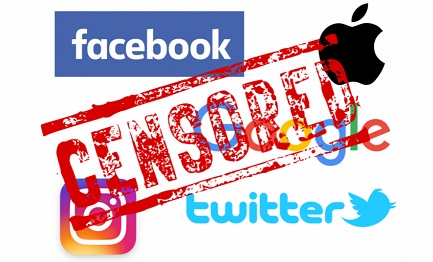 ALL INDEPENDENT MEDIA SHOULD BE STANDING UP FOR INFOWARS

Jones and his Infowars podcasts and website had an extensive reach, and it matters not that sometimes I agree with him, sometimes I do not, we must all stand up for his First Amendment right to free speech and free press, whether we agree or not, because this coordinated effort to completely silence him online is just their next step in an all out war against Independent Media.

After the 2016 election, where Independent Media bypassed the “official narrative” (Hillary Clinton must win) and helped prevent that fate for America, the attacks started. Washington Post helped push the disinformation campaign which listed 200+ Independent Media websites as “Russian propaganda,” as others added many of those same sites to “fake news” lists, alongside of actual hoax websites.

Then big tech started downranking search engine results, making sure the liberal media received the first pages of searches to limit the visibility of Independent Media sites, the exceptions being liberal bloggers. Then Google’s YouTube started demonetizing video creators work, if it didn’t comply with the liberal media narrative. Then revenue streams started paying less for the same amount of impressions, basically using the lower paying advertisers on sites they wanted to limit revenue to. Then social media started shadow banning conservatives, suspending their accounts, limiting the visibility of their posts. Liberals started campaigns of online harassment against advertisers that had ads on Breitbart, Infowars and other conservative news outlets.

The coordinated attacks against Independent Media had but one goal….. to silence our voices.

Martin Niemöller, a prominent Protestant pastor who emerged as an outspoken public foe of Adolf Hitler and spent the last seven years of Nazi rule in concentration camps, is well known for the following quotation: