Has President Trump Weaponized the Fed?

Warning… the following involves politics. We are neither pro- nor anti-the Trump administration, unfortunately we have to include political issues in our framework for understanding the markets.

For the last few months, it’s been an ongoing question… why is the Fed THIS hawkish at a time when the BoJ and ECB are engaged in NIRP as well as QE programs.

Don’t get me wrong, I believe the Fed should be hawkish… but eight planned rate hikes while engaging in a QT program that will reduce the Fed balance sheet by an amount equal to Sweden’s GDP every year is beyond excessive.

Moreover, the Fed’s policies are pushing the $USD sharply higher… which is causing a meltdown in the Emerging Markets. As the below chart shows, every push higher in the $USD has pushed Emerging Markets and China down. 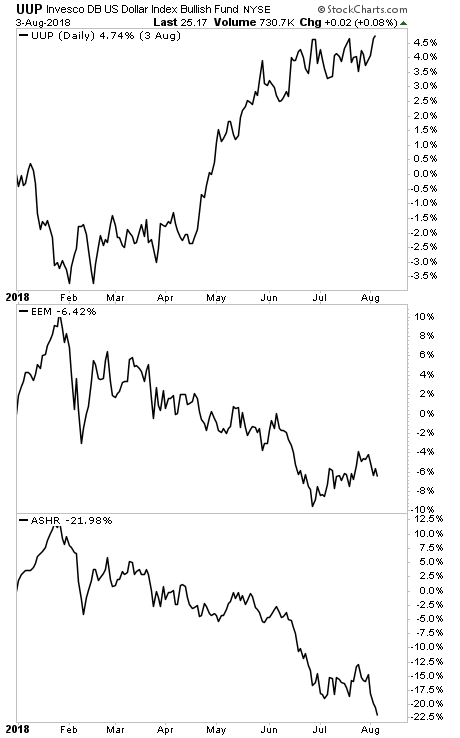 Then, over the weekend, President Trump tweeted the following:

Tariffs are working far better than anyone ever anticipated. China market has dropped 27% in last 4months, and they are talking to us. Our market is stronger than ever, and will go up dramatically when these horrible Trade Deals are successfully renegotiated. America First…

Turn off any personal political bias for a moment… the President of the United States just outlined a specific drop (27%)in China’s stock market over a specific time frame (four months). And he did so within the context of his administration’s trade negotiations.

We know that the Trump administration views the stock market as a “report card.” And now we know that they apply that same metric to foreign markets.

1)   The Fed, which is run by Jerome Powell, who President Trump appointed in January, is currently engaged in the most hawkish monetary policy in Fed history.

3)   This is taking place at a time when the Trump administration is putting pressure on China to renegotiate trade issues.

4)   The President himself just publicly noted that China’s stock market is dropping hard while the US’s continues to fare well. He linked this to his administration’s trade negotiations with China.

This raises the question… has the Trump administration weaponized the Fed?

Put another way, did President Trump tell the Powell Fed to be as hawkish as possible as leverage against China during the trade disputes?

Take a look at the below chart with this question in your mind. 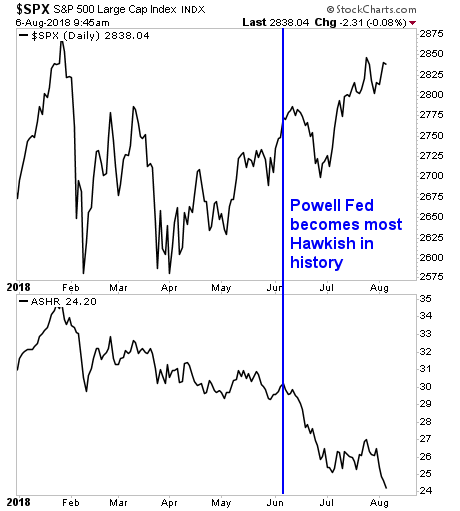 It will be available exclusively to our clients. If you’d like to have a copy delivered to your inbox when it’s completed, you can join the wait-list here: