The level of complete blindness and intellectual dishonesty on the part of the establishment media still manages to astound me.  Their inability to “see” that from the very start of the Trump presidency they have deliberately done everything in the power to terrify the nation, causing an epidemic of “Trump Anxiety Disorder,” that has led to hundreds of examples of violence and harassment against Trump supporters, yet now whining that President Trump’s statements about the Fake News being the “enemy of the people,”  is “dangerous,” and “will lead to violence.”

FROM DAY ONE THE MEDIA DELIBERATELY TERRIFIED LIBERALS

Many have seen the flashback video below, but in order to adequately show proof of the establishment media deliberately and irresponsibly terrifying liberals all across the U.S., we have to remember the immediate and very public, on-air statements, aka meltdowns, from well known names in the media, who are supposed to report the “news” objectively, and high profile talk show hosts.

Jumping back to present day: ANP reported just days ago that therapists across the country are seeing an epidemic of what they call “Trump Anxiety Disorder,” from their patients. In that report we quoted multiple mental health experts that specifically cited constant “negative media coverage,” as one of the reasons for the TAD they are seeing, which they admitted was the same malady which conservatives have dubbed “Trump Derangement Syndrome.” (Read more about that here)

In those nearly two years, ANP and many others have documented a significant number of actual “fake news” stories from the establishment media about President Trump. Many needed corrections, editors notes, retractions, deletions and total rewriting, including title changes, because the initial reports were completely false and/or misleading. In one case the errors were so egregious an ABC News anchor, Brian Ross was suspended without pay after his fake news tanked the stock market, and in another case three CNN employees were forced to resign. 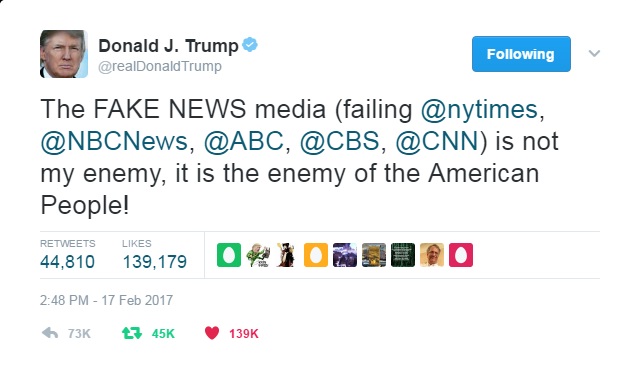 Back in July 2017, long time, and former left-leaning journalist Michael Goodwin, in an outstanding article, discussed “why the media has broken down in the age of Trump,” and put the majority of the blame on the New York Times and the Washington Post, stating “The two leading liberal newspapers were trying to top each other in their demonization of Trump and his supporters. They set the tone, and most of the rest of the media followed like lemmings.”