Trump Speaks (Well, Tweets). Tech Totalitarians May Not Succeed In Forcing Patriots Back to the Newsletter Days

Trump Speaks (Well, Tweets). Tech Totalitarians May Not Succeed In Forcing Patriots Back to the Newsletter Days by Peter Bradley – UNZ Review

Finally, the purge of patriots by Twitter, You Tube, Facebook, PayPal and other Silicon Valley SJWs is getting pushback—President Trump tweeted this morning against political shadow-banning, GOP Congressman Matt Gaetz (NumbersUSA Grade: A+) is enraged that his Twitter account was (incredibly) sandbagged after he criticized the company in a hearing [Rep. Congressman Threatens Twitter With Complaint Over ‘Shadow Banning,’ Sputniknews.com, July 26, 2018] and American Renaissance’s law suit against its Twitter ban has cleared the first hurdle, establishing the critical point that Politically Correct purgers face legal consequences. Which is great—because I remember the Dark Age before the internet: The Newsletter Days.

As a 25-year veteran of Dissident Right movements, I can easily state that the last few years have been the most satisfying. No longer did we have to wait for an occasionally truthful article in National Review on race riots or a candid comment on racial double standards from Rush Limbaugh. Literally thousands of people can and do respond to Leftist reporters, politicians, academics, administrators, politicians and activists directly through social media. How many “normies” have been converted to the truth by simply viewing these exchanges?

This was the Dissident Right world that I discovered as a college student in the early 1990s. I use the word “discovered” advisedly, as heterodox outlets were extremely hard to find. With no Internet and an almost absolute ban in the Main Stream Media, you had to dig for mailing addresses and search in libraries for forbidden material. 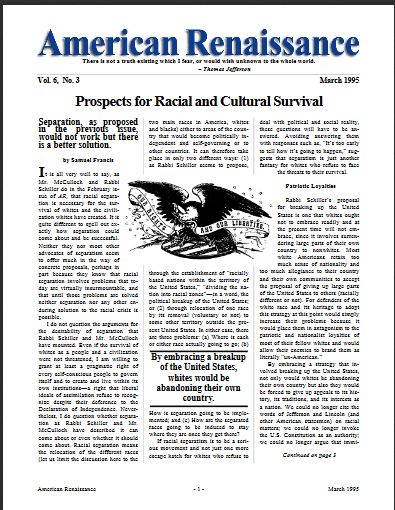 My own journey began when I found Paved With Good Intentions, which helped explainwhat I was seeing around me with regard to race. A few years later, I discovered Chronicles magazinethanks to a (very negative) chapter in Dead Rightby David Frum. In 1995, I was able to access the Internet for the first time from a work computer. Most sites back then were essentially billboards, but I did manage to find American Renaissance and subscribed to the treezine newsletterimmediately.

From there, I was able to locate and subscribe to a litany of the most famous (or infamous) dissident newsletters of the 1990s. My mailbox was a veritable hit parade of SPLC thought criminals. The Rothbard-Rockwell Report, Sobrans, The Samuel Francis Letter, The Last Ditch, The Citizen’s Informer, Middle American News and Instauration were my lifeline to sanity.

Nowadays, young patriots can simply log on to the Internet and be connected in seconds to the most recent news, reviews, blogs and happenings. But in the mid-1990s we had to wait for the mailman to deliver a monthly print issue.

I can still recall the excitement to open the mailbox and find a new American Renaissance or Chronicles had arrived. I knew that hours of informative reading lay ahead about the issues that would shape our future as a people.

Though I knew almost no one personally on the Dissident Right, I realized that people who thought like me existed throughout the US and even the world. I was introduced to books that were not reviewed in the New York Times (or the post-purge National Review) and philosophers who were not taught or even mentioned in my college courses. I would eventually attend conferences put on by the John Randolph Club and American Renaissance. There I was able to meet other dissidents in person for the first time. Most had similar stories of how they arrived at the truth.