While this article will detail far more than just one image that captures the evil essence of the so-called #Resistance of the left, and Trump haters, who sound more and more like their liberal counterparts every day,  the shocking “art” in the window of ‘The One Grand Gallery,” in Portland, Oregon, pretty much says it all. 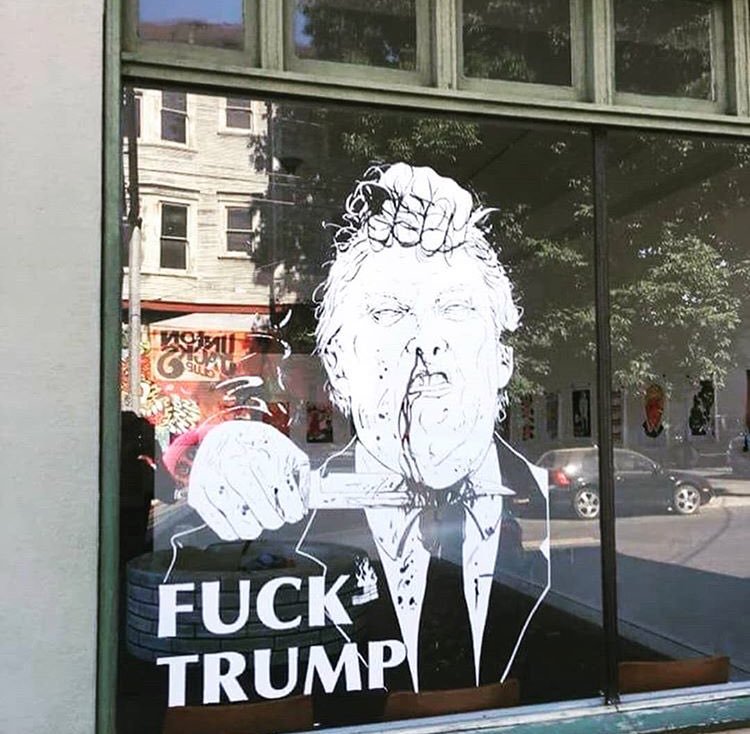 That is today’s left encapsulated in one image, a representation of what can be seen on almost any social media platform, chat rooms, forums and comment sections of liberal websites, where threats against the president’s children, his administration officials, where hatred and vitriol is spewed in social media posts, by the thousands per day, and where death threats have become a common things for #resistance members to wish upon Trump supporters.

While at first I thought it was a photoshopped image or a hoax, a look at their Facebook page after people started reporting them to the Secret Service, admits it is indeed part of their display, as they show the same image, with the message “The same people offended over a “death threat” are the same people upholding death threats & violence. Irony.”

Personally, what I see as ironic is their claim that Trump supporters, and as seen in the comment section of their Facebook post, even those that do not support President Trump but are offended over the image, are “upholding death threats and violence,” when Breitbart has now provided a list of documented cases of violence, hate  and/or harassment by the the radical left against Trump supporters and administration officials.

While I won’t reinvent the wheel by discussing each of the harassment/violent events, I would like to highlight some of the most recent egregious examples, where radical resistance (liberals) have chased a pro-Trump group out of a bar, left threatening voicemails and emails to a GOP Representative from Idaho, threatened to “curb stomp” a Trump supporter at Disneyland, harassed Trump administration officials on the street and in grocery stores, and harassed a former Trump administration official at a bookstore.

Another example recently reported is explained in the interview below, where a group of young Republican campaign volunteers were in Raleigh, North Carolina, obtained a ride by Uber, and the driver pulled into a gas station, then kicked them out. After dumping them in an unfamiliar place that was not their original destination, he told them “welcome to the #resistance” before stranding them there.