The media’s Trump Derangement Syndrome is contagious and they continue to deliberately spread it throughout the “Resistance” movement.

After documenting the dozens of examples of media malpractice, lies, outright fake news, misleading headlines, retractions, deletions, corrections and apologies, over the past couple of years, I still find myself shaking my head in disgust when browsing through the news online and see a series of examples that prove Trump Derangement Syndrome has gotten even worse among those that consider themselves the media elite.

In their never-ending rush to mislead, or to find something, anything to insult or degrade President Trump, multiple journalists rushed to Twitter to “inform” their followers/readers that President Trump told Finnish President Sauli Niinistö “I enjoyed being with you a couple of days ago. NATO has, I think, never been stronger. It was a little bit tough at the beginning, but it turned out to be love. I appreciated your support.”

Had they all stopped right there, they would have reported something that actually happened, but they didn’t stop there.

Each of these so-called reporters, which includes Henry Foy from Financial Times, Josh Rogin, a Washington Post analyst and CNN commentator, Julie Davis, a NYT writer and CNN analyst, and Sebastian Fischer from Speigel Online, all informed their followers that Finland is not in NATO, with Rogin even using the hashtag #awkward to imply that President Trump screwed up and Niinistö wasn’t at the NATO Summit.

Julie Davis from New York Times was even more snarky, asking “Does he think Finland is in NATO?”

Rather than rushing to drag the president, had any of them simply done even ten seconds of research, (like going to Finnish President Sauli Niinistö’s Twitter page), they would have known that while he is not a member of NATO, he was at the NATO summit, and had posted images during the event. 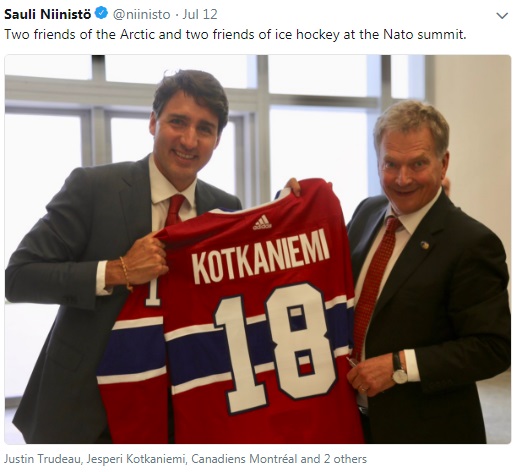 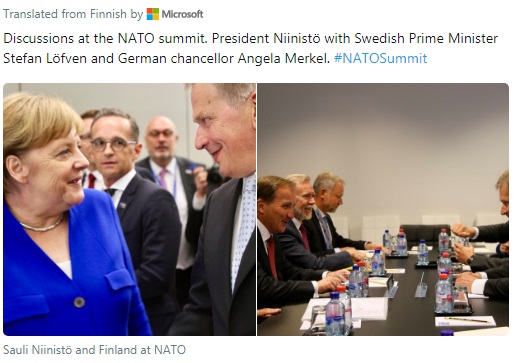 Not bad enough these “journalists” couldn’t be bothered to find out that the Finnish president was at the NATO summit, but between them all they had their very misleading “news” retweeted more than 8,000 times, with over 19,000 likes. Each of the 8,000+ retweets then went out to all the followers of those that shared the Fake News.

Comments in their original tweets call Trump clueless, saying President Trump doesn’t share the same reality, calling him “colossally stupid,” and on and on it goes. So they misinform their readers, then those readers go out and spread the same misinformation to their followers, and now because those media personalities are so sick with Trump Derangement Syndrome, they have managed to mislead thousands and thousands of Americans.

Granted, there are some in those comments trying to correct the record, offer the facts and proof that the reporters got it wrong, but those are barely acknowledged.

While his original tweet, two minutes before, had garnered 2.4K retweets, his correction only garnered 84 retweets. 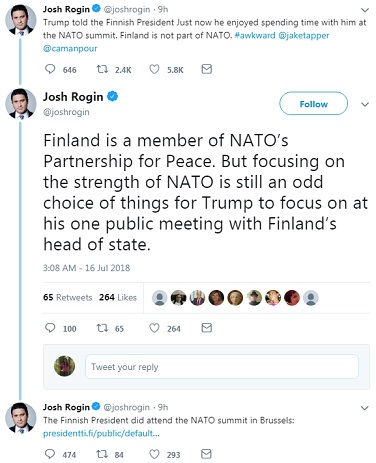 Their TDS is highly contagious and the fact that it spreads so quickly with every misleading story or message, shows why Trump Derangement Syndrome has become an epidemic at this point throughout the “Resistance.”

THIS IS WHAT THE MEDIA HAS BECOME

Moving along because different media outlets have been very busy as well. Huffington Post provides an example of exactly what “journalism” has become today.