Triggered Snowflakes Everywhere Prove Scientific Study True, Liberals Are Psychotic And It is Getting Exponentially Worse By Susan Duclos – All News PipeLine

Flashback 2016: “The American Journal of Political Science published a correction this year saying that the 2012 paper has “an error” — and that liberal political beliefs, not conservative ones, are actually linked to psychoticism.” – NYP

When I read that originally in 2016, while in the midst of documenting some truly strange and deranged behavior on the part of liberals across the internet, and in the media, I really wasn’t surprised. The charts from the study titled “Correlation Not Causation: The Relationship between Personality Traits and Political Ideologies,” give a visual representation of this issue.

(Charts and descriptions from the study via Louder with Crowder) On the graph below, we see the major depression breakdown for the Very Conservative (VC), Conservative (C), Liberal (L), and Very Liberal (VL) cohorts.

Below, we see the rates of bipolar depression among our political cohorts. Again, we see elevations in the Very Liberals and Liberals, especially the females. Out of the 50 Very Conservative females that responded to our survey, none reported bipolar depression.

That study was originally published in 2012, and if what is being seen across the nation present day is any indicator, I would say that following the 2016 presidential election, those numbers have probably doubled.

Each and every day we see a liberal or a person with Trump Derangement Syndrome get absolutely triggered by …. well, by just about anything, real or imagined.

College Campus Snowflakes: A look through the Campus Reform and College Fix websites show us that snowflakism on university campuses is exponentially on the rise, as we see progressive liberals are being triggered over a picture because one girl in the picture had (GASP) braided hair, accusing her of “cultural appropriation,” while another girl on different campus gets triggered over an anti-socialism display, as seen in the video below.

Just browsing through those two websites, seeing what these students are being “taught,” where social justice is something they are offering degrees for, and teachers are now detailing “everyday microaggressions,” from her white colleagues in order to overcome her own “whiteness.”

What does that even mean? The crazy starts in the schools, which is how we end up with the examples below.

For example: Comedic has-been Rosie O’Donnell completely melted down on Twitter, ranting at President Trump in a tweet he was guaranteed to not see because he has her blocked, and she knew he couldn’t see it because she begins the rant with the words “unblock me.” Screen shot from Twitchy, where readers can also see some of the reactions to her screed, such as suggesting Rosie seek mental help immediately. 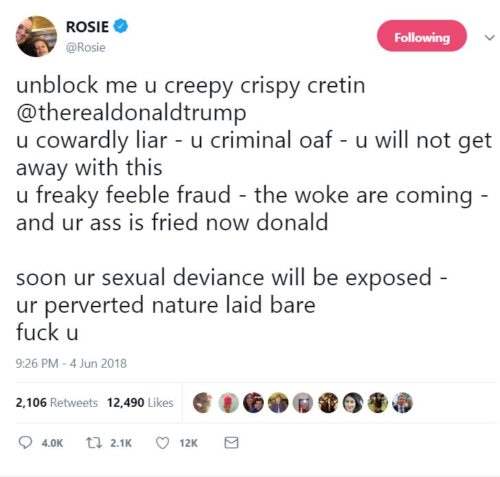 A look through her timeline has me agreeing she does need mental help, she is obsessed with President Trump to the point where she sounds deranged on a daily basis.