A Whole Lot Of Wrong In The #Resistance Liberal Party

There Is Something Very, Very Crazy With These People

#Resistance Liberals, not to be mistaken with regular Democrats who simply have a different political ideology on social/financial  issues than those of us on the other side of the political aisle, are bat-crap crazy if recent events are anything to go by.

Forget politics for a moment and lets take a look at the members of the so-called #Resistance, where anything, no matter what it is, no matter if they once agreed with a position or not, if President Trump says it and does it, they must #Resist! Not out of any political differences, but because they absolutely hate, not only President Trump but anyone that supports him. 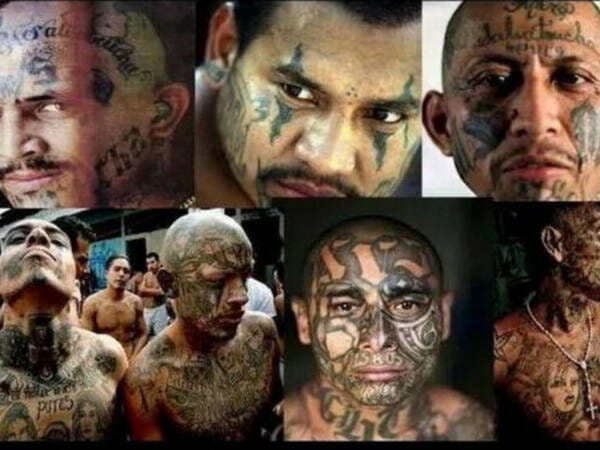 Well start with one of the most bizarre examples. The level of support that #Resistance liberals, online and within the media, offered to MS-13 gang members, to the point of defending them after President Trump called them animals. First the media used a selectively edited clip, making it appear that the president called all immigrants animals, then after being busted, some deleted their original promotions and admitted he was referencing MS-13, but then they went completely off the rails.

Before showing how #resistance liberals defended MS-13 gang members, a quick note on the types of crimes they commit, such as:

•  Killing a 15 year-old girl by torturing her and stabbing her, and filming it;

• Brutally murdering a 17 year old boy, mutilating him, stabbing him 16 times, running him over and removing his hands;

• 10 MS-13 members stabbed a man more than 100 times in Maryland. They decapitated him and cut out his heart.

• MS-13 members shot an unidentified girl who was thought to be 15 in the head and chest, leaving her body in the middle of a busy street in Houston’s Chinatown. The murderer said he killed her to appease Satan. “The beast did not want a material offering, but wanted a soul.”

• A 15-year-old girl was tortured, had a tattoo cut off, and then was stabbed to death. (Source)

The heinous stories go on and on, all documented cases where murder, torture, rape, dismemberment, mutilation is simply the tip of the iceberg.

So, President Trump called them animals, and stop the presses, liberal politicians and media personalities rushed to defend these monsters, with Rep. Joe Crowley (D – New York) saying in part “calling any human being an animal, regardless of what they’re about, we want to get rid of them, we want them out of the country, they’re still human beings. They’re still human beings. It’s not even dog whispering anymore…dog whistling. It’s out and out, open attack on immigrants that this President is talking about and I find that disgusting.”

House minority leader Nancy Pelosi said they have a “spark of divinity,” because “we’re all God’s children. She, of course, was still pretending that President Trump was talking about all immigrants.

I could pretty much fill up a whole article on with crazy reactions from #Resistance liberals from across the internet, and politician’s statements, but there is a whole lot of crazy I want to address in this article, so we will give Sarah Huckabee-Sanders the last word here.

Comedian Samantha Bee from TBS’s Full Frontal, (Owned by Time Warner, parent company of CNN), went on public television and called Ivanka Trump a “feckless c**t,” (vile description for vagina) suggesting she put on tight and low clothing and go talk to her father about his policies.

Needless to say conservatives all across the Internet reacted, many of which pointing out what the reaction would have been had a conservative comedian or commentator dare call Chelsea Clinton, or the Obama daughters such a term, but liberals and some media members, just waved the remarks away.

Conservative reactions came in large part because of the double standard regarding Bee’s commentary on public television, after Roseanne Barr’s show was suspended for saying that the baby of Muslim Brotherhood and Planet of the Apes equals VJ (Valerie Jarrett) in a tweet, despite Roseanne immediately apologizing after being informed that Jarrett was half African American.

HollyWhores immediately jumped to Bee’s defense to attack Ivanka, with has-been actress Sally Field saying “I like Samantha Bee a lot, but she is flat wrong to call Ivanka a c*nt. C*nts are powerful, beautiful, nurturing and honest.” Comedian Billy Eichner said “Honestly I think Samantha Bee was being generous..” Filmmaker Michael Moore called Bee’s rant “brilliant.” NYT writer Amblyn Tamblyn chimed in with “Good morning. Samantha Bee is a national treasure and one of the only exemplifications women have of anger in this country. She is our catharsis, mirroring our outrage. Comparing her words to that of Roseanne Barr, a complacent bigoted, is like comparing apples to rotting fruit.” (Source, with more reactions)

Notice the incredible dishonesty there of never mentioning that Roseanne was unaware of Jarrett’s genealogy, and apologized as soon as she was told, while Bee’s apology came the next day, with TBS pulling her segment off the air and off YouTube in an attempt to scrub the Internet of it, as well as the double standard in how Roseanne lost her show, but Bee was given an award the next night.

As Twitchy points out with screen shots, it appears that Bee’s male co-workers also have a nasty habit of calling conservative women that very same name, so they conclude, with Bee’s show  “it is a feature, not a bug.”

Speaking of Nasty, here is a flashback from 2017: 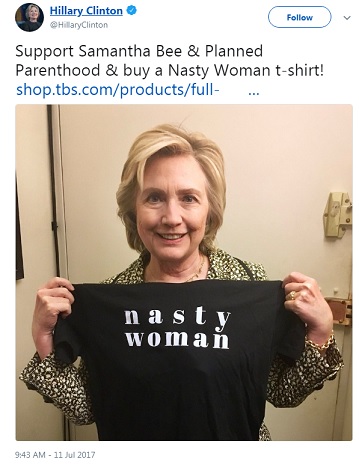 Guess we now know why Hillary has posted a dozen times since the Bee controversy, yet hasn’t addressed the Ivanka issue even once.

Other reactions range from a female writer over at Daily Beast praising the C-word itself, in some twisted attempt to normalize it, to other social media users trying to out-do Bee’s crassness. To give credit where it is due, two CNN personalities, Brooke Baldwin and Anchor John King, slammed Bee’s commentary.