Back in the Volatility Saddle Again

Back in the Volatility Saddle Again by Michael J. Ballanger – The AU Report

One week ago today, I made the following commentary:

“Finally, I am officially revisiting the “volatility trade” (VIX: CBOE Volatililty Index) but unlike February where I used the UVXY (ProShares Trust Ultra VIX Short) as my proxy for the increase in volatility, I am using the TVIX (VelocityShares Daily 2X VIX ST ETN) because it is a double leverage ETF for the VIX but has better leverage than the UVXY. UVXY used to be a triple-leverage play on volatility but the slippage due to its dependence on futures became too difficult to navigate and they cut the leverage from 3:1 to 2:1. I had a 250% gain on this in February but gave back 9.84% in April. I am long 50% of the TVIX position from yesterday at $4.95 and am using the opening this morning to add another 25% in the $5.25 range. I will again use a 10% stop-loss but since the 52-week low is $4.60, that will be the exit level. Upside target will be $8.00 remembering of course that the 52-week high was $26.56.The month of May is rapidly coming to a close, which starts what is historically the worst six months of the year. With the situations in Turkey and Italy worsening, with the North Korean summit in question, central banks engaged in “quantitative tightening,” rising oil prices, and the possibility that the China-U.S. trade talks go south, markets are going to be in peril as summer illiquidity arrives. For this reason, gold “should” be the go-to asset, but I am banking on volatility rather than gold as the preferred method of riding the correction.”

In the Monday overnight session, the words “panic,” “contagion,” and “implosion” were being bandied about while the S&P futures were off sharply when I arrived at the gym yesterday at 7:00 a.m. Sure enough, gold and silver did not respond to the developing crisis in Europe because U.S. dollar strength is significantly more important to gold demand than Italy and Spain vaporizing in front of our very eyes.

Monetary panic doesn’t throw the slightest of bids into the precious metals any more because they can simply buy the VIX as a hedge because gambling on a piece of financially engineered paper like the VIX ETFs is infinitely more sensible than owning a monetary metal with 5,000 years of well-earned legacy as a preserver of wealth. The huge sell-off in gold initially in response to the currency swing was reversed in the Tuesday afternoon session and what was a $12.30 loss became a slight positive by 2:00 p.m. The chart below of the VIX index shows a gap on January 29, which precluded the moonshot to $49.21 a week later. Since I have been accumulating the TVIX under $5.00 all last week and on Monday, Tuesday’s 38.2% move in the VIX Index was accompanied by a 25.5% move in the TVIX. While our $8.00 target seems a tad conservative given the move in February to $26.56, I have grown to appreciate base hits and doubles over home runs lately, which might be a function of my age or pondering last year’s capital gains/losses report completed last month.

Wednesday’s 38-point rebound in the S&P 500 caused the VIX to give back 13.69% and the TVIX to give back 9.1%, but I continue to gather in “VOL” on dips because those two gaps in January and againTuesday day may be indicative of a violent return of the type of action that allows for a 250% return in eight days as we experienced back in very early February. Furthermore, to have a 32-point decline followed the very next day with a 35-point rebound followed by today’s 18-point drop is classic volatility, and that is not the type of stock market behavior that instills investor confidence.

The next big story and one which is being underplayed by the financial media is the current debacle called Deutsche Bank (DB:US), which this morning took out the lows of September 2016 and is now resembling a company in severe duress. I did a quick scan of headlines for DB over the past five years and notwithstanding that DB holds the largest derivatives book on the globe, this bank has been infested with numerous problems over the last few years. Mortgage fraud, gold manipulation, Libor fraud and now massive layoffs would imply that all is not well with this behemoth that truly is the ultimate in “Too Big to Fail” financial institutions. The leverage they carry representing sovereign debt positions would create a counterparty contagion the likes of which would make the 2007–2008 subprime crisis look like May Day picnic. The fact that they are the one bullion bank most responsible for the overt and unsanctioned shenanigans in gold and silver makes their current woes doubly satisfying for metals buffs like us, but you must realize that having Deutsche Bank implode would send shock waves through all of our markets triggering gargantuan liquidity squeezes, which means that long positions in everything would be thrown overboard in order to reduce the leverage that is keeping these markets afloat. This is again why I see the volatility trade as the best method of protecting one’s wealth given the vacuous moves by the Trump administration to impose tariffs on Mexico, Canada and the Eurozone.

Interestingly, the only way to judge the collective risk appetite of the junior resource sector is to glance (if you can stomach it) at a chart of the TSX Venture Exchange (CDNX) which, after reclaiming the 800-level back in April, has once again succumbed to seasonal weakness and is threatening to take out the April low around 754. Every year, I always make a vow to reduce my exposure to zero by the end of March with a view to buying back my favorite TSX.V juniors between mid-August and Labor Day and every June I wind up kicking myself in my own backside for failing to listen in earnest to my own wise counsel. There are isolated pockets of strength out there but they are invariably found in “story stocks” and usually related to something other than gold or silver or exploration issues. It is truly incredible to look back at a chart of the TSX.V from 2001 to 2007 and to recall the moves we enjoyed in the Senior Golds (GDX) and even greater gains in the Junior Golds (GDXJ). Even after the Financial Crisis and meltdown in 2007–2008, the rebound in the TSX.V from the Crash lows of late 2008 at 666 saw a number of exploration issues perform exceedingly well even though the TSX.V could only rally to two-thirds of its 2007 peak.

So why do I feel it necessary to remind us all of just how LOUSY the juniors have acted since 2011? It is because of charts like this one shown below, which is that of Novo Resources Corp. (NVO.V) whose Karratha gold project in the western part of Australia has been compared to the mighty Witwatersrand region of South Africa. A few months back in October I made this remark regarding NVO: “I sincerely hope that the all of this pseudo-scientific analysis surrounding these so called “Witwatersrand characteristics” have not replaced actual drilling or (better still) bulk sample results as justification for owning the stock.” 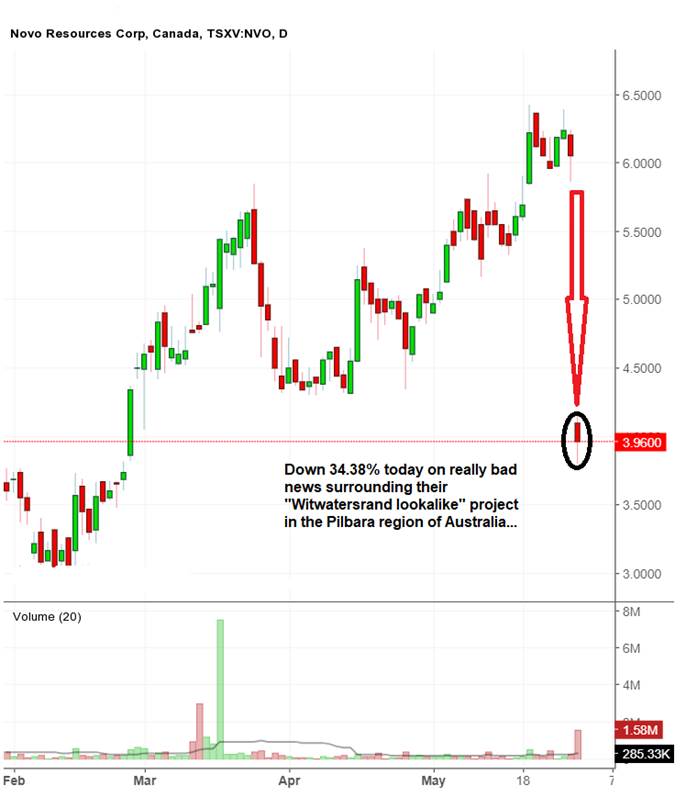 The stock peaked in October 2017 at around $8.50, and after I had finished reading all of the reports on the exploration merits of the Pilbara region, I concluded that it was about as close to a perfect “story” as could ever be written. In fact, it was such a good story that it brought to mind the words of a famous mining promoter from the 1970s who coined the phrase “Why ruin a great property by drilling it?” Falling squarely into the category of “You just can’t make this sh1t up!,” to compare this as yet untested region to the Witwatersrand is analogous to comparing Mark’s Work Warehouse to Amazon. The Witwatersrand has produced over 1.7 billion ounces of gold since the initial discovery in 1886. At today’s gold price, that is $2,292,160,000,000 (U.S.) worth of metal so it is quite easy to see how NVO.V could command a speculative market cap of over $1.3 billion with that kind of upside potential being used as a financial divining rod.