After browsing through the news this week, it would not surprise me in the least if we soon heard  from the media that the sky is green and the grass is blue, because the nature of some of the news coming out these days, truly does make it seem like we are living in the Twilight Zone. (For youngsters, learn what Twilight Zone was at IMDb)

Could anyone imagine that in Ireland, where 78 percent of the population identified as Catholic in 2016, they are now be celebrating in the streets because they can kill babies after the voters favored repealing part of their constitution that banned abortions?

Or how about seeing that the UK has become so Islamicized that a man, Tommy Robinson, is arrested for livestreaming outside of a trial of a child grooming gang, with the claim that he was “breaching the peace.” Robinsion was then carted off to jail to serve a previous 13 month sentence that had been suspended, just for reporting on the child grooming gang that has been charged with child rape, trafficking and supply of Class A drugs to children. To top it all off, reporters that were documenting the trial and arrest of Robinson have been forced to scrub the reports, saying there has been a “reporting restriction” put in place. 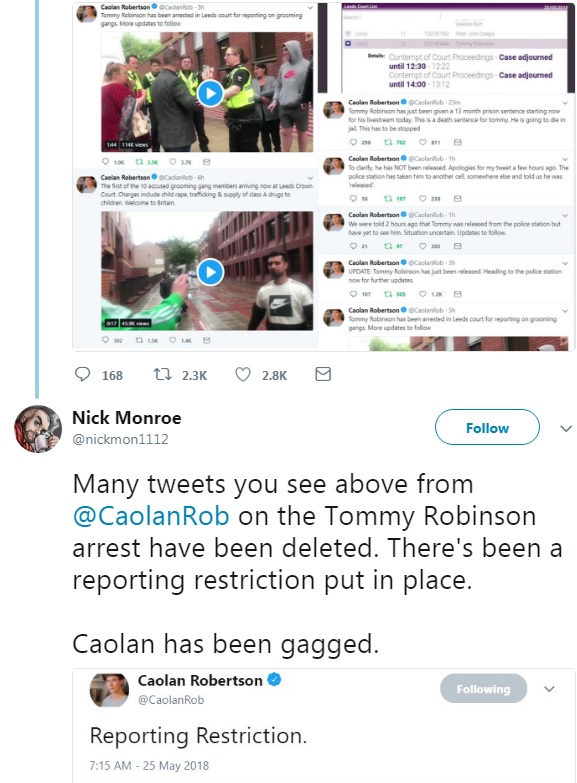 The arrest was filmed, shown below:

We have the Mockingbird Media spending countless hours with hundreds of headlines to claim that a man sent to covertly spy on members of a presidential campaign, paid by for the FBI of an administration from the opposing party, shouldn’t be called a “spy.” So intent to cover up and distract from the actual news, that they are busy hammering their audience with semantics over a “word,” and the meaning of said word. The man that was spying wasn’t a spy, the media claims, he was an “informant,” or a “Confidential Human Source.”

Never have I see the MSM work this hard to avoid reporting the news just to distract their audience from learning about the mass-scale misconduct on the part of the Obama administration and the actions of senior level members of intelligence agencies under him. If we weren’t in the Twilight Zone this would be a story that true investigative journalists would be salivating over, rushing to interview people, turning over every rock and stone to get to the bottom of it all, but no, alas, they would rather debate the meaning of a “word.”

Reminds me of a Bill Clinton quote “It depends upon what the meaning of the word ‘is’ is.”

How many ever thought they would live to see the leaders of North Korea and South Korea hugging, talking, laughing and holding hands, after decades of being at war? Not only have we witnessed that historical moment, but in the course of a few weeks, we have now seen it twice. Or, despite setbacks that had people clutching their pearls and declaring WWIII was about to begin, seeing the U.S. sending a pre-advance team to Singapore to prepare for a possible U.S.- North Korea summit?