REVEALED: The Date of the Next Big Drop

REVEALED: The Date of the Next Big Drop by Brian Maher – Daily Reckoning

Today we reveal the precise date of the next market drop.

When is it… why that specific date… and what will cause it?

Some mornings stocks would rise for no apparent reason… as from the stroke of an enchanter’s wand.

I tried to understand what was driving the markets at every point. I focused on technical levels, monitored the news and spent way too long staring at the screens.

But on some days, the stock market would get mysteriously strong. It would usually occur midmorning. Often stocks would sag near the open, look like they wanted to break lower, when all of a sudden — out of the blue — stocks would go bid. I couldn’t understand it. There was no “reason” why they should be rising. Yet they did.

No answers were issuing.

But one day he stubbed his toe on the answer…

These unexplained surges occurred only on specific days.

What days were these?

Days of quantitative easing — when the Federal Reserve expanded its balance sheet through bond purchases.

The scales fell away from his eyes… like Paul on the way to Damascus:

I know it seems crazy, but the Federal Reserve’s bond buying had a direct and immediate effect on the stock market. I don’t know why the relationship would be so unequivocal, but I learned the hard way not to fight the Fed on days when they [expanded their balance sheet].

We know quantitative easing worked miracles for stocks — but the same day?

Was Muir chasing a phantom?

Sometimes a fellow connects some random dots and his imagination runs off with him.

But he tortured his theory… worried it… ran it through the rollers.

Then he started over again.

His observations proved solid as oak.

And the larger the Fed’s bond purchases… the higher stocks rose that day.

Associate Wolf Richter informs us over $100 billion has already rolled off the Fed’s $4.3 trillion balance sheet.

That balance sheet is presently perched at its lowest point since June 2014.

And the trimming is gathering pace: 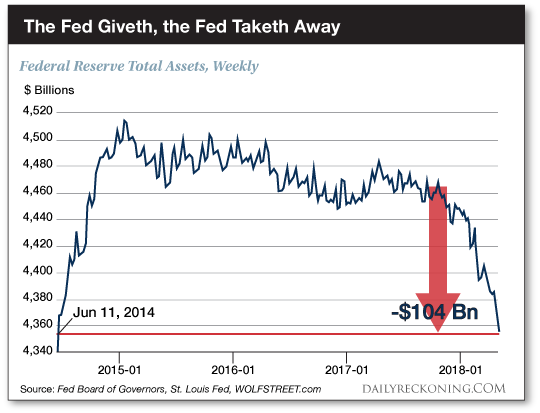 Could this chart partly explain why the Dow Jones is down since the beginning of the year?

And why the S&P is essentially flat?

Yes, trade wars and other bugaboos have settled over the market like a London fog.

But stocks have barreled their way through every fog bank for the past several years.