Question: What do journalists, comedians, democratic politicians, the MSM, liberals, and NeverTrumpers have in common….aside from all being Trump-bashers and haters?

Answer: Over the course of the last three days, certain segments of each of those same groups are now criticizing all the Trump-bashing and the Russia obsession.

As regular readers are aware, whenever we see a convergence of a narrative being pushed in a very short time-frame, it generally indicates the propaganda arm of the Democratic party, aka the MSM,  has been given its marching orders, the preferred tone of coverage, in an attempt to “control what people think,” as was so succinctly phrased by a member of the media.

DEMOCRATS COMPLAIN ABOUT TOO MUCH RUSSIA FOCUS

This perhaps is the most ironic of the examples that will be shown, because according to the Daily Beast “Dems Give Up on Trying to Get Cable News to Care About Anything but Russia.” Yes, really, that is the headline. Democrats, according to this bit of complete revisionist history, spent most of 2017 trying to get cable news to talk about their agenda, and to stop talking about Russia.

Throughout the spring and early summer of 2017, congressional Democrats put together a comprehensive legislative and messaging plan to serve as the party’s foundation for the 2018 midterm elections.

It centered around running against the concentration of economic power—chiefly within the pharmaceutical industry—and an ambitious, multi-faceted approach to enhancing conditions for workers both within and outside the workplace.

The title was a bit cookie-cutter—”A Better Deal”—but the document was the result of numerous stakeholder meetings, strategy sessions, and late-night conferring.

Naturally, the party wanted to have a flashy debut. So lawmakers went to Berryville, Virginia—a town in a district that Democrats had lost in the 2016 elections but were poised to flip in the upcoming cycle—to formally announce the plan. When they came back to D.C, they conducted additional press briefings in hopes of flooding the news cycle.

And then Jared Kushner stepped out of the West Wing to a horde of cameras, to proclaim his innocence in the still nascent probe into Russian election meddling. “Let me be very clear,” Kushner said. “I did not collude with Russia, nor do I know of anyone else on the campaign who did so.”

In an instant, the public relations push was upended. Much of the media still covered “A Better Deal.” But cable news largely ignored it, choosing instead to chase the shiny new object presented before them by the president’s son-in-law.

The Daily Beast completely ignores the extensive documentation of Democrats actually spending the entirety of 2017 and most of 2018 talking about Russia themselves, which has been noted by many, with websites like Real Clear Politics, the Telegraph, Rasmussen and many, many more, calling them out on their “obsession” with Russia. The Daily Beast ignores how every major newspaper’s archives are full of Democratic politicians’ quotes regarding Russia! Russia! Russia!

The DNC recently made huge news and generated massive amounts of headlines by filing a lawsuit, about what? Yes, Russia.

They created the “Russia monster,” but now that polls are showing that while Democrats are obsessed by Russia, other voters are not, and it is turning voters away from them, and a majority even sees the Mueller Russia probe as being politically motivated, they are using the Daily Beast to cast blame on something else, the cable news industry.

The fact is Democrats wanted Russia to be the focus rather than admit they picked a candidate that was so flawed she could not win 270 electoral votes. The media wanted to blame Russia so they did not have to face the consequences of lying to their readers and convincing them that Hillary Clinton, their preferred candidate, was a shoe-in. The cable talking heads did the same thing, focused on Russia to avoid the responsibility for being so wrong throughout the entire 2016 campaign season about Donald Trump’s chances of winning. RINOs (Republican In Name Only) wanted to talk about Russia because they did everything in their power to circumvent voters in order to “select” a different candidate. NeverTrumpers gravitated to the Russia story to justify their own part in attempting to betray Republican voters that had made Trump the GOP nominee.

Now that it is backfiring, they want to change the topic. 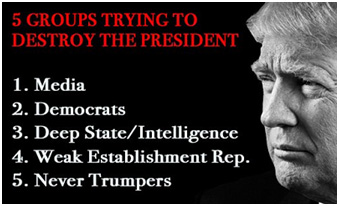 Another recurring theme over the last three days has been the steady stream of statements by Trump-haters, Trump-bashing comedians, Democratic politicians, journalists and op-ed writers, ironically claiming that there is too much Trump-bashing, and too much focus on President Trump, and Americans have had enough.