The ‘Free Thinker’ Movement: It Is Definitely ‘A Thing’ Now

The ‘Free Thinker’ Movement: It Is Definitely ‘A Thing’ Now By Susan Duclos – All News PipeLine

When Kanye West  caused massive amounts of liberal heads to explode by complimenting conservative TPUSA Director Candace Owens, by telling her “I love the way Candace Owens thinks,” then going on to express his love for President Trump, I said we were perhaps witnessing the beginning of a movement.

Well, it is definitely a “thing” now. 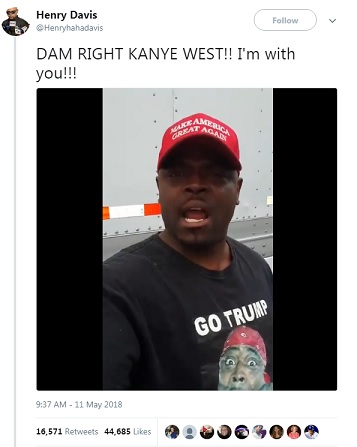 While liberal heads exploded all across the internet and celebrities attempted an intervention on Kanye, while politicians like Maxine Waters declared he was “talking out of turn,” and suggested he needed help thinking, because he was encouraging people to “think freely” and break out of their “mental prisons,” something else started happening, as exemplified in the image above, which we are starting to see more and more of from a number of different social media accounts.

Ignore the “Go Trump” shirt Mr. Henry Davis is wearing, shown in the image above, this has nothing to do with President Trump, although his commentary (LANGUAGE WARNING if you click his Twitter video link) is pro-Trump, because the focus of this article isn’t in who Kanye, Owens, Davis, and the hundreds of others I am seeing on social media, supports, but what they are saying, how they are breaking away from the Democratic “party line,” or as Ms. Owens calls it, the “Plantation,”  where everyone has to be 100% on-board with every single issue or they are being told to sit down and shut up.

Kanye catapulted Ms. Owens’ name into the social media of million upon millions of people that most likely never heard of her, many of which are black liberals, which now include some “former” black liberals, showing them that not all members of the black community have to think the same, hold the same opinion on each and every issue, specifically indicating that they did not have to adhere to the Democratic mindset just because of the color of their skin.

The Democratic party, liberals and their politicians, are not happy at all with the message these individuals are spreading, because while it may sound controversial for me to say this, the Democratic party quite literally believe they own the black community, which explains quite clearly why they are willing to attack any African American of prominence that does not toe their line and push their narrative and encourages others to be “free thinkers.” 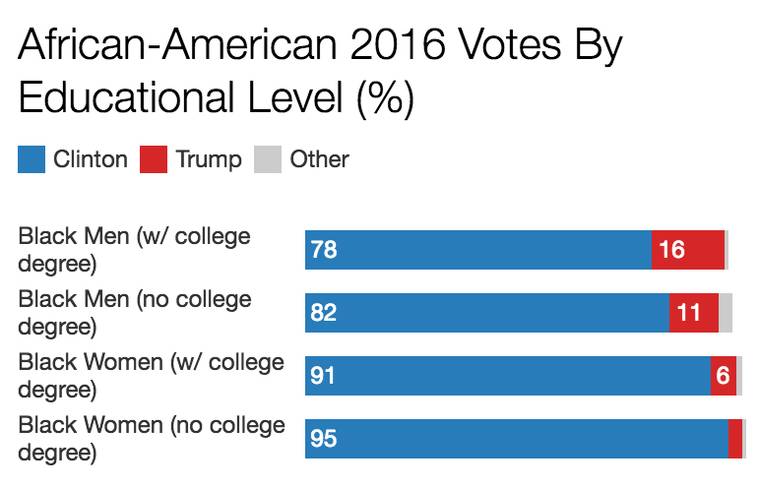 On the flip side of the coin, we have establishment-minded Republicans offering dire warnings about treating Kanye as a “hero,” because media claims he has become the hero of the “alt-right,” and rushing to warn people that Mr. West is not a conservative.

Questions: Who cares if Owens is a conservative or that Kanye West is not? Do the Republicans criticizing others for appreciating that the conversation has begun, not understand that those watching this play out do not have to agree with what Kanye thinks on individual issues, just that he is encouraging his brethren to just think for themselves?

Each and every one of us should be encouraging every one to do the same and absolutely no one should ever attempt to force others to “agree” with all of their ideological stances.

Those establishment Republicans are no better than the liberal Democrats that think they own the black community vote, a true conservative, or an Independent thinker, should never feel they are entitled to any demographic of voter, they are not. Asking people to think, research, listen to both sides of an argument or debate, before making up their mind, is the endgame, not insisting that someone should be ignored because they don’t toe the official “party line.”

As to the liberal media, Kayne’s exposing his tens of millions of followers to Candace Owens, followed up by President Trump highlighting Owens in a tweet,  meant that they thought it was their job to then attack Owens, claiming she defends “neo-nazis,”  in order to ruin her reputation, to which she is now threatening to sue them for, stating “Excuse me, @JamilesLartey but when did I ever “defend neo-nazis”? I suggest the @guardian lawyer up ASAP. I will make suing for libel a sport, and your publication will be ground zero. This is not a game you will win.” 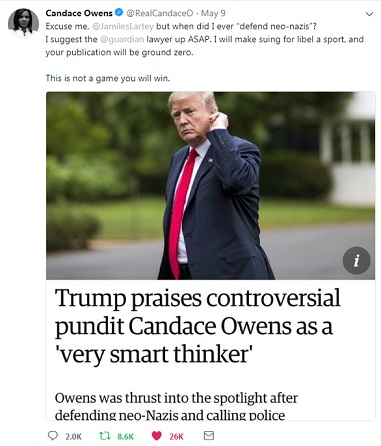 While liberals, the far-left media, Democrats, and some establishment Republicans, are busy attacking Owens and West, others all across the internet are running with the “free thinker” message they are spreading, to the point where other liberals are complainingabout seeing so much of it, with comments like “Its like everyones drinking the “free-thinker” kool-aid.”

I have been watching social media closely to see if this “free thinking” movement fizzles out or grows, and it is amazing how much it has grown in just a few short weeks, seeing more and more of the black community using the term “free thinker,” or “think freely” in their bios, and posting videos talking about “mental slavery,” and spreading the message.

The following video was shared  by Dark Kent with the message “I got my free thinking from Mom…  Here is my free thinker video of the day.”

Deplorable Melissa: “As a black woman I stand with Kanye West. The Democratic Party feeds black people a defeatist victim mentality that has stifled black progress. All so they can pose as our saviors to manipulate us into voting for policies that destroy us. #MAGA #FreeThinker #TheGreatAwakeing”