There has never been a more fiscally clueless team at the top than the Donald and his dimwitted Treasury secretary, Simple Steve Mnuchin. After reading the latter’s recent claim that financing Uncle Sam’s impending trillion dollar deficits will be a breeze, we now understand how he sat on the Board of Sears for 10-years and never noticed that the company was going bankrupt.

In any event, fixing to borrow upwards of $1.2 trillion in FY 2019, Simple Steve apparently didn’t get the memo about the Fed’s unfolding QT campaign and the fact that it will be draining cash from the bond pits at a $600 billion annual rate by October. After all, no one who can do third-grade math would expect that the bond market can “easily handle” what will in effect be $1.8 trillion of homeless USTs:

“U.S. Treasury Secretary Steven Mnuchin said he’s unconcerned about the bond market’s ability to absorb rising government debt after his department said it borrowed a record amount for the first quarter. ‘It’s a very large, robust market — it’s the most liquid market in the world, and there is a lot of supply,” he said… ‘But I think the market can easily handle it.’

Then again, Simple Steve is apparently not alone in his fog of incomprehension. Even if you did get the memo—like most of the Wall Street day traders—you might still be under the delusion that the Fed is your friend and that when push comes to shove, it will put QT on ice in order to forestall any unpleasant hissy-fitting in the casino.

That is, it’s allegedly still safe to buy the dips or play the swing trade between the 50-DMA and 200-DMA because the Powell Put undergirds the latter. So never fear dear punters: At about 2615 on the S&P 500 (the current 200-DMA), the Eccles Building cavalry will ride to the rescue.

That would appear to be the meaning of the chart below—except it isn’t. What it really says is that after nine years of buying the dips successfully, Wall Street has essentially deputized its own cavalry.

Accordingly, for the last two years the 200-DMA has held—but the buying spurts have been entirely faith-based, not Fed enabled. Well, except in the passive sense that open-mouth policy in the form of benign “forward  guidance” and a tepid pace of rate increases have mis-directed—even euthanized—the Wall Street punters (as possibly intended).

But QT and the huge cash drain in the bond pits is really where it’s at. And if Simple Steve doesn’t know it, the day traders and robo-machines are now simply choosing to ignore it—until they can’t.

To the contrary, there is in our judgment 15-20% of downside before the Fed relents, but by that point it will be too late.

To wit, when the Powell Put fails to appear as expected, the casino will have its Wile E. Coyote moment. And at that point there will be nothing to stop the doomsday machine of ETFs/vol shorts/risk parity trades/levered bond funds/CTA trend followers and combustible bespoke gambles from plunging off the high cliffs of Bubble Finance. 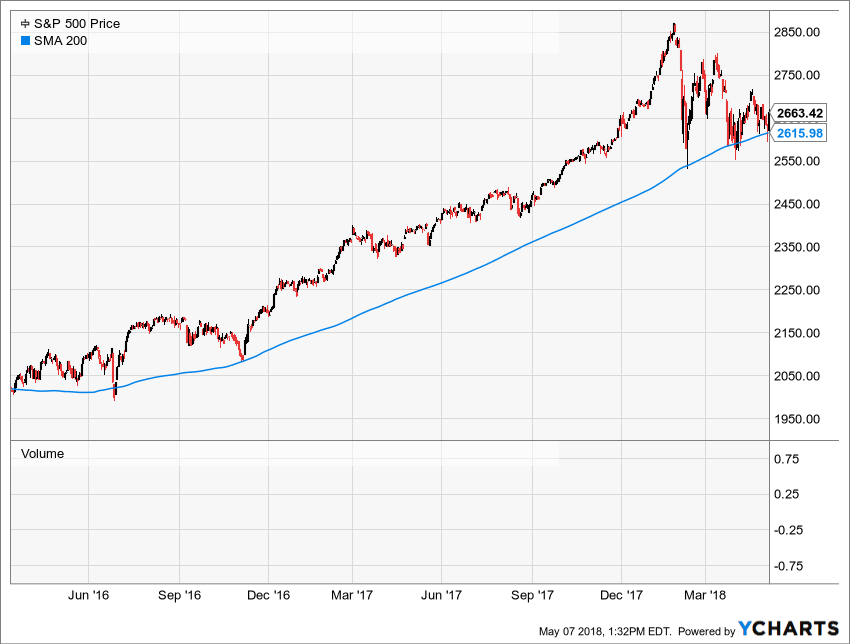 You could call it a perfect storm. Simple Steve and the Donald are completely clueless about the fiscal monster they have unleashed, while the arrogant overlords of the central bank truly believe they have bestowed the main street economy with ox-like strength and self-fueling forward momentum.

Accordingly, QT is not “data dependent” and is viewed by Powell and his posse as operating on auto-pilot. They are, in fact, not even mentioning it any longer in their post-meeting commentary.

As is clear from the chart, however, the great shrink is happening. And the $70 billion shown here is just the UST side of the bond dumping campaign. There is another 40% share of the shrinkage coming from the run-off of what was once the Fed’s $1.8 trillion GSE portfolio, as well.