Whether you believe that Donald Trump is a great president or the closest thing to a Manchurian candidate the U.S. has ever seen, there is one truth about Mr. Trump that no one can deny: he’s unpredictable and volatile.

That only matters to our corner of the speculating world because Trump-induced volatility is now a permanent state of affairs that will have real consequences for all markets.

Take oil. The black gold surged to a three-year high of $75.47 on April 24, 2018 after Trump threatened that Iran would have “big problems, bigger than they’ve ever had before, and you can mark it down.”

The comment was made at a photo op with French President Macron and was made when asked what would happen if Iran restarted its nuclear program.

By the end of the day — after meeting with President Macron — oil was at session lows after Trump said the United States and France could reach an agreement to preserve the Iran nuclear deal “fairly quickly.”

While Trump and his administration toy back and forth with revisiting the Trans-Pacific Partnership (TPP) as a negotiation tactic, China is busy calling his bluff.

China is in the midst of the largest infrastructure initiative in human history.

The Belt and Road Initiative (BRI) is a transportation and energy infrastructure construction program that was launched in 2013 and is not scheduled to be complete until 2049.

It’s an aggressive and very tangible way for China to flex its geopolitical and economic muscles.

Details of the project include the Silk Road Economic Belt, a land transportation route running from China to Southern Europe via Central Asia and the Middle East, and the 21st Century Maritime Silk Road, a sea route connecting the port of Shanghai to Venice, Italy via India and Africa. 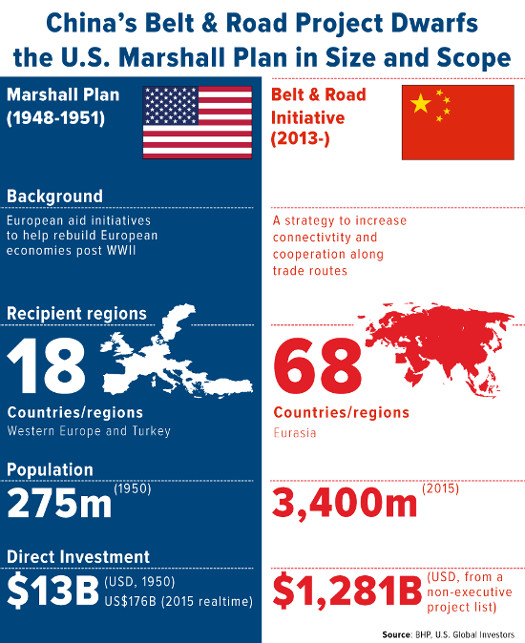 The project will build hundreds of mega-projects. Everything from highways, to railroads, energy grids, ports, airports, and pipelines.

The plan would facilitate trade from Asia to Europe and East Africa. It would include more than 40 nations.

The plan will require astronomical amounts of commodities. Copper, concrete, aluminum… I could go on, but you get the picture.

Total spending has been estimated to cost between $4 trillion and $8 trillion, or up to 12 times more than the U.S. Marshall Plan.

If you’re interested in further details — including the environmental concerns of the plan — you can find an excellent article here.

In the interest of balance, there are many skeptics of the viability of the massive undertaking because it simply has never been done.

You can find an excellent summary of the doubters here.

The bottom line is, from Gigafactories in the U.S. and Europe to BRI to aging infrastructure globally, commodities are entering a truly once-in-a-generation cycle that will make fortunes for those able to position correctly.

Whether you buy blue chips like Caterpillar or my favorite, the junior explorers and developers looking for and developing the actual commodity, make sure you establish a position you are comfortable with and then let the trend be your friend.