In recent years US imperial strategy has sought to lessen the cost of defeating and overthrowing independent countries.

The means and method are fairly straight forward. World-wide propaganda campaigns which demonize the adversary; the enlistment and collaboration of European and regional allies (England, France, Saudi Arabia and Israel); the recruitment, contracting, training and arming of local and overseas mercenaries dubbed “rebels”, or ‘democrats’; economic sanctions to provoke domestic social tensions and political instability of the government; proposals to negotiate a settlement; negotiations which demand non-reciprocal concessions and which include changes in strategic weapons in exchange for promises to end sanctions, diplomatic recognition and peaceful co-existence.

The strategic goal is disarmament in order to facilitate military and political intervention leading up to and beyond defeat, occupation, regime change; the impositions of a‘client regime’ to facilitate the pillage of economic resources and the securing of military bases, international alignment with the US empire and a military springboard for further conquests against neighbors and independent adversaries.

We will apply this model to recent and current examples of US tactical and strategic empire building in diverse regions, especially focusing on North Africa (Libya), the Middle East (Iraq, Palestine, Syria and Iran), Asia (North Korea), and Latin America (FARC in Colombia).

After several decades of failed efforts to overthrow the popular Libyan government of Muammar Gaddafi via local tribal and monarchist armed terrorists, and international economic sanctions , the US proposed a policy of negotiations and accommodation. 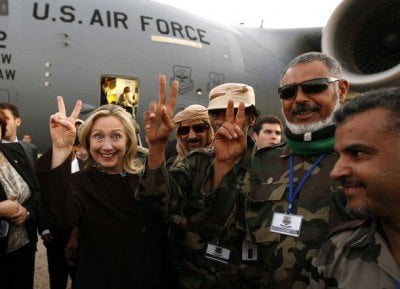 The US opened negotiations to end sanctions, offered diplomatic recognition and acceptance in the ‘international community’, in exchange for Gaddafi’s demobilization and abandonment of Libya’s strategic arms including its long-range ballistic missiles and other effective deterrents. The US did not reduce its military bases, ready and alert , targeting Tripoli.

In 2003 Gaddafi signed off on the agreement with the George W. Bush regime. Major US Libyan oil agreements and diplomatic accords were signed. US security adviser Condoleezza Rice visited President Gaddafi as a symbol of peace and friendship, even as US military aid was channeled to armed US clients.

In February 2011 the US led by President Obama and Secretary of State Hillary Clinton joined with their EU allies (France, UK . . .) and bombed Libya – its infrastructure, ports, transport centers, oil facilities, hospitals and schools… US and EU backed terrorists seized control of the major cities, and captured, tortured and murdered President Gaddafi. Over 2 million immigrant workers were forced to flee to Europe and the Middle East or return to central Africa.

Iraq under Saddam Hussein received arms and support from Washington to attack and invade Iran. This de facto agreement, encourage the Iraqi leader to assume that collaboration between nationalist Iraq and imperial Washington reflected a shared common agenda. Subsequently Baghdad believed that they had tacit US support in a territorial dispute with Kuwait. When Saddam invaded, the US bombed, devastated, invaded, occupied and partitioned Iraq.

The US backed the Kurds territorial seizure in the North and imposed a no-fly zone. Subsequently, President William Clinton engaged in several bombing attacks which failed to dislodge Saddam Hussein.