While Microsoft founder and vaccine propagandist Bill Gates recently warned that the next deadly flu epidemic is just waiting around the corner and it could quickly lead to the deaths of more than 30 million people, we’re not the least bit surprised that he also claims a ‘universal flu shot’ is the answer to prevent such a deadly pandemic, this despite the fact that even medical experts claimed that this year’s flu shot was hardly a preventive and actually led to the spread of the flu.

With the Bill and Melinda Gates Foundation teaming up with Google co-founder Larry Page to launch the ‘Grand Challenge’ of what they call the ‘holy grail  of influenza research‘, an attempt to develop a ‘universal vaccine‘, Gates and Page are giving out individual grants of between $250,000 and $2 million over 2 years to those attempting to develop such a universal flu shot with human testing set to begin by 2021.

Calling upon computational biology, bioinformatics, artificial intelligence, machine learning and other new technologies to be used as aids in the ongoing research, Gates and Page hope to ‘bridge the funding‘ of such projects due to what they call the “valley of death” between novel concepts and clinical trial-ready products. 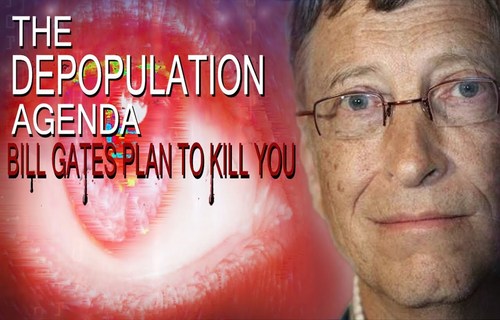 And while like many globalists, Gates and Page sound ‘sincere’ in their goals to prevent the spread of an epidemic that could cull tens of millions of lives, we must always remember that Gates and the Gates Foundation are also proponents of eugenics with Gates himself coming out directly and stated the world is far too overpopulated as heard directly from him in the 2nd video below while his father, William H Gates Sr., was a former board member of ‘Planned Parenthood’.

Bill Gates has doubled down on his goal to depopulate the planet, using deceitful Orwellian doublespeak in a new video to bamboozle his naive followers into believing that “by making people healthier, we can reduce the world’s population”.

Make no mistake, when Gates talks about “making people healthier” what he is really talking about is enforcing the mandatory roll out of his range of experimental vaccinations. The same vaccines that have already caused mass sterilization and death on multiple continents.

The second-richest man on the planet is a committed globalist and eugenicist working towards the New World Order goal of depopulation. Lest anyone forget these facts, Bill Gates regularly goes out of his way to remind us of them.

Bill Gates and his foundation have consistently come under fire for their goal of depopulation, and now the same man who admitted in a TED talk that his goal is to eliminate a billion humans from the face of the Earth has now taken to Facebook to lecture us about why being eradicated is in our own interests.

And while the website Deagel.com has recently made some very mysterious changes to their 2025 forecast for America as we report in much more detail below, as we hear in the final video below from the Leak Project and read in this March story from The Sun, one medical health expert is warning of a mutant virus that sounds straight from a science fiction movie, potentiall becoming the fastest-spreading viral killer known to the human race and as he tels us, such a killer virus outbreak could happen tomorrow.

Dr Jonathan Quick, chair of the Global Health Council, said the flu virus is “the most diabolical, hardest-to-control, and fastest-spreading potential viral killer known to humankind”.

Describing what sounds like scenes from a horror film, Dr Quick warned in The Daily Mail of starvation, medicine supplies running low, energy systems crippling under the pressure and the collapse of the global economy.

And what’s could cause such devastation, on a global scale?

“The most likely culprit will be a new and unprecedentedly deadly mutation of the influenza virus. The conditions are right, it could happen tomorrow.”

And while the website Deagel.com is STILL forecasting a massive depopulation for America by 2025, on our visit to their website this morning we found a huge difference in their 2025 forecast from just weeks ago.

As we had reported on ANP back on December 31st of 2017, Deagel was previously forecasting the US population to drop to 54 million people by 2025, down from what was then 324 million people in 2016. Well as we see now in the screenshot above taken from their website page for the United States this morning, Deagel is now forecasting that the 2025 population of the USA will be a nice, round 100 million people – nearly doubling their previous 2025 forecast for America of 54 million.