Average People Presenting Evidence That America Is Under Attack

I allege that Washington DC is going to be destroyed and the cpaital will be moved to Denver. Before this occurs, the resistance to the coup that will takeover America, must be eliminated thorugh an EMP attack. I have previously detailed how the UN, using its foreign troops, already embedded in several locations in the United States will be involved in this coup.

I am beginning to see some of my colleagues coming to the same conclusions as I have. Most interestingly, everyday people are seeing it as well and they are sending me their stories and evidence.

There is no doubt in my mind that Deep State and its allies with the UN are close to intiating a coup to sto pthe prosecutions of their top minions.

In this article, I am going to let other journalists present their side of things. The conclusion is still the same, America, prepare to defend yourself.

On April 21st, 2018, on Alex Jones Infowars channel titled, “Exclusive! CIA Warns Of Massive Terror Attacks Targeting The US,” In Alex’s presentation made on his 4/21 show, he gives credit to his source,  a CIA operative, has a great track record. Jones stated that the Deep State is prepared to attack, via terrorist mode, in the U.S. in order to dismantle the Trump administration.

I have an ARSOF source that has told me numerous times over the past six weeks that these coming attacks, both chemcial and EMP, are designed to derail the coming prosecutions of  Comey, Clinton, Lynch, McCabe, Strzok and Page.

My friend and colleague, Lisa Haven, has stumbled upon addditional information that would seem to indicate that the coming EMP attacks are going to be national, in scope, and extend far beyond what I have demonstrated in the past 48 hours with regard to the clear intention of the United Nations to bring the grid in Colorado prior to the takeover and establishing Denver as the new capital.

All this happens as the Wisconsin National Guard prepares for their full-scale training exercise known as Dark Sky, a drill that will prepare for a possible long-term mass power outage. The drill is scheduled for May 15-17 in multiple counties.

But do these two events have anything in common? All that and more below…

Question: How many times have we seen a SNAP drill go live and the drill becomes reality? Please allow me to partially jog your memory. There was the Boston Marathon Bombing, the London Subway Bombing and of course the King of them all, 911.

I have previously received information on foreign broadcasts going out over the air, late at night, in which it appeared that foreign troop movementss were being broadcast, or directed. The last one was from the Sacramento area and the broadcast was in Chinese. I purposely held this information close to the vest because I was certain these events had national security implications and I turned the inforation over to trusted sources. I turned the information over to some of my best sources. These sources have confirmed for me that these broadcasts are coded updates designed for troops in the field and foreign operatives embedded in public utilities and other governmental entities. Yes, I am speaking about sleeper agents and sleeper cells. I will not reveal the contents of the two previous reports becuase it could compromise a source. However, there is another report of the same phenomena in Central Oregon.

This is the third report of this type that I have received since January of 2018.

I have spent years detailing foreign troop presence, mostly Russian, in Northern Colorado and Southern Wyoming. Yesterday, I published a set of stunning photos from Aurora, Colorado, a suburb of Denver, which were of UN EMP proof communications equipment. The implications are clear, the UN proxies have made a deliberate decision to initiate a coup.

Today, I have come across information that speaks to a growing and reclusive Russian community that is growing in the Denver area. They even have their own publications which were sent to me by a reader. Over the past year,  I have spoken to members fo the Denver Policie Department and they fear these people. Their feeling is that these people go beyond the protypical Russian mafia. The officers I spoke with is that they look like and act like military units. Here are the Russian publications localized to Denver. 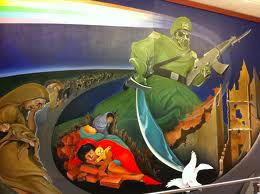 Was this coming moment foretold on the mural at Denver International Airport near baggage pick-up? I took this picute after traveling to Denver to visit family. Shortly after thes pictures went viral in 2011, they were removed from the mural adjacent to baggage pick-up. This picture speaks volumes upon closer examination.

I have reported many times that Denver International Airport is the creation of the New World Order. In fact, in the airport, they even have a plaque to that effect that aired on Jesse Ventura’s former show, Conspiracy Theory.

In the 2011 exercise known as Operation Mountain Guardian, the authorities shut down the airport and flew in dignatiaries to disappear for three days. Among the dignataries was President Obama. One of the major purposes of the drill was to simulate the passing of the mantle of national power from Washington DC to Denver.

Over the years, I have learned that an entire city exists below DIA. The city goes as deep as two miles and railways connect the area to several key points across the country, including NORAD in Colorado Springs. Here is a recent account of the mysterious DIA from someone who has been there.

Hello Dave, I have a first hand story about the airport in Denver.
I was working at that time at Squaw Peak Water Treatment Plant.

We were undergoing a “retrofit” upgrade of our Plant and filtration system.
Sundt/Eby…had won the 40 million dollar bid…

They’d put up their Trailers as they were there on our 80 acre plant for several years…the operators (I was first female ever hired as water treatment operator for the city of phoenix.) …Naturally had to mingle with their workers and we got to know them pretty well.

True story /…one morning some of their fellows I’d gotten to know began telling me this story. They had ,previous to their current job at squawpeak , been working in Denver at the new airport. They told me of how far it was outside city and reason why

They told me it is basically a decoy.
That it had 4 levels…and  semi trucks….could be driven thru the underground levels.
They said that the workers were told NOT to discuss what they saw or witnessed and that there was an aura of evil in the air.
They said workers would be let go and sent to another job site when they had completed a project so that they would not be able to put the puzzle pieces together…so they wouldn’t be able grasp “the big picture “

They told me that (I believe it was the lower level #4)….best I can recollect. ..had GAS hookups…where a semi load (of people ) could be backed up to the Gas hook ups and ADIOS….they’d then be dumped into another section….

These fellows were Christians and we’d gotten to know each other…they were SCARED even to be speaking of the things they saw!!!!!!
I remember still that even I got chills at that time…Very Masonic Very diabolical Very Evil…Anyway…thought you might want to know those things…all true.
Kathy

I just interviewed Paul Martin, and the interview will be posted on The Common Sense Show’s website. Paul names his high level  sources that allege that the Chinese have been flooding into Huntsville, Alabama for the past few years.
Additionally, I have received more photos of UN EMP proof communcations equipment located in Austin, Tx.
People can bury their heads in the sand, however, this all adds up the unmistakable conclusion that we are being invaded adn most of us are too blind see what is happening and will remain so until it is too late. Look at the Deagel report that I published in the last article in which it is cearly stated that American will soon be no more and 90% of us will be left dead.
More at The Common Sense Show>>>