2018’s ‘Short’ of the Year by Michael Ballanger – GoldSeek 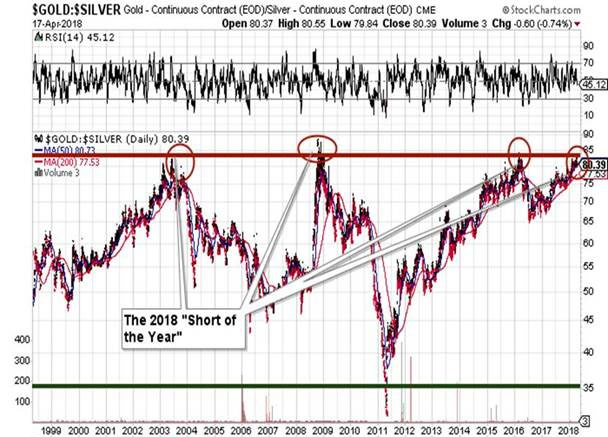 There is a famous quote about short-selling that comes from Olde English business folklore that goes something like this:

“He who sells what isn’t his’n.
Must deliver or goes to prison!”

That old horse chestnut was used to frighten the Rothchildian short-sellers that used to hang out on the old New York “curb” back before governments and influence- peddling lobbyists conspired to change the rules. I used to love to find overvalued stocks or commodities and get our trading desk to call over to the loan post to see what it would cost to borrow a few thousand shares of some pumped up bowser of a stock and then attempt to catch it on an uptick in order to sell it. The entire concept was rather civilized because everyone would know that there was a highly visible bear out there trying to get short something and invariably, the principals like the CEO or CFO would find out and then the ancient game of cat-and-mouse would begin.

It would begin with the phone calls from someone at the target company introducing themselves and asking you out for coffee or a beer if you were borrowing a puny 2,000 shares with the venue morphing decidedly if the number was north of 100,000 shares. (If it was a MILLION, it was a weekend in Vegas.) I would put on my most gracious persona as the rep from the overvalued company tried in vain to change my intention of hammering his pig of a stock into the ground, but what made it a study in human behavior was that the higher the gratuity, the more maniacally I wanted to sell the stock.

Needless to say, short-selling is not the fun it used to be because everyone and their uncle are “hip” to the notion of shorting overvalued garbage thanks to terrific books and movies like “The Big Short” that really showed the world how extremely difficult it can be and how the market-makers can artificially create a squeeze on a short player by simply fiddling with the “marks” at the end of every month. I, for one, long for the old days of finding some piece of Vancouver garbage that had a $500,000 annual travel and entertainment budget and a $500 annual exploration budget and a property “next door to Friedland” (!) whose founders held all the one-cent stock that was coming out of escrow next week. Adding insult to injury and turning the ridiculous to the sublime, the CEO has just paid out an egregious amount of money and stock to the telephone room owners whose job it was to “pump up the volume.” Alas, the Elon Musks of the world learned how to magnificently “manage” their stocks by way of social media and sweetheart deals with all the top 50 hedge fund managers that conspire daily to monitor the share price so that nothing “untoward” can ever happen to threaten the uptrend line, despite being the most over-priced, money-losing auto manufacturer in world history.

The same thing goes for gold and silver with massive quantities of paper gold being traded as if in a virtual reality pit of digital outcry. To say that being long the gold and silver markets since 2013 has been “interesting” is like saying that having root canal surgery without Novocain is “interesting,” when we both know that the proper descriptive should be “agony” or “maddening” but one adjective to most-accurately describe these past five years of shenanigans is “costly” for many people and for all the wrong reasons. Banks cannot sanction gold or silver because there is no counterparty to the transaction. Once it leaves the bank, it is gone.

I have one idea for all of you that is, in my humble opinion, one of the greatest “short” set-ups that I have seen in over 40 years trading markets. Because I am leery of interventions and manipulations carried out constantly under the blinded eyes of regulators, I need to short something that would not be exposed to directional risk. The best example of being right about something and wrong at the same time was mid-2017 when I took one look at Bitcoin and determined that it was a bubble of the highest order. That was at $10,000 per coin. It went to $19,891 and then got bombed to under $7,000 and had we shorted it in mid-year, we still would have made money but had we shorted it on December 19, we would have made a fortune. What I knew from my short-selling experiences on the Nikkei in the late 1980s was that the most difficult part of shorting is execution (TIMING) because the biggest move on a chart comes in the last 10% of its journey along the x-axis. (Classic “bubble” chart pattern).