Is ‘Caravan Invasion’ An Act Of War Upon America?

Is ‘Caravan Invasion’ An Act Of War Upon America? ‘Unarmed Invasions’ Are The ‘Grand Strategy’ Of Covert Warfare By Stefan Stanford – All News Pipeline

While President Trump recently claimed that the ‘caravan’ of thousands of migrants walking through Mexico and headed towards America means “the US is being stolen”, it wasn’t lost upon some that a huge number of the mostly Honduran group travelling through Mexico are men, just as we witnessed in Europe with mostly fighting age men pouring in from Syria.

With President Trump once again going on the offensive on illegal immigration, warning that Congress must act to put a stop to it here in America, Tap Wires reports the caravan of illegal migrants marching upon the US border looks more like an army of young male invaders in what their story calls ‘an act of war upon America‘.

And now we learn in this brand new story from the Daily Caller which the Drudge Report just linked to that President Trump is sending the US military to our southern border, possibly until the wall is built as heard in the 2nd video below.

As the Tap Wires story also reports, the ‘neo-Communist’ group that is leading this march, Pueblos Sin Fronteras, is a front group for the Communist International and purports to be an anti-border group but in reality is a tool of Soros and Open Society foundation global governance organization pushing for a borderless world and global government.

Should we be surprised that Soros is somehow connected? As we see outlined in much more detail below in new and old stories from former US Presidential Candidate Dr. Alan Keyes, ‘illegal immigration’ is absolutely part of a strategy of ‘unarmed invasion’ that has been used throughout history in covert warfare to overthrow nations. First, from this Guardian story:

“Mexico has the absolute power not to let these large ‘Caravans’ of people enter their country,” President Trump tweeted. “They must stop them at their Northern Border, which they can do because their border laws work, not allow them to pass through into our country, which has no effective border laws.

“Congress must immediately pass Border Legislation, use Nuclear Option if necessary, to stop the massive inflow of Drugs and People. Border Patrol Agents (and ICE) are GREAT, but the weak Dem laws don’t allow them to do their job. Act now Congress, our country is being stolen!

Trump’s use of the term “caravans” – also made in a sequence of tweets on Easter Sunday – was a reference to a large group of people who are heading through Mexico, hoping to reach the US border.

With large parts of Mexico turned into a war zone as Borderland Beat reports in this story which warns that bodies are burning on busy streets in Acapulco as drug-war fueled violence explodes in our southern neighbor, their reports that 4 people were executed while 6 vehicles were set on fire in Acapulco in a day were brushed off as just more standard, every day news as people there become accustomed to the violence and the chaos.

And while we absolutely feel for those who have no choice but to leave war torn countries such as Honduras, trying to seek out a better life for their families, as the disaster called ‘California’ proves to us, America can’t be ‘the answer‘ for everybody.

As Dr. Alan Keyes asks us in this new story over at Sovereign Nations, with Mexico quite literally helping the mass of illegals invade America, what can be done? Dr. Keys story references this 2010 story he also wrote over at his ‘Loyal to Liberty’ blog titled “The Green March – Illegal Immigration and the Strategy of Unarmed Invasion”. Keep in mind, this was written back in 2010. From Dr. Keys.:

Throughout history one of the key aims in warfare has been the successful implementation of a covert attack. Hannibal defeated and destroyed several Roman armies thanks to his masterful orchestration of battles that made his opponent the victim of such an attack. What he taught at the strategic level, the Romans mastered at the level of Grand Strategy, positioning themselves for the conquest of vast territories under the guise of interventions that seemed innocuous or even helpful to those they intended to dominate.

They invaded and established strongholds of power in the midst of their intended victims camouflaged by declared purposes and intentions that concealed their strategic effect. Often it was only revealed when they exercised the domination it made possible. Their victims slumbered in the delusion of liberty, until the suave accents of diplomacy or arbitration gave way to the curt voice of arrogant command that signified its ruin.

Is this now to be the fate of the USA? In my latest WND.com article I characterized the reality of illegal immigration as a foreign invasion. I pointed out that the U.S. Constitution does not require U.S. government authorization before the government of one of the United States responds to an actual foreign invasion. I knew when I wrote it that some people would take exception to the notion that the peaceful mobilization of unarmed civilians can reasonably be called an invasion. They want to dismiss such language as inflammatory rhetoric and hyperbole. 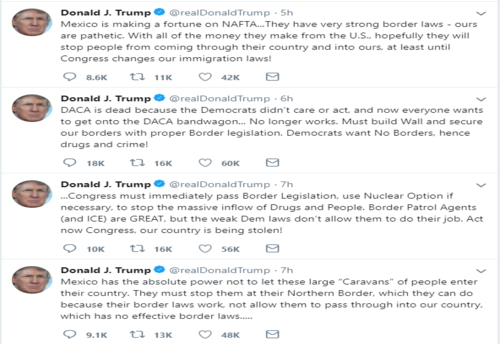 With President Trump going on a ‘twitter storm’ today over immigration as seen in his recent tweets screenshot above and below, will this ‘caravan’ marching towards America be the impetus that is needed to get Congress to finally take action?

With President Trump also saying that DACA is now dead because the ‘demon-rats’ didn’t care nor act while claiming they want NO borders, President Trump is right on the money when he warns no borders will continue to bring drugs and crime to America.