As Media Mocks The Most Holy Of Days, Let Us Pay Tribute: ‘He Is Risen’

As Media Mocks The Most Holy Of Days, Let Us Pay Tribute: ‘He Is Risen’ – Happy Resurrection Day – By Susan Duclos – All News PipeLine

As millions upon millions of people around the world celebrate Resurrection Day, popularly known as Easter Sunday, online and off, celebrating with family at home, or with online friends in trending hashtags like #ResurrectionSunday,  Happy Easter, #EasterSunday, we also note a number of liberal media outlets and pundits attempting to diminish the importance of religious holidays.

NPR, National Public Radio, an outlet that receives federal funding, inaccurately described “Easter” as “the day celebrating the idea that Jesus did not die and go to hell or purgatory or anywhere at all but rather arose into heaven.” They later updated the article, replacing that quote with “Easter — the day Christians celebrate Jesus’ Resurrection — is on Sunday,”  offering a note about the correction at the bottom of their article.

CNN headlines with “How Easter became a #MeToo moment.” (Not linking to that idiocy, but it is discussed by RedState here)

Todd was taken to task by many, with one user telling him “The day of Jesus’ crucifixion is considered a victory of Good over Evil, Chuck. Your ignorant and insensitive comment should get you fired. Every Christian is offended by your derogatory & pejorative lack of respect on this holy day. You should repent & then pray for forgiveness.”

Another asserted “No Chuck. On our very VERY best day, we cant make a Friday “Good Friday” Like Jesus did. Diminish it all you want. He suffered immensely for our sin on this day so that we can commune with God. Maybe no big deal to you, but HUGE deal to many of us. Maybe one day you’ll get it.”

While there were a number of users taking him to task, some of which can be seen at the Daily Caller article about this, and more can be seen on the Twitter thread, this last example here, speaks to the reason why so many liberal media pundits and outlets do this type of thing, whether on Resurrection Day or Christmas, when the user stated “I mean no disrespect” is a classic phase often used to diminish and mock. The left has been mocking and attempting to diminish faith for decades. A little selflessness on your part would include not speaking out against Good Friday by likening it to any other day.”

Emphasis mine because despite the Daily Caller giving Todd the benefit of the doubt by saying his comment was made because “NBC’s Chuck Todd Doesn’t Understand Good Friday,” or saying the same about NPR by headlining “NPR Doesn’t Know What EasterIs,” those liberal pundits know  that  Easter aka Resurrection Day, is the celebration of the resurrection of Jesus and that Good Friday is a day that commemorates the Crucifixion of Jesus Christ.

These are writers and reporters, so one would assume they are familiar with a little known invention called a “search engine,” in the event they do not understand a topic, and if they have no desire to actually use one in order to accurately describe something, perhaps they shouldn’t be writing about it at all.

That is, of course, if one believes they truly are ignorant of these religious commemorations or celebrations and the meaning behind them, rather than doing what the last quoted Twitter user accused them of, which is the liberal habit of “mocking and attempting to diminish faith,” especially the Christian faith. 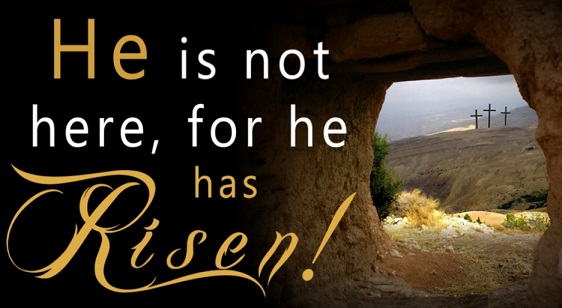 So, as the liberal media outlets attempt to mock and diminish the most important of Christian celebrations, let it be the Independent Media that pays tribute to Resurrection Day, with Matthew 28, KJV.

In the end of the sabbath, as it began to dawn toward the first day of the week, came Mary Magdalene and the other Mary to see the sepulchre.

2 And, behold, there was a great earthquake: for the angel of the Lord descended from heaven, and came and rolled back the stone from the door, and sat upon it.

3 His countenance was like lightning, and his raiment white as snow:

4 And for fear of him the keepers did shake, and became as dead men.

5 And the angel answered and said unto the women, Fear not ye: for I know that ye seek Jesus, which was crucified.

6 He is not here: for he is risen, as he said. Come, see the place where the Lord lay.

7 And go quickly, and tell his disciples that he is risen from the dead; and, behold, he goeth before you into Galilee; there shall ye see him: lo, I have told you.

8 And they departed quickly from the sepulchre with fear and great joy; and did run to bring his disciples word.

9 And as they went to tell his disciples, behold, Jesus met them, saying, All hail. And they came and held him by the feet, and worshipped him.

10 Then said Jesus unto them, Be not afraid: go tell my brethren that they go into Galilee, and there shall they see me.

11 Now when they were going, behold, some of the watch came into the city, and shewed unto the chief priests all the things that were done.

12 And when they were assembled with the elders, and had taken counsel, they gave large money unto the soldiers,

13 Saying, Say ye, His disciples came by night, and stole him away while we slept.

14 And if this come to the governor’s ears, we will persuade him, and secure you.

15 So they took the money, and did as they were taught: and this saying is commonly reported among the Jews until this day.

16 Then the eleven disciples went away into Galilee, into a mountain where Jesus had appointed them.

17 And when they saw him, they worshipped him: but some doubted.

18 And Jesus came and spake unto them, saying, All power is given unto me in heaven and in earth.

19 Go ye therefore, and teach all nations, baptizing them in the name of the Father, and of the Son, and of the Holy Ghost:

20 Teaching them to observe all things whatsoever I have commanded you: and, lo, I am with you always, even unto the end of the world. Amen.

Happy Resurrection Day PipeLiners. Rejoice, for He is risen.

TDC Note – The song below is one that I listen to everyday – it is one of the layers of God’s armor that fortify’s my life on a daily basis.