FRA: Hi, welcome to FRA Roundtable Insight .. Today we have Charles Hugh Smith. Author, leading global finance blogger and philosopher. Americas philosopher, we call him. Hes the author of nine books on our economy and society including A radically beneficial world: Automation, technology and creating jobs for all, Resistance, Revolution, Liberation: A Model for positive change, and the Nearly free university and emerging economy. His blog www.oftwominds.com has logged over 55 million-page views and is number 7 on CNBC top alternative finance sites. Welcome Charles.

FRA: Yeah and today I thought with talk about the challenges of work employment and the prospects of what’s been proposed recently by many of the developed countries; indebted developed countries that that and that is namely on universal basic income and you’re graciously provided some Charts to help lead the the discussion as well on them.

FRA: Yeah, and yeah. I mean a lot of people are worried about trends in the economy particularly what’s happening in the form of software automation, robotics process automation, artificial intelligence—the idea being that or maybe this is taking away jobs and what are we going to do for work your thoughts on that and if you can get some background on UBI (Universal Basic Income) is taking place.

Charles Hugh Smith: Right, right. Well that’s an excellent starting point Richard and um yeah let’s talk about the problems that people recognize and if they that they hope Universal basic income will solve and of course there’s two big problems. One is the replacement of human labor by automation and we see this I have a couple of charts here about the participation rate in the United States which is the number of working-age people who are on actually have jobs or earning wages in the economy and of course this has been declining and for men in particular we see it’s like a multi-decade trim down as the traditional economics that typically find employment in, such as construction and manufacturing as those are in decline and then male participation is declining even more significantly then then the total workforce in including female. So that’s definitely an issue, and then we have the other issue inequality of wealth and income and what we see is that for a variety of reasons our economy is becoming a haves and have nots and kind of used to call if there’s a phrase called winner-take-all and it’s not so much winner-take-all but it’s winner take most. In other words, the top tier of our society is reaping the vast majority of the economic gains and so I have some charts here to that show at like employment by age. The older people are continuing to work because they can’t afford to retire. While the number of middle-aged and younger people with jobs his has stagnated for decades and I have assets median of family assets chart year that shows that actually for the terms of the median wealth of the household it hasn’t really recovered from the Great Recession of 2008-9. 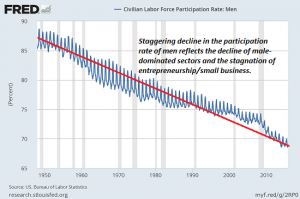 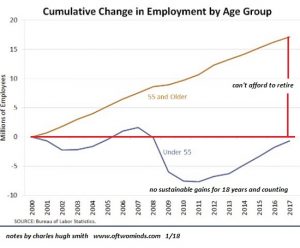 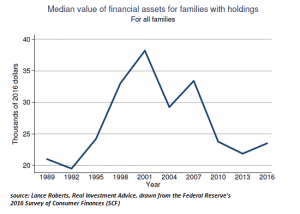 Now the top 5% and 1% and 1/10% and they’ve done extremely well you know in the last 9 years but if we look at the average—wealth is actually stagnated or declined and we see it here with this—this chart of the income of percentage of the bottom 50% of the top 1% and so the income of the bottom 50% of spending sliding for years while the income of the top 1% soaring and so we all have to recognize—yes these are two real problems and this is why universal basic income is such an attractive solution for pundits and the political class and the leadership because it seems to seems to offer a solution to both rising inequality and the stagnation of jobs. But that raises the question—okay let’s say that that UBI of everybody receiving $1,000 a month or whatever the sum is going to be. It’s going to solve all—both these problems where is the money going to come from and so you know we can kind of just do some very rough numbers and we say okay this is for adults only right we’re going to keep the programs for children in the elderly, this is for the working-age populist right we’re going to keep social security and Medicare for the elderly and we’re going to keep our child welfare and support programs for infants and children. So what we’re going to do is we’re going to add about a trillion and a half or possibly even two trillion dollars of additional expense and we’re not really going to be able to save much because the vast working population—it doesn’t really cost the government very much money at the moment, there’s Medicaid and then some unemployment expenses and so on but these are trivial amounts compared to this sums being spent on supporting the elderly and other government programs. So we’re really going to be adding a trillion and half existing spending and of course I have some charts here that show—in US national debt is on a tear, it’s like doubling and tripling every few years and it’s roughly 20 trillion right it used to be under 10 a few short years ago so where are we going to be able to get this money are we going to be able to borrow it? And the answer is well if we borrow it we’re really putting pressure on the system such that we could break it. 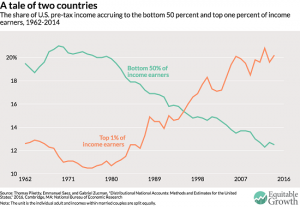 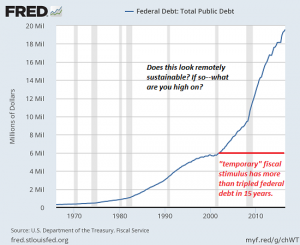 And I have a chart that of China’s debt and both private and state and it’s also soaring so in other words we need to be aware that this is a global problem. In other words China and Japan they’re also facing a huge demographic change where—their workforce is shrinking and their the populace of elderly and retired is soaring and that same is true of Europe. So globally this is a problem for every government that’s going to be supporting an expanding class of elderly and retirees and it’s and providing UBI—it  just doesn’t compute you know. 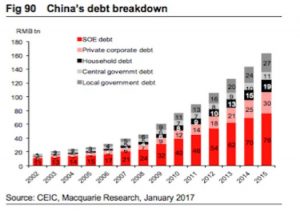 FRA: Yeah and I was just going to ask I mean—what is the actual basic proposition here is it everybody every citizen resident getting a certain amount like you mention like $1,000 a month or something like that how does that work what is their proposal?