Anyone that hasn’t been living under a rock already knows that social media platforms and big tech like Facebook, Twitter, Google, and YouTube have been censoring conservatives and Independent Media news, but over the past couple of weeks, other revelations have emerged which are, in a word, creepy.

Facebook: Last week news broke that more than 50 million Facebook users had their data harvested and sold to an outside group, which tanked Facebook stock, created a panic within Facebook itself, and caused the company some very negative coverage. Right on the heels of that, as Facebook CEO Mark Zuckerberg was making the rounds for interviews and taking out ads in newspapers to apologize, another scandal dropped on them when it was reported that Facebook was collecting metadata from about phone calls and text messages on Android devices, including names, phone numbers, and the length of each call made or received.

So they not only allow third party apps to harvest user data and data of those users’ friends list on their site, but users that signed on to Facebook using their Android devices, were also having their information scraped. 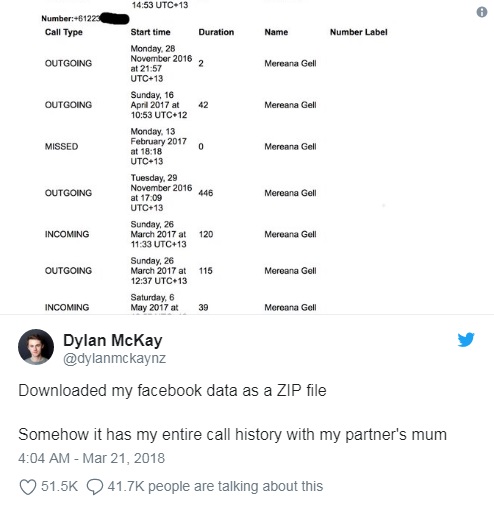 On March 25, 2018, Facebook responded to the multiple reports showing that when people started looking through the information that Facebook was collecting on them, they were distressed to find this level of data harvesting, by claiming this was an “opt-in feature,” to help “you find and stay connected with the people you care about, and provides you with a better experience across Facebook.”

When you sign up for Messenger or Facebook Lite on Android, or log into Messenger on an Android device, you are given the option to continuously upload your contacts as well as your call and text history. For Messenger, you can either turn it on, choose ‘learn more’ or ‘not now’. On Facebook Lite, the options are to turn it on or ‘skip’. If you chose to turn this feature on, we will begin to continuously log this information, which can be downloaded at any time using the Download Your Information tool.

That is directly contradicted by the Dylan McKay who put the screen shot shown above on his Twitter account, as he and others tell  arsTECHNICA that they never gave the app their permission to collect the metadata from his device or contact list.

This contradicts the experience of several users who shared their data with Ars. Dylan McKay told Ars that he installed Messenger in 2015, but only allowed the app the permissions in the Android manifest that were required for installation. He says he removed and reinistalled the app several times over the course of the next few years, but never explicitly gave the app permission to read his SMS records and call history. McKay’s call and SMS data runs through July of 2017.

In my case, a review of my Google Play data confirms that Messenger was never installed on the Android devices I used. Facebook was installed on a Nexus tablet I used and on the Blackphone 2 in 2015, and there was never an explicit message requesting access to phone call and SMS data. Yet there is call data from the end of 2015 until late 2016, when I reinstalled the operating system on the Blackphone 2 and wiped all applications.

While data collection was technically “opt-in,” in both these cases the opt-in was the default installation mode for Facebook’s application, not a separate notification of data collection. Facebook never explicitly revealed that the data was being collected, and it was only discovered as part of a review of the data associated with the accounts. The users we talked to only performed such reviews after the recent revelations about Cambridge Analytica’s use of Facebook data.