Susan Duclos – Message To Normal Women Across America: Feminism Is A Disease

According to Merriam-Webster, feminism is defined as – 1: the theory of the political, economic, and social equality of the sexes; 2: organized activity on behalf of women’s rights and interests. Cambridge Dictionary defines it as “the belief that women should be allowed the same rights, power, and opportunities as men and be treated in the same way, or the set of activities intended to achieve this state.”

After watching and documenting the antics of today’s so-called “feminists,”  over the past few years, I have come to the conclusion that what used to be a fight for “equal rights,” has become a disease where “victimhood,” and “male bashing,”  literally defines those that call themselves feminists.

THE VICTIMHOOD MENTALITY OF THE #METOO MOVEMENT

One of the prime examples of the disease of today’s wave of feminism comes from the so-called #MeToo movement, which started as a Twitter movement females used to say they had been sexually harassed, like Harvey Weinstein victims had been, but quickly morphed in a lynch mob mentality of screaming #MeToo if a man happened to “flirt,” in a fumbling manner, or sent a private message a woman thought was “creepy,” or any other number of things that had nothing to do with sexual harassment.

The women actually feel “empowered” by acting like all women are some type of “victims,” simply because they have a vagina.

Heaven forbid any man stand up for another that has been wrongfully accused, or accused without any type of evidence to prove the accusation, the #MeToo mob of verified Twitter users instantly gangs up to scream “enabler!” or “misogyny!,” in an attempt to silence any opinion that doesn’t feed the “women have vaginas, so they are all born victims,” mentality.

Make no mistake, there is a special place in hell for the Harvey Weinstein’s of this world, but that does not mean that everyone with a penis is automatically an abuser deserving scorn. Men should also not have to bite their tongues when unjustly attacked by a woman because of the fear of being labeled a misogynist. 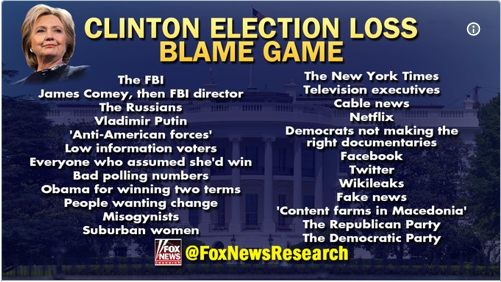 NO SWEETIE, HILLARY DIDN’T LOSE BECAUSE SHE WAS A WOMAN

On March 21, 2018, Jennifer Palmieri, former Director of Communications for Hillary Clinton’s 2016 presidential campaign, had a featured piece over at TIME, titled “Inside the Last Days of the Hillary Clinton Campaign,” providing an excerpt from her book. The entire excerpt exemplifies the very sickness that is called feminism today,  not predicated on just the last days of the Clinton campaign, but on how Hillary lost because she was a woman.

From the beginning to the end of Palmieri’s TIME piece she consistently blamed everything on gender bias, from the reactions to Clinton’s concession speech, which Palmieri thought went over well because “that’s what you think is acceptable for a woman to do — concede,” to her assertion that it wasn’t a coincidence that “the first woman nominee of a major party lost a presidential election to a misogynist?”

A quick reminder before we move along.

Misogynyst: hatred, dislike, or mistrust of women, or prejudice against women.