If Americans needed any more evidence that we’re witnessing a ‘manufactured event’ in Florida that is being used by satanic globalists in an attempt to complete their long-worked-towards ‘destruction of America’, including the takedown of our Constitution and specifically the 1st and 2nd Amendments, we get it in numerous new stories from all across the internet as detailed within this ANP story.

With what appears to us to be ‘a partnership made in hell’ between corrupt and treasonous factions of the ‘deep state’, Broward County law enforcement and ‘radical Islamic terrorists’ doing what they each do best (lying to the American people), we must remember that the Islamic principle of taqiyya ALLOWS Muslims to lie to either ‘smooth over differences’ or ‘gain the upper hand on their enemies’.

And when we remember that Barack Obama ‘switched sides in the war upon terrorism’ and ’embraced our Muslim enemies’, it all begins to make a bit more sense. Especially considering the fact that ‘the deep state’ has long permitted themselves to do things that the average American citizen would be locked away forever for, such as committing acts of terrorism upon US soil, and against US citizens, with the govt blaming such ‘real or perceived attacks’ upon other entities. 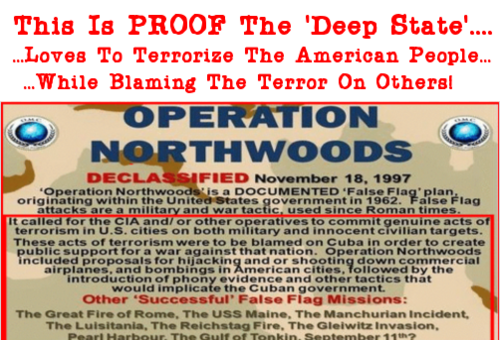 With Americans quite literally now facing ‘freedoms last stand’ as ‘enemies of America within’ the Democratic party prepare to try to take down the 1st and 2nd Amendments, as Steve Quayle tells us, “at this point, we have to go on total ‘Normandie invasion’ against CNN and the ‘gun grabbers crew’ and ‘Helly-wood hypocrites’ and ‘genocidal maniacs’. Our days are limited and our lives if we don’t resist with all we have”.

With many recent stories below detailing the reason for Quayle’s warning, and no surprises that the globalists are targeting both the 1st and 2nd Amendments at the same time, let’s first take a quick flashback to the JFK assassination documents that President Trump allowed to be released in 2017 after decades of being censored via this October 2017 story from Zero Hedge.

During Operation Mongoose in 1960, the CIA also considered staging “false flag” terror events in Miami and blaming it on pro-Castro Cubans.

“We could develop a Communist Cuban terror campaign in the Miami area, in other Florida cities and even in Washington. We could sink a boatload of Cubans enroute to Florida (real or simulated). We could foster attempts on lives of Cuban refugees in the United States even to the extent of wounding in instances to be widely publicized. Exploding a few plastic bombs in carefully chosen spots, the arrest of a Cuban agent and the release of prepared documents substantiating Cuban involvement also would be helpful in projecting the idea of an irresponsible government.”

Knowing that these devils planned this kind of stuff over 50 years ago, and in Florida, is there any reason to believe that they wouldn’t resort to such terrorism upon the American people again to help them accomplish their satanic agenda? We look at story after story below which helps prove we’re witnessing such a diabolical and satanic plan now in action.

If what we’ve really been witnessing over the past decade+ has been an attempt to take down America, then its not surprising that the globalists would need to get all parties on board and what we’re seeing now from Broward County Law Enforcement offers us indications that they have long been happily on board with satan.

As Gateway Pundit recently reported, one Nezar Hamze is not only a deputy sheriff in Broward County, he is also the CEO and Regional Operations Director for the Florida chapter of CAIR, the Council on Islamic Relations. As the GP story reported, back in 2015, Hamze bragged that Broward County sheriff Scott Israel had immediately began investigating people who were ‘targeting’ the Muslim community.

While no truly peaceful community should ever be ‘targeted’ here in a free America, Barack Obama put a target on the backs of peaceful anti-war activists, US Patriots, Christians, Conservatives, 2nd Amendment enthusiasts, supporters of the US Constitution and preppers during his 8 years of running rampage all over the US Constitution.

So, why was Israel so ‘hands off’ of potential Islamic terrorists in Broward county? Also taking a hands off approach to crimes committed by children in the Broward county system, as Rebel Media recently asked, “why is Broward County Sheriff Scott Israel giving cover to a deputy who is part of CAIR leadership when CAIR has well-documented links to Hamas?” 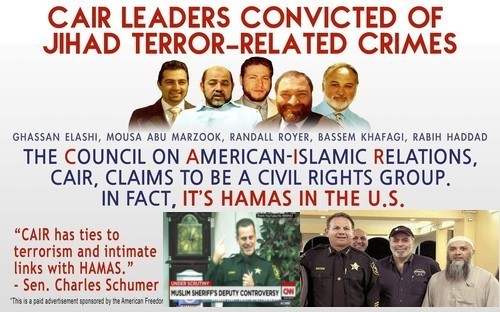 While we now know that there were at least 45 sheriff visits to the home of Florida killer Nikolas Cruz, as we hear in the 2nd video below from Rebel Media, Scott Israel’s disgraceful leadership is an embarrasment to law enforcement here in America. Yet, how many more ‘Scott Israels’ are floating around in America, devils in high places having sold their souls to Islam and prepared to do the wrong thing when American’s children are being slaughtered in their game of politics?