On February 23, 2018, ANP reported that entire archives of Independent Media reporting and videos had been flushed down the toilet, as the Google/YouTube purge of Independent voices, those that did not toe the official MSM narrative pushed by big tech and social media giants, had taken down names like the Richie Allen Show, The Ochelli Effect, and others, while other channels such as Jordan Sather had received their first “strike,” which we explained meant he was being targeted and his whole channel would be wiped out as well soon…… well, now it has been.

Read the original article linked above to catch up on how Medium purged conservative writers, Twitter locked out thousands of conservatives before restoring many after they were called out publicly for their antics, then read below as we show what has happened since, and provide some alternatives, because the all-out war is here and it is do or die time now. 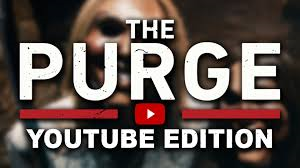 Since then, a massive purge has been undertaken by YouTube, and Alex Jones from InfoWars has been targeted, who now has been issued a second strike, leaving them one strike away from YouTube purging his whole channel as well. (YouTube then removed the second strike according to Infowars who shows screenshots of YouTube’s warning to them listing two strikes, then another showing the second strike no longer listed)

Steve Quayle has issued an alert  about Jones, calling on readers to pray and intercede, where he states “The whole evil cabal, of the globalist attack dogs, has been loosed against the alt media in a full court press,” as he then highlights how they are now targeted Jones, in a must-read warning to us all. As Steve states, this is “Freedoms Last Stand.”

Over at SHTFPlan, we see another popular video uploader Ron Johnson, who spoke with SGT Report, telling them “they’re stepping it up. Something is in the works. Something’s in the pipelines because they don’t want independent media covering the news,” as he describes what they did to his channel, which was Christian News, stating “we saw this coming [censorship attempts], it was just a matter of time. In September we got two strikes and they booted us off YouTube for three months. We came back in January and we started broadcasting live probably about a week or two before we got ‘canned’ on YouTube. And the strikes just started to come in.  One strike came in, we got an appeal, we won it, a couple days went by and we got another strike, and then another strike, and then another strike. They were looking through all the old videos; anything that might trigger a snowflake…extraordinary.”

“This is very Orwellian, 1984. They’re not even changing history, they’re just erasing it,” says SGTReport. Mockingbird CIA media. He then asks if he believes the YouTube purge is over videos surrounding the incohesive events of the Parkland, Florida school shooting. Johnson agrees that the purge going on now is of those questioning the government’s story they spoon-fed the mainstream media and expect people to believe. “Anyone who isn’t a part of the inspires me,” says SGTReport.

Whether we or you listen to one, all or none of these individuals is not the point, the point is they are attempting to silence all voices that do not conform to their preferred political ideology, in a synchronized attack via Google search, YouTube purging of accounts, social media shadow-bans, lockouts and bans, and it is time to start working around them in as many ways as possible.

While YouTube is busy purging all opinion they do not approve of, especially in regards to their preferred narrative about the recent Florida High School shooting, claiming the videos are “harassing” or “abusive,” they haven’t done a thing about the Queer Kid Stuffchannel that openly admits to targeting children aged 3-7 years old for indoctrination into the LGBT lifestyle.

If THAT isn’t abusive, what is?

I see people like Sather creating another account at YouTube to attempt to rebuild, while also utilizing BitChute to build another base of core followers elsewhere, but why even bother uploading content to a platform that has already proved and is in the midst of a mass purge of Independent voices and content?

Alternative Video Platform: Remember we reported that YouTube was furiously working to scrub a video of the Media’s new favorite poster boy for gun control David Hogg as he was being coached and practicing his lines for a CNN interview? I replaced that video no less than a dozen times, but the Internet does not forget nor does it allow even the biggest of tech names to totally disappear proof that doesn’t conform to what they want the public to believe, so we found an embeddable version over at DTube.

Granted the embed function works a little differently, but this is a war and if Independent Media has to learn how to navigate new sites, ones that are hell-bent on allowing an open platform without the censorship being seen elsewhere, then so be it.