Cryptocurrencies are starting to look like Dot Com bubble companies as nearly half have collapsed without having a viable product by Ken Schortgen, Jr. The Daily Economist

The middle to late 1990’s was a unique period in financial history as trillions of dollars were pushed into equity companies all because their business models were tied to the internet craze.  And when the dust settled following this Dot Com bubble crash in 2000, the majority of these companies simply disappeared because they never really had any viable products or services.

2017 saw the rise of a new market mania thanks to the evolution of the Blockchain and the success of cryptocurrencies like Bitcoin.  And in many ways this craze is looking exactly like the Dot Com era since the number of crytocurrencies rose from 600 at the beginning of the year, to over 1300 by the end of it. 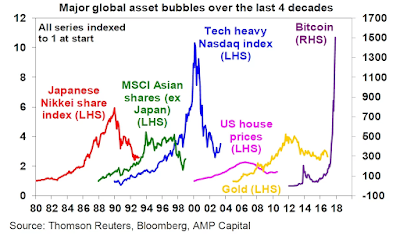 The total value of all cryptocurrencies in the world will hit $1 trillion in 2018, the CEO of one of the world’s largest digital wallet platforms told CNBC Monday.

There are over 1,300 cryptocurrencies in the world such as bitcoin and ether with the total market capitalization totaling over $587 billion, according to data from industry website Coinmarketcap.com. Market cap refers to the total value of all of the digital coins in circulation. – CNBC

However 2018 has not started out the way most cryptocurrency advocates have imagined it would, and in a new report out on Feb. 25, nearly 50% of all the cryptos created last year have already fizzled out in a similar way that Dot Com companies did almost two decades ago.

According to Bitcoin.com and Tokendata, around 902 cryptos were launched in 2017. Forty-six percent of this number have fizzled out since then. Some failed right from the funding stage, while more either ran off with the money or could not get enough publicity. A few of those that ran off with investor money even managed to raise over $10 million (about P500 million).

Apart from this 46 percent, around 113 are classified to be semi-failed. It’s either due to the lack of activity in social media or a community that’s too small to support the fledgling cryptocurrencies. – Inquirer

Interestingly however, one of the areas within the cryptocurrency sphere that has grown here in 2018 are the resource or commodity backed cryptos, especially those being backed by physical gold.  And in many instances these companies are also building payment systems as well as banking models which provide alternatives to the current financial systems being run and controlled by sovereign entities.

There was alot of money to be made for the quick and agile during the Dot Com bubble, just as there is today in the mania that is cryptocurrencies.  But as we are also seeing today, the sudden demise of these cryptocurrencies is mirroring the sudden demise of most internet based companies who sought to simply profit from the feverish markets of the late 90’s, and the greed of individuals looking for a fast buck.