In the wake of every single mass shooting in America, liberals trot out their war on the Second Amendment by focusing on the National Rifle Association (NRA), berating millions upon millions of law-abiding gun owners for the act of one individual, that isn’t even a member of the NRA, because said individual decided to go on a killing rampage.

I know, it doesn’t make sense, but neither does blaming an inanimate object rather than casting the blame where it belongs, the person behind the weapon.

HUGE DIFFERENCE: LIBERALS THREATEN TO BOYCOTT – CONSERVATIVES JUST DO IT

One of liberals favorite things to do in their predictable war on the NRA, is to go onto social media and start organizing a boycott against any company that advertises, or provides discounts to NRA members, and just as predictably, after liberal attack dogs threaten those companies by saying they will stop using their services if they continue their association with the NRA, many who most likely never use the targeted companies services to begin with, those companies cave in and break off association with the NRA.

The next thing that inevitably happens is the news spreads, liberals proudly tout their success, listing the names of those companies that caved to to their threats, then the final act in this predictably play is when conservatives, by the millions, actually stop using their services.

See the difference there? Liberals threaten to stop using the services IF the companies don’t comply with their threats, but those that believe in the constitution, gun owners, Second Amendment supporters, and NRA members all actually boycott their services. Not an organized boycott, just a grassroots middle finger to those companies. No threats, just message after message informing the company their services are no longer required and will not be considered for future use.

No threat, no ultimatum…. just action.

That is exactly what is happening right now, after the Parkland high school massacre that killed 17 people, as four cowardly Broward County police officers stood outside, not bothering to go in and confront the shooter. After the FBI failed to follow up on multiple reportsinforming them that the shooter was going to carry out an attack against a school. 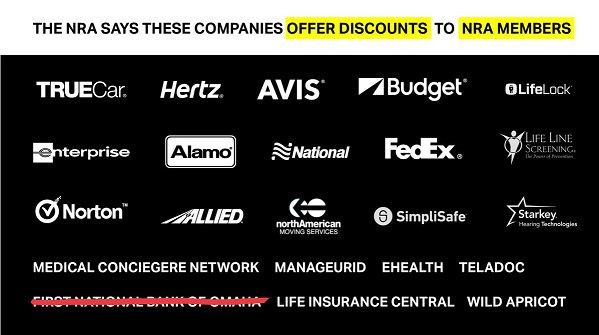 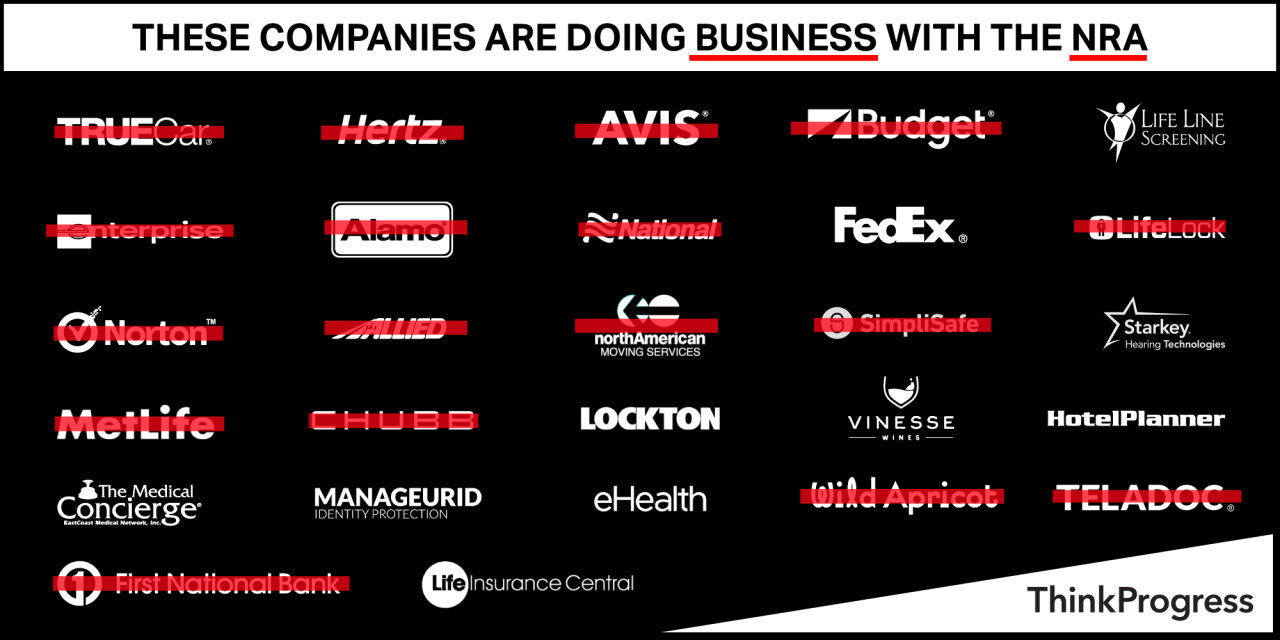 This may be the first time in history that ANP actually says thank you to Think Progress and Mr. Legum, for providing millions of  Second Amendment supporters, gun owners across America, conservatives, and every person, whether they are a NRA member or gun owner or not, that believes in the constitution, a list of companies to stop using in the future or to stay away from if the need for said services comes up.

Let me provide two clear examples of why I say liberals harass companies with a “threat” while conservatives just stop using the services of those that cave to those threats, or take political stances that alienates more than half the country to appease the other half, instead of just refusing to allow their company to be used as political tools.

Via Twitchy we see the types of messages were sent to the Enterprise car rental company via social media, with user Go Harvard which stated “@Hertz @Budget @Avis @Enterprise @Avis  Guess I’m boycotting your companies until you stop giving discounts to the NRA. More $$$ in their pockets isn’t what we need.”

Notice the ultimatum given, we will boycott until you cave to our demands.

Now look at an email ANP recieved from a reader, which was a copy of a communication sent to SimpliSafe, who told Think Progress “We have discontinued our existing relationship with the NRA.”

My husband and I were planning on ordering SimpliSafe. However, your politically-correct decision to boycott the NRA has led us to boycott your product. Considering SimpliSafe is a security company and has dissed the 2nd Amendment of the United States, your decision seems counter-productive.

SimpliSafe will now suffer a boycott from plain old folks like us. Please grasp this: We are many, strong, and have a very loud voice. Remember Target’s and Starbuck’s politically-correct decisions blunders? We, as a group, have not graced the doors of these establishments and their stockholders/employees have felt the financial repercussions.