Pretty hard to write when you find yourself literally speechless, definitely not something usual for a writer, but what I found this morning, example, after example after example…..etc etc etc, chilled me right to the bone.

Years worth of videos, interviews from The Richie Allen show with 76,000 subscribers and 1,400 videos, along with years of work by The Ochelli Effect Radio Show, gone, wiped out, as both were terminated from YouTube for “violations,” with Jordan Sather having been blocked from livestreaming for 90 days after his video titled  “2.15 – FL Shooting/NSA Incident/Other Articles & Cosmic/UFO News.” His YouTube channel has 117K subscribers.

In Sather’s case, they have just started, now that he has been targeted, they will go through all his other videos, find another two violations just as they did with Allen, and most likely terminate him as well.

It isn’t just Google’s YouTube though, no, this is more insidious as we are informed by Wikileaks Founder Julian Assange, that the website Medium, has wiped out the entire article archives of Independent writers such as Mike Cernovich, Laura Loomer and Jack Posobiec. 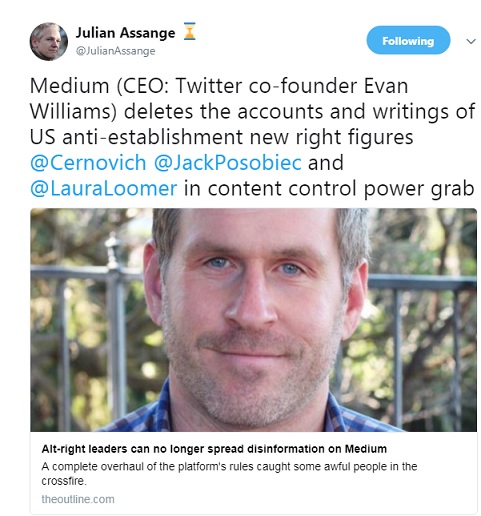 Gone….. just gone. Use any search engine, search for Medium and their names, click their links that supposedly lead to “Latest stories by (insert name)” and you are redirected to Medium’s generic suspension page, with the message “This page is unavailable.”

This week Twitter locked out thousands upon thousands of real people, assuming they were bots, for most likely talking about God, Country and guns, as Project Veritas had recently filmed members of Twitter saying those are the types of words that are flagged to teach their algorithms what to consider a bot.

My Twitter account lost over 250 followers in the #TwitterLockOut, and by the end of that day, after forcing these people to prove they were real, Twitter restored well over 200 of those followers for me, thousands across the platform. They assumed they were bots, you know, guilty, of being big bad Russians, until proven innocent.

THE COMMONALITIES OF THE SILENCED

What do all these people that just saw all of their video/articles archives wiped out have in common? They do not conform to the official “narratives, they challenge thought, they bring unfiltered information, some wrong, some right, but they throw it all out there and let readers take up the gauntlet, discuss, debate, learn and decide for themselves.

Look at the Richie Allen Show, who warned a day before his whole YouTube account was terminated, when he was notified of a second strike over a video interview from 2015, that it was going to happen. On Friday Allen provided a statement on his website, explaining the types of content he provides:

I repeatedly stated yesterday and I do it again today, that I am not important, certainly no more or less important than anyone else. I have not been personally targeted. It isn’t about me. The content and the information is being targeted, in my case, three and a half years of interviews with conspiracy researchers yes, but also with hundreds of academics, scientists, mainstream journalists and politicians beings asked questions about conspiracies, something which has never been done before on this scale. Like I said yesterday, I had been warned on several occasions that the show (not me) would be targeted for this reason. One well known journalist who writes for a national newspaper told me that “they” would never stand for a show like that, a crossover show if you like. I don’t know about that, I mean, I broadcast from a home studio, I am self sufficient, there’s nothing “they” can do about that. While I can be booted off YouTube, the live show cannot be stopped, although I have been informed by some of the same sources, that OFCOM (the UK broadcast media regulatory authority) is going to come after internet broadcasters who stream live content as opposed to pre-recorded podcasts. My show is a live show first and foremost and a podcast second. I’m told that this year, as part of its campaign to target hate speech online, the UK government is going to outline plans to regulate independent media. Therefore, what happened to me yesterday was only the beginning.

Read his entire statement here, where he provides multiple methods to listen to his live shows, since none of his 76,000 subscribers can listen to him on YouTube anymore. On Facebook Allen informed his followers “My YouTube channel is gone. They deleted it around 15 minutes ago. Share as wide and as far as you can. 76,000 subscribers, 1,400 videos. Gone.” 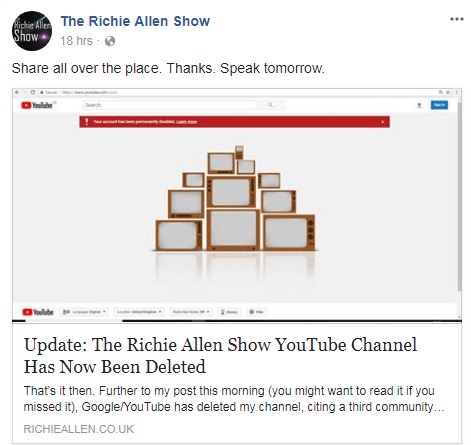 The Ochelli Effect, hosted by Chuck Ochelli, who YouTube also terminated, self-describes his work as “a conspiracy realist, Chuck covers a vast array of topics such as the assassinations of JFK, MLK & RFK, the 9-11 cover up, the police state and the multiple wars on terror just to name a few….”  Image below, via Ochelli’s FB Page.