“All it takes is a single article, and everyone else picks up the story.”- 4chan user

Question: What do you get when you have a large group of rabble-rousers at 4chan, using a voice chat program to plot and scheme, mixed with the mainstream media looking to find a narrative that fits their agenda? Answer: A fake news story that goes viral, to which millions of Americans that still trust the mainstream media now think the “fake news” is true.

HOAX ABOUT FLORIDA SHOOTER BEING A ‘WHITE SUPRAMIST’ BEGAN ON 4CHAN

The day after Nikolas Cruz was arrested for opening fire at a Florida high school, killing 17 people, the Anti-Defamation League (ADL) claimed in a headline “Florida White Supremacist Group Admits Ties to Alleged Parkland School Shooter Nikolas Cruz,” in article that has since been updated to reflect how they were conned into helping to start the fake news story, after the AP, ABC News and others had already used their initial false and manufactured claim to push the false narrative into the minds of millions as it spread across the internet and into many MSM publications.

“A spokesperson for the white supremacist group Republic of Florida (ROF) told the Anti-Defamation League on Thursday, February 15, that Nikolas Cruz [….] was associated with his group,” the ADL reported. The ADL quoted a man named Jordan Jereb, who runs the small group, which is based in Tallahassee.

“Jereb added that ROF had not ordered or wanted Cruz to do anything like the school shooting,” the ADL wrote in a blog post that was quickly picked up by ABC News and The Associated Press, and later percolated through dozens of other media outlets. Even The Daily Stormer, a neo-Nazi website, picked up the claim.

That is how fake news is created these days by the MSM. They run with an unverified article by the ADL, reporting on something the ADL was told by some guy, get the police to waste their time debunking it, as the Leon County Sheriff’s office later stated they found “no known ties” between the ROF group and Cruz, but not before it went viral across the Internet.

According to reports this campaign to create a fake news viral story began on 4chan, which apparently understood just how easily they could dupe the MSM, as they discussed how they would convince the mainstream media that Cruz was a member of a white supremacist group, plotting much of their way using Discord, which is a voice chat application that allows multiple people to speak online together from wherever they are, even sharing screen shots of their discussions with members of the MSM, while crowing and celebrating every time a MSM source reported on their fake news.

Donovan called this an instance of “source hacking,” a tactic by which fringe groups coordinate to feed false information to authoritative sources such as ADL researchers. These experts, in turn, disseminate the information to reporters, and it reaches thousands of readers before it can be debunked.

“It’s a very effective way of getting duped,” Donovan said.

The ADL traced its original tip to posts on 4chan, where researchers found “self-described ROF members” claiming that Cruz was a brother-in-arms. But many of those posts seem to have been written specifically to deceive reporters and researchers.

On Wednesday, an anonymous 4chan user posted about receiving a message on Instagram from an ABC News reporter after making a joke suggesting he knew Cruz.

“You have to take advantage of this,” a third chimed in.

He asked for proof of the reporter’s identity, according to posted screenshots from their correspondence. The reporter provided an official email address and sent a photo of an ABC identification badge.

Some on the 4chan thread joked about sending back obscene photos, but others gave concrete tips for tricking the reporter: “Keep talking to her so she gains your trust”; “Keep this going be realistic … say you have known him for years you met him on a Liberal Facebook page years ago and you have kept in touch”; “Say you are scared to tell her in case you get blamed, it will get her excited you know something big.” 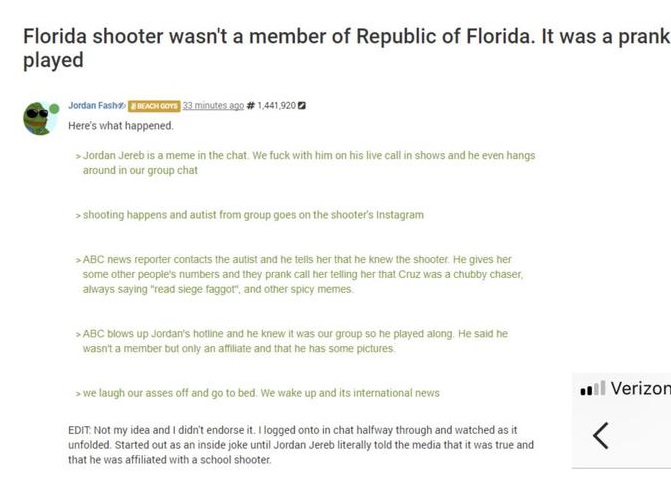 That was just the beginning of 4chan’s efforts to troll the media, use their own bias and agenda driven reporting to dupe them and publicly humiliate them into spreading disinformation to Americans. At one point it appears this group of rabble-rousing internet trolls spent 18 hours on Discord “orchestrating, contacting ABC, being interviewed by reporters, etc.”